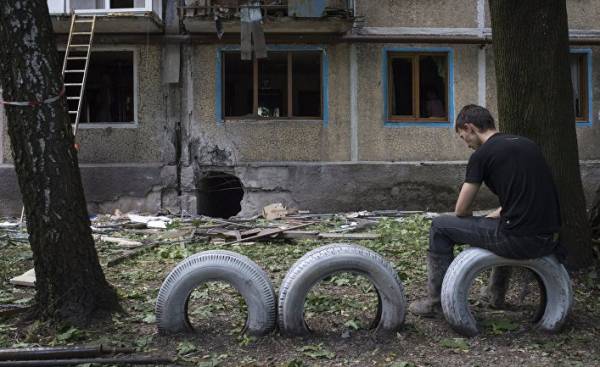 Kyiv — Donetsk — In Eastern Ukraine people are living in shelters for several years.

In the capital, Kiev, 700 kilometers from the front, preparing for a glamorous contest “Eurovision”.

“We need to think about something other than war,” says singer Jamal, who won the Eurovision song contest 2016 in Stockholm.

“Where can we go?” — asked Svetlana, whose family lives in the basement on the outskirts of Donetsk.

In Kiev, the spring, the sun is shining.

On the ring finger of the right hand at Jamala engagement ring with diamond. She’s getting married in April. The wedding will take place in Kiev, but most of her relatives and friends will not be able to attend.

They live in the South of Ukraine, on the Crimean Peninsula, which in the spring of 2014, Russia annexed.

We meet in an Italian restaurant, which is located on the sixth floor of the gallery boutiques. Jamal orders a latte and chicken soup, and then tells how the victory at the Eurovision song contest changed her life. Now she has a busy schedule of concerts in the country, in those parts that still belong to Ukraine, and in the big cities of Europe, and she is on the jury of the Ukrainian version of the Voice.

Death sentences Stalin: that’s why the song was written “1944”

But the artistic life gives 33-year-old girl and the opportunity to Express themselves politically. She rarely misses an opportunity to draw attention to the war in Ukraine and Russia’s annexation of Crimea. The song “1944,” which brought her the most votes at the Eurovision song contest, tells the story of the deportation of a quarter of a million Crimean Tatars during the reign of Stalin. One of the deportees was the great-grandmother of Jamala.

Now she and Jamal have three years can not return to the fold.

“I am very upset that I can’t come to the Crimea, are unable to meet with their loved ones there. This pain I took in the Eurovision song contest in Stockholm. I told the story about his family, the story of the suffering of the Crimean Tatars. It was important for me.”

It was criticized for the fact that the theme song was wrong for Eurovision, what she should sing about something more pleasant and joyful.
“But Europe believed in me and voted for me.”

In the cosy noise of the restaurant, on the street with expensive cars parked on Independence square, where tourists take a selfie, the war seems very far away. War, which to date has already claimed 10,000 lives, according to UNICEF millions of children are still in dire need of assistance.

In may, when in Kiev will host the Eurovision song contest, the contrast will become even stronger.

“We have to show that, despite the war, we can sing, create, develop, and fight, and no one can stop us,” says Jamal.

Half of the residents left the city

Olga Dudnikova and her three children awoke to the fact that the missile punched a hole in the kitchen wall. They were lucky that they were in the next room, and the house was built in the Soviet era and had thick walls in four rows of bricks.

Here, in the industrial city of Avdeevka, no other routine except the war.

We spent a day to get here. First seven hours on the fast train from Kiev to the East through the deserted snow-covered landscapes and settlements built around mining enterprises. We got off the train in the industrial city of Kramatorsk and went by car along the winding road to the East, where more and more frequent checkpoints. Finally, the front.

Half of the 35 thousand inhabitants fled, remained mostly families who work at the local coke plant. Some elderly people also left, but not by choice, but because they have nowhere else to go. They are completely dependent on assistance small humanitarian organizations and sympathetic neighbors.

On the other side hiding their armed countrymen

Positions of the Ukrainian army field watch for soldiers, this “no man’s land” stretched as far as the trenches of the rebels. Behind them you can see Spartacus, cottage village on the outskirts of the cities of Donetsk.

“Hiding the separatists,” explains the former Soviet soldier Alexander Drill, 50 years, who stands in position with a machine gun.
An invisible line. There, on the other side, hiding their armed countrymen. All Ukrainian soldiers, whom we meet, are convinced that the real enemy is the other Russia.

Soon we’ll go to the other side, after get permission from the Department of public relations of the self-proclaimed Donetsk people’s Republic. Let not all Western journalists. The local government prefers to spread distorted news of the turn of the Russian media.

We took three hours to get control, but ordinary residents of Donetsk are sometimes forced to stand in line all day. And if they start fighting, they can be stuck for a few days. Adults and children standing in the cold in line to visit their relatives and friends. Older people may need on the West side to solve the case with frozen pension.

“We need to stop this pain and sorrow”

If the winner of Eurovision Jamal will return home to Crimea or to the self-proclaimed Donetsk and Luhansk people’s republics in Eastern Ukraine — it will grab.

“Sure,” she says and tells how the critics of the ruling groups were accused of espionage.

At Jamala have friends who sat in prison for more than a year after such charges.

For her relatives, the situation has not changed since the moment she sang “1944” in Stockholm last spring. Those who want to leave Crimea must go through long bureaucratic checks on the road, then take the bus, train or car. A trip to the Crimea occupies almost the whole day. Additionally, healthcare does not function. So she took her mother suffering from heart problems, to the Metropolitan hospital.

“The suffering and grief sooner or later must end,” says Jamal, “I’m in touch with my family and really want to see, but is the only way. I’m trying to hope for the best.”

Her last memory of home is left, when Evelyn, her sister, who is two years older, came home from a trip to Istanbul. They arranged a small celebration. Eating rice, a spicy dish of rice, beef and vegetables.

“Dad cooked pilaf, mother sang. It was a wonderful time”.

Natalia’s husband is fighting for the rebels

In the Kiev district of the big city of Donetsk, we see the same devastation as in the town to the West of the front line. We listen to the same stories: about children and women are injured or killed by missiles.

Stairwells hung with the info sheets about the different types of mines and munitions — how they look and what to do if you find them nearby.

Natalia, 35 years old, whose husband is fighting on the side of the rebels, has collected metal fragments in a coffee Cup. It is only those pieces that got into her small apartment. Her daughter Tatiana, age 16, was filled with debris, when he came out of the shelter where they were hiding from the shelling. When we sit in their kitchen, constantly heard a loud rumble, like far away there is a powerful thunderstorm. And every night, they say.

Too much blood has been shed, so that people on different sides could come to terms — as I think many of those with whom we spoke. 80-year-old Valentina Gerasimovna, crane operator retired, who lives in one of the damaged by bombing houses of Donetsk, is one of them.

“How can we unite if they bombard us?”

The same question we repeatedly hear from people on the West side of the front.

Svetlana works, picking up the pieces

Cottage village of Spartak, who with his machine-gun position sees soldiers Alexander Drill, the — Ghost town. Many houses collapsed, others have huge holes in the walls.

Before the war, there lived five thousand people. Now there are about 50.

As well as in Kiev, shining spring sun. Svetlana Grekova and her roommate Valentina Pleshkova are in the shed in the yard between the two houses, from the chimney of the barn goes up in smoke. Thanks to the cast-iron stove they can cook outside and not in the basement, where they live with their families. From the pan rises the aroma of beet soup, borscht.

Svetlana, her husband and daughter sleeping in a room without Windows. Down there, lit by a weak light bulb connected to a car battery.
Svetlana’s missing a few front teeth and she looks older than his 48 years. She shrugs at questions about life in the basement of an otherwise abandoned building.

“Where do we go? We have no money. All that we have here.”

Local authorities gave her a job that brings a small income. She is picking up the pieces after a night of shelling. She falls asleep bomb craters.

Daughter Mary slowly walks in the snow past the bombed-out houses, returning home from school. Victoria with her daughter Valentina Pleshkovo. They met when all the other kids left.

Suddenly there was the distant sound of engines. Svetlana Grekova, 48, warns us is military hardware. After three years in the midst of war she knows what it means.

“You must go, — Svetlana speaks, — will Soon begin the fights.”