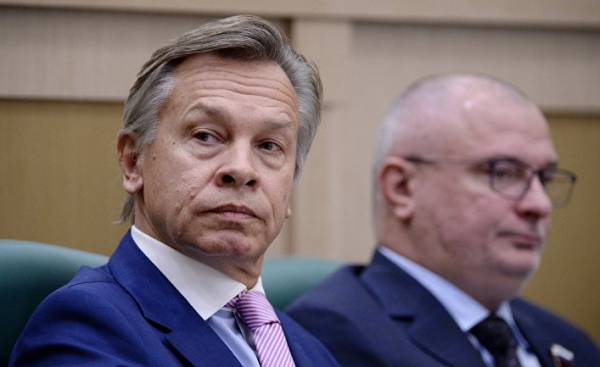 Well-known Russian politician Alexei Pushkov believes that Donald trump (Donald Trump) was not the worst option possible candidates for the presidential election in the United States.

From the point of view of Russia, the presidential election was only one unwanted figure.

“Clinton campaigned on anti-Russian basis. Its purpose was to continue the confrontation with Russia”, − said a member of the Council of Federation of the Federal Assembly of the Russian Federation Alexei Pushkov in an interview with Iltalehti.

“If Obama relationship was bad, then under Clinton, they could have been much worse. Would be closed all the way to improving relations.”

Cannon, for many years the former Chairman of the State Duma Committee on international Affairs, now heads the Commission of Council of Federation on interaction with mass media and to improve legislation in this sphere. In Russia, Pushkov is a well-known television personality and is included in the circle of confidants of President Putin clearly pursuing a foreign policy of the country.

Correspondents of the newspaper Iltalehti was found with Pushkov at the hotel in Munich during the International security conference. In this hotel stopped by the President of Finland Sauli Niinistö (Sauli Niinistö).

In the Finnish press claimed that the Kremlin began to open bottles of champagne as soon as the election trump became apparent.

“I don’t work in the Kremlin, so I don’t know what happened there. But I can say that we in the Federation Council did not drink champagne”.

Cannon still sees a lot of positive in the fact of election trump.

“First, he was the alternative. Secondly, he is a man who has no political burden of the war in Iraq, Libya, wars in Yugoslavia, coup in Ukraine or support the jihadists fighting against President Bashar al-Assad in Syria. And behind it all, Clinton was”.

Pushkov recalled that trump said about his desire to improve relations with Russia.

“He was not afraid to say that refers to Putin with respect and try to find common language with him, although the West is tough and the broad campaign against Putin”.

Pushkov believes that Russia and the U.S. can come to an understanding, first and foremost, in the fight against the terrorist organization ISIL (banned in Russia — approx. TRANS.). Another collaboration too early to tell.

“Differences accumulated quite a lot. I hope that Russia and the United States will gradually begin to solve them.”

But is Russia was not so pleased with the results of the presidential elections in the United States primarily because it affected their outcome by using information operations in cyberspace?

In addition, in the press in detail about the close ties of the closest associates trump with Russia, mainly in the field of Economics.

“The myth of informational influence of Russia established by supporters of Hillary Clinton to explain her defeat and raise doubts as to the legitimacy of the election trump”.

Pushkov surprised how financed by Russia channel, Russia Today to compete in the struggle for the opinion of Americans with major local television broadcasters.

He also recalls how the Democratic party acted during the election campaign against another candidate Bernie Sanders (Bernie Sanders).

“While important was only that supposedly the Russians told in Wikileaks as it was. The Russian pulled back in order to divert attention from the real causes of the scandal.”

But did not Russia is trying to influence elections in different European countries — in France, Germany and even Finland?

“This anti-Russian point of view has a place in media,” cannon confirms.

“According to the White house, allegations of staff of the trump in relations with the Russian special services have not been confirmed. Similar statements in America and Europe are fake”.