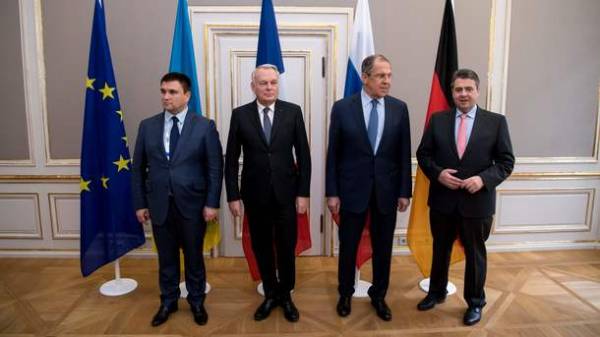 The Minister of foreign Affairs of Ukraine Pavlo Klimkin revealed the details of the negotiations, “Norman Quartet” at the level of foreign Ministers on the sidelines of the Munich security conference.

According to him, the meeting was literally very hot.

“We helped German and French friends. By the way, I am very grateful to the Minister for foreign Affairs of Germany, which is at a temperature of 40 very consistently led the meeting. We focused on bezopasnosti level and on the humanitarian level. Firstly, it is, of course, a cease-fire. Since the Russia-backed militants violated any agreement on a ceasefire. What happened today, when the ruined house, what happened yesterday, when destroyed houses and killed citizens, it goes beyond any political logic,” – said the Minister.

According to him, he, together with Western partners put pressure on Russia to provide special monitoring of the OSCE mission the opportunity to control the situation.

“We tried to make a ceasefire happened tomorrow, but now,” – said Klimkin.

As reported, the negotiations, “Norman Quartet” at the level of foreign Ministers lasted less than an hour.