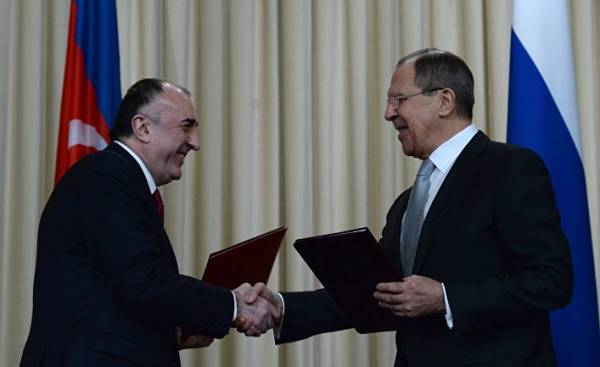 The statement made by the Minister of foreign Affairs of Russia Sergey Lavrov after the meeting with Azerbaijani foreign Minister Elmar Mammadyarov, of course, was not unexpected. But it has already become the reason of many debates.

Recall that after the talks with his Azerbaijani counterpart foreign Minister of Russia said: “We hope that the Karabakh conflict is amenable to settlement. This is indicated by the results of many years of contacts, the results of which failed to develop a common understanding of the key issues subject to settlement. This, above all, security issues, humanitarian issues, the return of the regions around Karabakh is now controlled by Azerbaijan, the status of Nagorno-Karabakh (of course, taking into account the views of those people who live there), the parameters of the international peacekeeping forces. Most of these aspects of a final settlement we have consent”.

But also according to the Minister of foreign Affairs of the Russian Federation: “the Two or three specific topics that are key to the final package are still being discussed. I won’t lie, we are still far from being able to see the situation when the parties will develop a common approach to these remaining issues.”

First, note that Lavrov said nothing new. In fact, he introduced the fundamental principles of Karabakh conflict settlement, which have long been known as the “Madrid principles”. At least, it’s the same basic approaches: the recognition of the status of Karabakh, the return of some of the liberated territories and the placement of peacekeeping forces. The rest, that is how status is determined, which areas can be returned, which should be used the principles of deployment of peacekeepers, as well as Lavrov mentioned two or three topics that are still being discussed, are only flowing from the basic principles, details. But if the question of the principles on the conflict settlement, the Minister of foreign Affairs of Russia was nothing new, his words were very serious signal related directly to the conflict resolution process. We are talking about the following…

First, we note the fact that for a long time about the settlement on the basis of “Madrid principles” say the co-chairs of the OSCE Minsk group, that is, Europe, France, USA and Russia. Have long this topic is discussed at the negotiating table. But also keep in mind that at any time these countries can move the peace process at a decisive stage, and in this case, neither Armenia, nor Azerbaijan will be able to stop them. That is, in the current negotiations, the parties are trying to draw in the framework of the “Madrid principles” that red line, to cross which they will not be ready. It is clear that Armenia, too, the settlement of the Karabakh conflict according to these principles is not the best option. For the Armenian society it is very hard to think about the possible return of some liberated territories. But at the same time have a rather wide layers of Armenian population formed the idea that this may be the forced option, with which Armenia will have to agree to in exchange for recognition of Karabakh’s status. That is, in the case of global coercion this option for Armenia would be relatively easier to take that gives the best possible manoeuvre in the current negotiations. But in the case of Azerbaijan, quite the opposite. Since 1994, Baku has been building its internal policy in the Karabakh issue exclusively within the framework of the principle of territorial integrity. This is something you can understand. If the question was only of Karabakh, Baku would hold perhaps a different course. Well Azerbaijan has several national minorities, which is concerned with the question of national self-determination, therefore, “a few of Karabakh”, and self-determination of one of them, if not today then tomorrow can become not only an example but also an internationally recognized precedent for others.

Mammadyarov was in the role of listener

In short, if you use the global compulsion to resolve the conflict, which would imply the determination of Karabakh’s status, it will result in serious internal crisis, even in conditions created by Aliyev khilafat a monarchy. Not hard to guess that such a prospect repeatedly pointed out to Baku at the negotiation table, speaking with the idea of a postponed referendum, arguing that it is necessary to prepare the country for this turn. And returning to Lavrov, it is possible to guess that one of the two or three questions might be this one. Another thing is that the OSCE Minsk group has repeatedly given Aliyev the opportunity to prepare for the Karabakh settlement, regarding this was made many official statements. But Baku has always been starting to abuse this time, including war propaganda, instead of a peace settlement. Of course, again, asking for time would be absurd, however, one gets the impression that Baku is trying to move this way.

However, with all these technical details, we note that Mammadyarov did not react to statements by the Minister of foreign Affairs of Russia, made openly in his presence that “was able to develop General ideas related to key issues to be resolved,” including on the issue of status. Moreover, in his speech Mammadyarov voiced the one thought that Russia is making serious efforts to resolve the conflict. And that is what should be considered the main signal. That is, first of all, in the matter of principles the position of co-chair countries is not changed. And second, the Minister of foreign Affairs of Azerbaijan is to be silent and listen, desperately saying, “what do I do, Russia is making serious efforts…”

Of course, not only because this episode creates the impression that the day is near when the process of settlement of the Karabakh conflict will be a priority in the international agenda. On the one hand, the Syrian army continues to be active and successful attack, and in the neighborhood is already over the release of Iraqi Mosul. That is a big conflict in the Middle East is coming to its climax. And it increases for Russia, the priority of the issue, a complete communication and economic transparency of the Caucasus region, given that economic direction has launched a number of global processes. First, on the agenda of the meeting Lavrov-Mammadyarov, in addition to Karabakh, was the question of railway communication Russia-Iran. And besides, during the meeting of intergovernmental Council of EEU countries in Bishkek was seen entertaining episode.

And here, at the meeting of the Prime Ministers of the EEU was also decided to give instructions on drafting a provisional agreement on creating free economic zone between Iran and the EEU. Under the temporary refers to the fact that on the agenda there is also a draft agreement on free trade between Iran and the EEU. Preparation and signing of this document require quite a long time. So now you create a single temporary point where the EEU and Iran to develop economic cooperation in the free mode. Not hard to guess that this is possible through the free zone in Meghri. If this option is justified, it turns out that the Prime Minister manages to make Meghri economic trade area between the EEC and Iran. Probably, given this mechanism, there is also the prospect that Meghri will be on the Silk road.