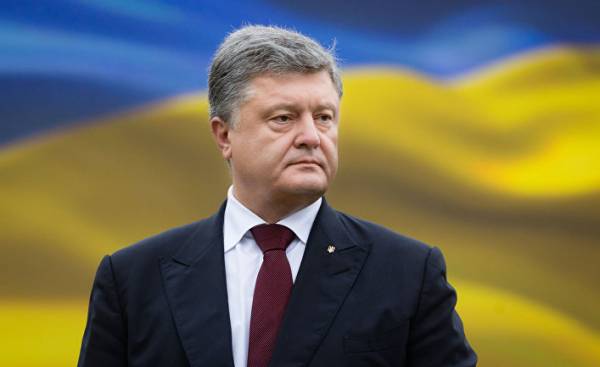 The President of Ukraine Petro Poroshenko spoke at the 53rd conference on security in Munich, Germany. The text of the President’s speech published on his official website.

“First and foremost I would like to thank Ambassador Ischinger (Wolfgang Ischinger (Wolfgang Friedrich Ischinger) — German diplomat, since 2009, Chairman of the Munich international security conference — approx. ed.) for many years the opportunity to have a discussion about the critical issue of global and European security. I would also like to thank Chancellor Merkel and all EU leaders for their personal involvement in the process of strengthening security in Europe and the return of peace in the Ukrainian land.

Let me begin by famous quotes of 1938. “I bring you peace for a generation. We are deeply grateful to you. Go home and good night’s sleep”. End quote. These are the words of Neville Chamberlain in defense of the Munich agreement. Most likely, these words were inspired by the promise of the Nazis, immediately after Munich, that they will have no territorial claims in Europe. As we all know, appeasement was a mistake. One should never believe in the good will of someone who has proven that he has no goodwill. But we know that then it would be right to do that, to stay strong in unity. And perhaps it is a historic call to all of us since 1938. The call from all the people who had to die in the next few years, because someone “slept” at the wrong time.

Dear friends, thank God that the policy of appeasement towards aggressive and revanchist Russia is not in line with Western policy. However, I hear more and more Intrusive appeals for peace, at least to some extent, relative to the appetites of Russia. To move in this direction it would be naive, wrong and dangerous. Not only for Ukraine but for Europe and for the world. This will lead not to peace but to further destabilization. Let me explain why.

Putin is deeply and sincerely hates Ukraine. I know that personally. He denies the identity and the unique identity of the Ukrainian people. He publicly proclaims Ukrainian identity, the dominant part of Russian identity. He does not see Ukraine’s place on the political map of Europe, and he wants to paint the place for Ukraine Russian colors. But it would be a mistake to think that the appetites of Russia limited only by Ukraine.

Let me remind you of a story that speaks for itself. Last year, in November, President Putin participated in the ceremony of awarding the winners of the Russian geographical Association. “Where is the boundary of Russia?” he asked one student in the audience. “Over the Russian border in the Bering Strait with the United States,” the student answered. It was the right answer, but Putin has corrected the boy and said, “Russian border does not end anywhere!” Despite the fact that he said afterwards that it was just a joke. It is not so! This is the doctrine, and many countries in the European Union or outside of the Atlantic — have already felt this doctrine in action. And there’s only one time and one place in order to resist this doctrine and to stop the emergence of Russian revanchism. The time is now. Place — Ukraine.

Dear friends, this is absolutely a historic opportunity for all of us. But above all, this is a historic opportunity for the new U.S. administration and a strong transatlantic unity. And I got the assurance that a few minutes ago during a conversation with new U.S. Secretary of state Rex Tillerson, who confirmed our unity, as the President said Duda (Andrzej Duda, the President of Poland — approx. ed.) and Senator McCain, and our solidarity. This is exactly what we need right now.

This is a unique window of opportunity to soft power showed its power. But this window is too small in time and possibilities. The only sin of the Ukraine that my country had once decided to live independently on their own land, according to our democratic values. We want freedom — Russia wants to punish us for it. I have the honour to present here a 45-million-strong European nation. On their behalf let me assure you that we will never agree that someone somewhere will determine our fate without us. Any deal behind our back will be instantly strongly forfeited the millions of Ukrainians who have proved the ability to fight for their independence.

We do not intend to surrender and ready to defend our country. My message is very simple — nothing about Ukraine without Ukraine! Any deal with Putin behind Ukraine will only worsen the situation. Support of Ukraine is the only way to stop the continued aggression and to return Russia to the path of respect for international law and world order. Let me remind you: Ukraine has done more to preserve peace and stability than what we got in response.

First, nothing can cheer us more than keeping the promises to the partners and maintaining transatlantic unity and solidarity of the Transatlantic community.

Secondly, there is nothing that will sober Moscow, as the determination of the West in enforcing red lines through tough sanctions. Sanctions is our asset, not liability. They are a manifestation of our strength if they remain in force. But they are a manifestation of our weakness, if you take them back. Stop diplomatic pressure on Russia or easing of sanctions before Russia would withdraw from Donbass and Crimea will further aggression. Why do I have the right to say so. Because in the last 24 hours my people lost three soldiers. 12 were wounded, most of them in the plant. Russian artillery shelling of peaceful neighborhoods. 1 civilian was killed by Russian artillery in recent days, another 2 were wounded. You must understand the price we pay now.

Thirdly, nothing inspires us more than the open and inclusive European Union in relation to his Pro-European partners and allies. The European project is much more sustainable than is the Kremlin. The values that lie at the heart of this project greatly exceed the phobias that are used to intimidate the Europeans. The faith of Ukrainians in the European project and its values is stronger than faith in the core of Europe. I can assure you that Ukraine is now the most europtimistic country on the European continent. And I am proud to be the leader of this good country in the current environment.

Let’s not repeat the dramatic mistakes of the past. Let’s show the aggressor the place that he deserves. Let us consolidate our unity and solidarity. So we could make the world for our generation and return home to sleep well”.