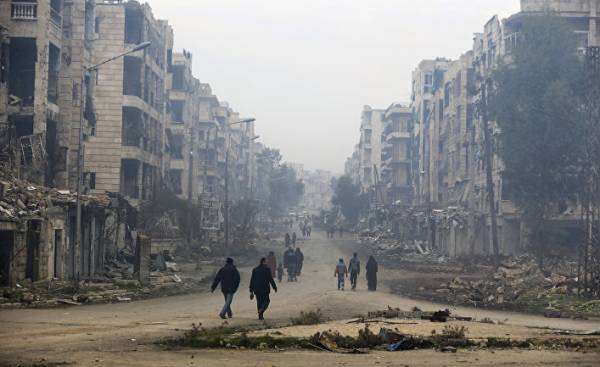 The Russian draft of the Syrian Constitution contains many oddities and flaws, but we should not overestimate their importance. This project is in the plans of Moscow performs a utility function, and it does not really matter whether he passed or not. It is more important to push the process of discussing the future political system of Syria, provoking the emergence of alternative draft Constitutions.

The next round of Syrian talks, which took place in January in Kazakhstan, did not bring breakthrough results. The Syrian government and the part of opposition groups that agreed to participate, refused to sign the final joint statement. However, without new initiatives, the talks in Astana still left Moscow there was made the draft new Constitution of Syria.

For all its unexpectedness proposed new Constitution fits into the overall strategy of Russia in the Syrian conflict. Taking advantage of the transitional period in Washington, Moscow decided to seize the initiative on the Syrian track and try to define its rules of the game as conventional. This is what was sent to the Ministerial meeting of Iran, Turkey and Russia in Moscow in December last year, and the ensuing meeting in Astana. From the point of view of the Russian leadership and its situational allies, the logical continuation of this local initiative should be an extrapolation on the Syrian track, that is to the talks in Geneva.

Therefore, Moscow now pays great attention to the upcoming meeting in Switzerland, because according to its results it will be possible to assess the success of a joint mediation efforts of Russia, Iran and Turkey. The Geneva talks are very important for Moscow from the point of view of reputation, because if they fail, Russia will not be able to write off all on the destructive role of the United States. Moscow will have to make contact with those who have recently considered terrorists, but also to create conditions to make the impending meeting in any constructive.

It is the solution to this image and to what extent strategic for Moscow task and sent to the Russian constitutional initiative. Indeed, in the recent Geneva negotiations the parties failed to discuss the constitutional reform in Syria, as it was provided by resolution No. 2254.

The most futile way is to expect that the Constitution will be written by Syrian forces. Mistrust between supporters and opponents of the regime is that parties still not ready to engage in direct negotiations. Therefore, there is no doubt that any draft Constitution proposed by the Syrian authorities, will be unconditionally rejected by the opposition and Vice versa. Not to mention the fact that in opposition the viewpoint that the Constitution is not worth writing as long as not resolved the question of the future of Bashar al-Assad.

If to write a new Constitution outside of Syria, then there will inevitably arise at least two serious problems already faced by the Russian initiative. First, greatly hampered by the bad experience of neighboring Iraq, where the Constitution was written with the direct participation of the United States. More about this in Astana, said the representative of the Syrian opposition Yahya al-Aridi.

The second problem is that the mediators are both the parties of the Syrian conflict, which casts doubt on their impartiality. For the Syrian opposition to Moscow and simultaneously the judge and the opponent, therefore, the Russian draft Constitution initially causes the rebels rejection, despite his versatility. However, a similar initiative by other external forces likely would have caused similar negative reaction from one of the parties to the Syrian conflict.

Without Arabs and Islam

This probably explains the rather universal nature of the proposed Constitution, which is a sort of Russian manifest ideal scenario for Syria. This is confirmed by the amount of Russian project almost twice shorter than the current Constitution — and very common phrases, which abound in almost all the articles of the Basic law potential. Moscow is clearly trying to avoid provocative wording, leaving out the most controversial aspects.

A vivid example — the fifth article of the Constitution, which describes the future political structure of Syria. It States that “the political system is based on the principle of political pluralism and the formation of bodies of state power of the secret way.” It is obvious that in this form this article does not add to an understanding of what will appear in the future political system of the country, and such a formulation can easily offer anywhere in the world.

However, with all the versatility in the Russian version of the Constitution can be traced several trends, which, apparently, will be discussed in Geneva.

The first thing that catches the eye is a complete rejection of the use of the word “Arab”. This also applies to the new name — the Syrian Republic (now the Syrian Arab Republic), and other articles, from where disappeared, such terms as “Arab nation”, “Arab civilization” and so on, while the Constitution of 2012, in excess. This step, of course, possible to calculate the assignment of the Baathist regime, whose slogan “the Arab nation is unified, sacred mission” still remains unchanged, but the assignment of this very symbolic.

Another in some sense for the Arab world the revolutionary innovation lies in the fact that the Russian Constitution does not mention not only the Arab nation but also Islam. Many have linked it with the position of the delegation of Bashar al-Jafari in Astana, insisting that Syria must remain “secular and civil state.”

Now the third article of the Syrian Constitution States: “the Religion of the President is Islam and Sharia is the main source of legislation”. This entry is the business card of most of the Arab regimes that actively appeal to this article to legitimize their rule in the eyes of the Muslim population, and to restrict the political rights and freedoms of opponents, citing violations of the norms of Islamic morality.

Some of the vague wording of the Russian Constitution, potentially can play into the hands of the Assad regime. For example, the already mentioned fifth article, which obliges political parties to “respect the constitutional order, democratic principles, sovereignty and territorial integrity”. With this formulation, any opposition party could be outlawed on charges of, say, the violation of democratic values.

Another important aspect of the proposed project is the redistribution of power between center and regions. No specifics in this regard are not seen: article 15 only gently brings the problem of “relations between local administrations and Central authority” of the jurisdiction of the Constitution in the jurisdiction of a certain law that still need to be taken.

The only standalone unit that is mentioned in the Constitution, — Kurdish cultural autonomy, which, however, immediately aroused the disapproval of the Kurds themselves. At the meeting with Sergey Lavrov, the representative of the Kurdish party Democratic Union Khaled Issa said that the very definition of a “Kurdish cultural autonomy” is incorrect and should be replaced by “autonomy in Northern Syria”. This question is clearly fundamental: both terms do not yet have a clear geographical reference, and carry a huge potential for conflict. The Kurds will probably have the power to back up their claims to the desired area. 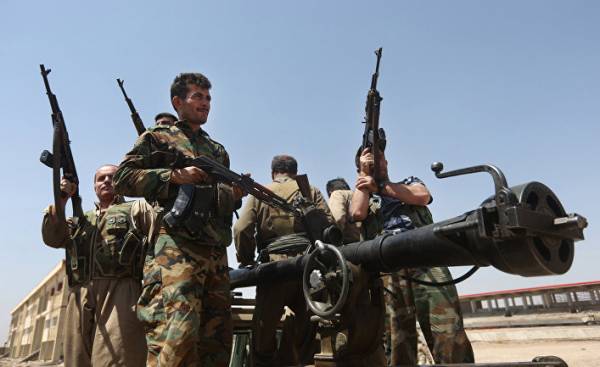 © AP Photo Hussein Malla, FileБойцы Kurdish paramilitary Peshmerga before the fight with the militants of the “Islamic state”

Changed and legislative power in Syria, which according to the Russian project must be submitted to a bicameral Parliament. That is in Syria will be a new institution — the Assembly of the territories, which shall “ensure the participation of representatives of administrative units in the adoption of legislation and government”. Its functions include the appointment of judges of the Supreme constitutional court, as well as “endorsement of the decision of the President about introduction of state of emergency and the Declaration of mobilization”.

For “multinational and multiconfessional” Syria, such an idea seems quite logical, but the effectiveness of the upper house of Parliament still raises many questions — the Russian project does not designate the administrative unit from which to select representatives to the Assembly areas.

Finally, though the proposed Constitution and restricts the powers of the President as compared to the existing, still retains in Syria, the existing form of government — presidential Republic. This further exacerbates the issue of the possible participation of Bashar al-Assad in the upcoming presidential election.

The answer can be found in the section “Final and transitional provisions”. And the answer is clearly a step backward even in comparison with the Constitution of Syria. The Russian project provides Bashar al-Assad the opportunity to reset the counter of their presidential terms. Article 82 reads: “the Term of office of the incumbent President of the Republic ends on the expiry of seven years from the date of his oath as President. He has the right to run again for the presidency of the Republic. The provisions of the Constitution on the term of office apply to it starting with the next presidential election.” In other words, Bashar al-Assad remains the legitimate President until 2021, when the term of his current mandate, and then will have the opportunity to extend his stay at the head of state for another two seven-year terms.

The idea of preserving presidential Republic in Syria is questionable. Foreign players are more inclined to divide the country into spheres of influence, and therefore, Syria will have to learn from the Lebanese experience, which involves transit in favor of a parliamentary Republic. However, in this scenario, the risks are also missing. Fixing the current status quo, there are no guarantees that the balance of power will soon change and will not provoke another round of civil conflict.

However, to overestimate the importance of certain provisions of the Russian draft Constitution is not worth it. Apparently, he fulfills the plans of Moscow utility function, and it does not really matter whether he passed or not. It is more important to push the process of discussing the future political system of Syria, provoking the emergence of alternative draft Constitutions.