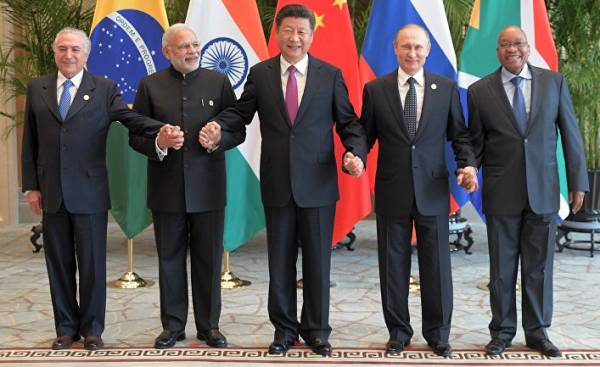 Turkey, which after the heads of governments of great Britain and Germany took the head of the CIA can’t move away from Pro-Western, profilakticheskoi, Pro-NATO policy. It is known that in talks with foreign guests on the table were new demands from Syria to Cyprus, from state system to privatization. A presidential regime and a new Constitution was also in the programme. Turkey, which gave Greece 152 plot of land in the Aegean sea (18 of them have the status of Islands) and went from Turkish territory in Syria, where the tomb of Suleyman Shah, sacrifices and Cyprus, in bins of energy. Imperialism spares no one.

For example, the Chairman of the Commission on investigation of causes of the occupation of Iraq, sir John Chilcot (John Chilcot) diligently sought out the truth about what kind of position in the course of events in Iraq took one of the former Prime Ministers of great Britain Tony Blair (Tony Blair). He wrote a book about imperialism, diplomacy and intelligence, which concluded that military action was a last resort. During the occupation killed 179 British soldiers, Blair acknowledged its responsibility. But Chilcot, who for seven years worked on the 12-volume report followed on the heels of Blair. Chilcot pinned to the wall of Blair. Last when giving evidence about the occupation were inconsistent, evasive, admitted some of his mistakes and said: “the war can not do without mistakes.” The dressing, hosted by the former leader of the UK, which is considered loyal strategic partner of the United States, is not accidental. Just as not a random British exit from the EU…

British diplomacy, which are so skillful that they are able to remove socks without taking your shoes off, do not make mistakes in such a fundamental question. Nothing is left to chance. So, the British Prime Minister, may said that the UK will again discuss the customs Union agreement with the EU will come out of the single European market, will abandon common trade policy and gradually out of the EU. Britain wished to retain free trade with the EU, which would ensure the maximum possible access to the single market. In addition, in the UK, which intends to conclude free trade agreements with all its allies from different regions, primarily the United States, will have the force of a decision of the European court of human rights.

Back to our country… We often repeat: changing needs — changing alliances. And cons of each Union is born the new Union. Based on this, countries take up their positions. For example, while the EU expands, UK out of the EU… Russia, on the one hand, working together with China in the framework of the Shanghai cooperation organization (SCO) and BRICS, on the other — takes joint actions with her such structures as the Eurasian economic Union, Eurasian economic community, Organization of Treaty about collective security. On the proposal of Russia and with the approval of China Turkey in 2017 will be the chair of the energy club of the SCO, in which it is a partner in dialogue. This year, the SCO is prepared to put at the table India and Pakistan as members. This step of the SCO, despite the competition between India and China, the tensions of India and Pakistan, the proximity of India with the US and UK, demonstrates the level of trust in the organization. Note that India’s membership promoted Russia, and Pakistan — China. In addition to these two countries, also addressed the full membership of Iran.

We often emphasize: in our political, economic, industrial, technological age the weight of the world is shifting from West to East, from the Atlantic to Eurasia. Russia has the most extensive territories in the world, it is rich in energy resources… China is the most populous country of the globe, the world’s factory, the second largest economy in the… India is the second populous country in the world, which along with China is one of the fastest growing economies of the subcontinent, whose share in the world consumption of energy is growing rapidly… China in contrast to the world Bank and the IMF refers to the financial strength, investment and elements of soft power… In the BRICS Bank, the Charter capital of which is 100 billion dollars, China invested more than $ 40 billion. The largest contribution to the SCO Bank — again from China. For the implementation of the new silk road project, known as “one belt, one road”, China has established an investment Fund of the silk road. In the first phase, he allocated $ 40 billion. For the project, which covers an extremely vast area, from China to Russia, from Turkey to the Balkans, from Spain to Germany, he said, “don’t ask me for money, come to me with projects.”

While Turkey still has no comprehensive, consistent, coherent Eurasian strategy. Nevertheless, Turkey stands as the country with the largest production capacity in the region, stretching from East Germany to West China. The trade turnover between Turkey and China is $ 28 billion, with the balance in China’s favor. China’s exports to Turkey ten times the volume of Turkey’s exports to China. China, which invests more than all investment in the world, there are about 750 companies in Turkey.

Dependency relationships are of a structural nature

The calculations of imperialism against our region is known for. What terrorist organization he uses the proxy wars too see everything. Assistance in the 1980’s the US provided the Mujahideen fought against Soviet Union in Afghanistan, later gave birth to “al-Qaeda” (banned in Russia — approx. ed.). After the Gulf War of 1990-1991, the United States actually cut off the North of Iraq. The occupation of Iraq in 2003, more institutionalized this structure. When the power vacuum in Iraq has compounded the situation that emerged after the civil war that began in Syria in 2011, Iraq found the point of support of ISIS in Syria — “al-Nusra” (banned in Russia — approx. ed.).

Against this background, Turkey acts together with the Free Syrian army (FSA). This organization, which has neither the will nor the ability to fight, Turkey attaches completely undeserved importance. Turkey does not see that while she supports the SSA, it will not be able to build a trusting relationship with Syria, Iran and Russia. Turkey believes that such an unreliable organization, how SSA can cope with the Syrian forces and with the terrorist organization ISIS. And deeply mistaken. That is why the operation “Shield of the Euphrates”, which is fair, proper, legitimate, but, alas, too late, despite the military success, can not give the result in political terms. This is because Turkey has no coherent regional policy. She can’t safely make the necessary political steps. She is unable to build a real communication and cooperation with the countries of the region.

The question stems from knowledge. To find the right answer, you need to properly raise the issue. Let’s ask: why imperialism, which occupies and divides the different countries of the world, wants to unite Cyprus? Why Turkey must completely withdraw from the Islands, while the UK has two bases in southern Cyprus (Agrator and Dekelia)? Why Turkey is shy to turn to Eurasia in the period when the UK leaves the EU and is increasing its trade relations with China?