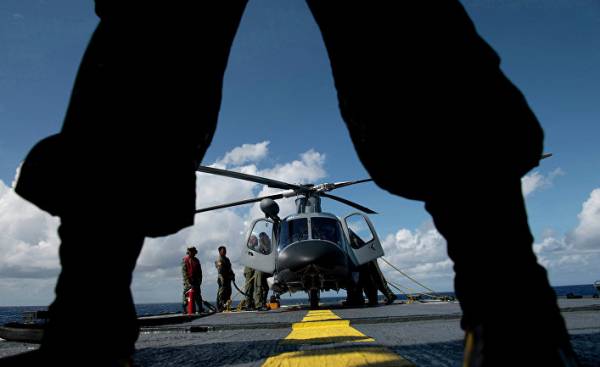 The President of the Philippines Rodrigo Duterte should strive to involve the members of ASEAN, including China, to combat robbery at sea to strengthen regional cooperation.

On 31 January President Rodrigo Duterte once again demonstrated their faith in China, stating during the procedure of bringing Filipino soldiers to the military oath, he turned to China with a request to patrol international waters near the Philippines to help in the fight against piracy.

Duterte implies the Sulu sea. According to the International Maritime Bureau, in 2015 the share of piracy in South-East Asia was 71% of the total. In the past year, the number of kidnappings at sea peaked in the 10-year period.

Last year, the Philippines, Malaysia and Indonesia have agreed to carry out joint Maritime operations in the territorial waters of the three countries. The purpose of the so-called initiative to patrol the Sulu sea is to achieve success patrolling the Straits of Malacca, which after its launch in 2004 has led to a significant reduction of attacks and kidnappings in the Strait.

However, the situation in Sulu sea is more complex. The sea is quite large, and military capabilities of naval forces and coast guards of the three countries is not impressive. And Malaysia, and the Philippines do not have enough patrol vessels and aircraft, which partly explains why Malaysia is planning to buy a Chinese coast guard ships. Despite the fact that the Navy of Indonesia, the largest in Southeast Asia, primarily they have to patrol the long coastline, which is also subjected to pirate attacks. In fact, more than half of the incidents in Southeast Asia, occurred in Indonesian waters.

Duterte right, that external help is needed to solve this problem. But China has considered his offer, it needs to provide detailed information, including the exact region where China can help. While he mentioned only the international waters to the South of the Sulu sea. Such ambiguity can lead to confusion, especially given the territorial dispute between the Philippines and Malaysia around Sabah, as the question arises, where exactly are the territorial waters of both countries.

His comments that the patrols can only deal with the Chinese coast guard, not Navy, also incorrect from a legal point of view. In accordance with international Maritime law, any military ships, military planes and other vessels in government service, you can arrest a pirate ship or a ship seized by pirates. Simply put, they don’t even need an invitation to do it because they are in the open sea.

Nevertheless, the Chinese and the Philippine coast guard can do to cooperate, if desired. During the visit, Duterte to China in October last year, the sides signed a Memorandum of understanding concerning the establishment of the Committee on coast guard and Maritime cooperation. Such cooperation may not necessarily be limited to the South China sea, where China and the Philippines have territorial disputes. It can also include the Sulu sea, where the necessary assistance of China. Countries could conduct joint patrols or jointly patrols with the participation of other stakeholders.

A good example is initiated in 2011 cooperation between China, Laos, Myanmar and Thailand: they carry out joint patrols along the Mekong river.
Similarly the Chinese and Vietnamese navies held 21 joint patrols in the Gulf of Tonkin.

China can help the Philippines in marine capacity development. Along with other stakeholders, China has for many years provided technical support to ensure the security of the Straits of Malacca. In the Gulf of Guinea, where piracy is rife, the greater part of the Navy of the littoral States are equipped with boats or light frigates from China. In addition, China may provide technical assistance and train the Philippine Navy and the coast guard.

Duterte can also ask for help in the Association of South-East Asia. In the end, the ASEAN community has the primary responsibility for the security of important shipping route in the region. More than 100 thousand ships pass through this route every year, taking on Board 55 million tons of freight and 18 million passengers. As ASEAN seeks to play a Central role in ensuring the security of the Asia-Pacific region, it must demonstrate its unity, responsibility and even the ability to combat piracy in Southeast Asia.

China should not be the only external force to which to turn for help. Since 2010, ASEAN countries are working with eight regional States in the framework of the Meeting of defence Ministers of ASEAN countries to consider such issues as Maritime threats in the region and so on. A number of naval exercises were held in the framework of the group’s Maritime security, but no real problem has not been solved. Can the working group start the discussion of the situation in Sulu sea? It is hoped that such discussions can eventually lead to operational interference. That is why group sessions to exchange information and resolve conflict situations, which were attended by representatives of the navies from more than 20 countries, have become useful in the fight against piracy in the horn of Africa.

If Duterte will be able to convince other ASEAN members and external powers to negotiate the establishment of the international transit corridor in the Sulu sea, the identical corridor in the Gulf of Aden, it will be close to success.