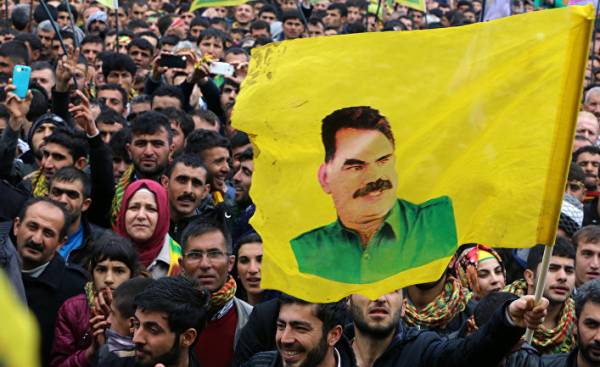 In this meeting took part the representatives of Iran, Iraq, Syria and Turkey, the countries of compact residence of Kurds.

Meeting in Moscow which the Russian government allegedly does not know, even know about electronic correspondence candidates for U.S. President, the Kurdish media? called “Kurdish national conference”.

News announcing the event, began to appear after the meeting that on 27 January the Minister of foreign Affairs of Russia Sergey Lavrov held in Moscow with the leadership of the Party “Democratic Union” (PYD). As you know, after the destruction of the Turkish Russian fighter aircraft violated the border on 24 November 2015, the PYD was allowed to open a representative office in Moscow.

Shortly before this meeting, Turkey has vetoed the participation of the PYD in the conference on the cease-fire in Syria, which was held on January 23-24 in Astana.

In fact, PYD and its military wing the people’s protection Units (YPG) — one of the parties fighting in Syria. But Turkey objected to the organization that is the sister of the banned Kurdistan workers ‘ party (PKK) in Syria, acted as ground forces of the USA in fight against ISIS (banned in Russia — approx. ed.). Turkey has repeatedly said that against one terrorist you can’t build a cooperation with another terrorist, and telling about it so far.

On this basis, Turkey has a fight with the US, its NATO ally, and was forced to start cooperation on the battlefield in Syria with a competitor, Russia.

In August of 2016 in the framework of the operation “shield of the Euphrates”, which began shortly after a coup attempt on 15 July, Ankara has tried to prevent the PYD supported by the United States established control along the entire border with Syria; so, thanks to the agreement reached with Russia, Turkey came to El-Baba.

Now for the next steps President Tayyip Erdogan waits for U.S. President Donald trump distinct signals. To further the position of Turkey will be affected by the PYD in place a new plan to combat ISIS, which trump instructed to develop the Pentagon.

But the head of trump is busy with other problems. Moreover, already at the initial stage almost everywhere in a series of scandals that led to the resignation of national security adviser Michael Flynn (as Michael Flynn), having ties with Russia. Russian intelligence, the FSB, as it becomes clear, was allegedly included in the process by which the right wing of American politics took the lead in the ranks of the Republican party and defeated the Democrats.

Therefore, while trump is waiting for the Pentagon, and the Erdogan — trump, Vladimir Putin intends to move forward.

Moscow by the civil war in Syria has re-established its presence in the middle East. It seemed that with the collapse of the Soviets forgot about it. So now it seeks to strengthen its position and in the process Rob US of the Kurdish card.

In other words, Russia wants to deprive the US of the Kurdish card to Turkey from a defensive position trying to prevent the PKK, and the PKK is not sitting idly by.

An interesting aspect of the Moscow meeting is that the Democratic party of Iraqi Kurdistan (KDP) headed by Massoud Barzani (Mesud Barzani) declined the invitation to them. Another notable moment: DPK is the age Mahabodhi Kurdish Republic, which was established in Iran in 1946 with the support of Moscow (and managed to survive for two years), and the founding father of the KDP, Mustafa Barzani (Mustafa Barzani) for several years, led by his party in the form of a General of the red army in a village near Tashkent in Uzbekistan under the Soviet regime. But at this stage of the duodenum, competing with the PKK, did not wish to engage in conflict neither with Turkey nor Iran, nor USA.

But you know what?

Date of the Moscow meeting. Here we also see traces of Russian diplomacy.

After all, February 15, 18 years ago, in 1999, Abdullah Ocalan (Abdullah Öcalan, the leader of the PKK — approx. TRANS.) was caught in Kenya in a joint operation of the CIA and the National intelligence organization (MIT).

This situation, which plays on the nerves and Ankara, and Washington, I can not find the accident.

Another interesting aspect is that the Moscow conference was attended by deputies of the peoples ‘ Democratic party (HDP) of Turkey, Osman baydemir (Osman Baydemir) and Dilek Ocalan (Dilek Öcalan).

Some time ago, two of these members of the Turkish Parliament were arrested and after questioning released from custody, with the co-chairs of HDP, Selahattin Demirtas (Selahattin Demirtaş) and Figen Yuksekdag (Figen Yüksekdağ) not been arrested. In other words, even the departure of the deputies for the border under the regime of a state of emergency to participate in this meeting, it would be useful to take into account in political calculations.

Perhaps before the conference on the future of Syria, which will be held on February 23 in Geneva, an attempt is made to open a new diplomatic door.

At the moment we have no idea what will Ankara if the US and Russia wish to PYD also took part in the Geneva process or, at least, in meetings, at the risk out of the equation Turkey, whose border with Syria is 910 kilometers.

Moreover, the sensing process associated with the referendum of 16 April is in full swing.

Therefore, I support the view that the conference in Moscow is particularly important: it will be crucial for the shape, which in the future will not only Syria but the middle East.