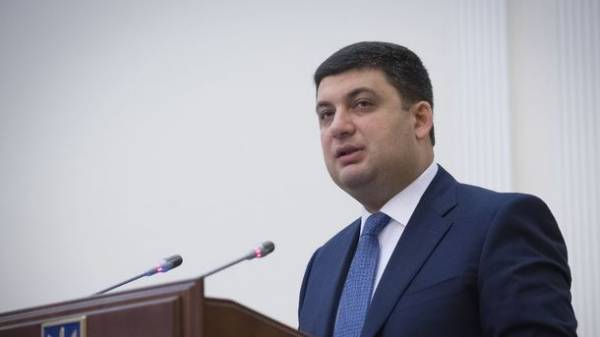 Entered into force by decision of the government emergency measures on the electricity market introduced because of the blockade of the supply of coal of anthracite, will prevent power outages and to work with those fuel reserves that were formed before the blockade. This was stated by Prime Minister of Ukraine Volodymyr Groisman.

“But we understand that if coal is not, the stocks decrease, we have no other way to be. And because we have introduced extraordinary measures in the electricity industry to work on those stocks that we are very efficiently formed”, – he said.

The Prime Minister reiterated that he opposes the embargo, which stops the enterprises and problems with the supply of heat and electricity to the citizens of Ukraine. But he fully supports the desire to restore order on the demarcation line and to fight smuggling.

“It is necessary to increase the control that the contraband was not” – said the head of government, stressing that such monitoring should be not only on the demarcation line, but also on all sections of the state border.

Recall that in Ukraine for the third week continues the blockade of Railways, which supplied the coal from the occupied territories of Donbass. February 16, the participants of the blockade on Donbass began to overlap more and road.

Today, February 17, in Ukraine the state of emergency in the energy sector.

Also, the national security Council at the meeting considered the issues of neutralizing the threats to energy security of Ukraine. In particular, Ukraine’s President Petro Poroshenko said the risks for the steel industry and the threat of declining foreign exchange earnings due to the blockade of Donbass.