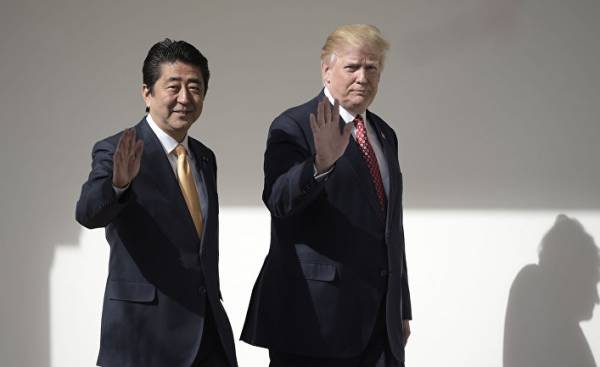 Recently, Prime Minister Shinzo Abe visited the United States, which was his first visit to America after joining trump as President. The sides held official talks, issued a joint statement and took part in the press conference, and played Golf. All of these actions look very warm and friendly.

It is easy to see that Abe’s visit has three objectives. First, the intention of using the new President of the United States obligations under the security in respect of Japan, to strengthen the us-Japan Alliance. Second, the dissemination of information about the “Chinese threat” to joint efforts of the US and Japan to create a situation of containment of China’s rise. Third, the presentation of a large “economic gift”, the promotion of stable development of U.S.-Japanese economic relations.

To achieve these goals, Abe has been carefully prepared and planned a trip, but the effect is unlikely to meet his expectations.

First, the Alliance between Japan and the United States, there are still problems to be addressed. The two leaders following the talks, issued a joint statement that the United States will use all military capabilities, including conventional weapons and nuclear weapons to protect Japan, this commitment is “unwavering”. However, this obligation is not gratuitous, Japan will have to pay the price. In recent years, the Abe government has caused discontent of the USA not too safe moving of us military base Futenma. During this U.S. visit, Abe issued a joint statement assured that the movement of base — “the right decision”, after returning to Japan, will inevitably increase the pressure on Okinawa. On the question of the costs of U.S. military forces in Japan, trump wants Japan to take on more responsibility.

First, trump is absolutely not to be written Abe “scenario” in the game of containing China. In fact, the United States and Japan reaffirmed the application of the fifth paragraph of the “Agreement on security between Japan and the United States” concerning the Diaoyu Islands, the parties also discussed the situation in the East China and South China sea, but it was mostly a re-statement associated with the reign of Obama. The administration of the tramp was not in a hurry to give Japan the support on suverenitete over the archipelago Diaoyu, USA very careful on Maritime issues, try to avoid direct reference to China. Even more awkward for Abe is that trump, responding to a question during a press conference, stressed the “friendly relations” between China and the U.S., and also noted the benefit for Japan from the advantages of Sino-American friendship.

In addition, in the field of trade and economic cooperation with the United States, before his visit, Abe made a great “gift” Trump, announcing that the Japanese side in the next decade invests 150 billion dollars in infrastructure construction and create in the USA of 700 thousand jobs and the market scale of 450 billion dollars. However, in negotiations with the U.S., the Japanese side deliberately avoids trading, monetary and other conflict points. Japan also proposed in the framework of the dialogue between the Deputy Prime Minister of Japan and Vice-President of the United States to build mutually beneficial U.S.-Japanese economic relations. Unfortunately, the Japanese “gift” difficult to implement, to the extent that even long-standing intention to export Japanese technologies for high-speed trains in the United States will not be able to satisfy the desire of trump. Thus, in Japan the growing concerns about trade friction between Japan and the United States, many representatives of the business community are questioning the effectiveness of Abe in the rapprochement with the United States for the sake of national economic interests.