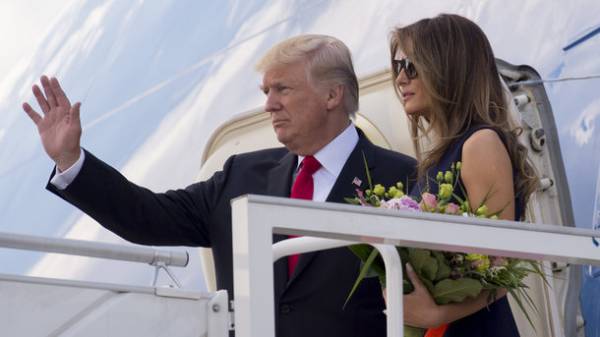 Before a two-day summit of “Big twenty” in Hamburg, which starts tomorrow, July 7, the US President decided to come to Poland. According to analysts and experts, Poland was not chosen by chance, because Warsaw is one of the few who spends 2% of GDP on defense. During a visit to Poland, and it was expected trump will declare the commitment of article 5 of the NATO Charter, under which an attack on one NATO member is an attack on the entire Alliance. And wait: the President has clearly affirmed that “the United States stand firmly for 5 articles”. Donald trump held talks with his Polish counterpart Andrzej Duda, and took part in the summit of heads of state of Crimora. This Polish-Croatian initiative, uniting 12 countries between the Baltic, Black and Adriatic seas. She was not particularly happy in Berlin, considering Trimore competitor of the European Union. It is no exaggeration to say that the personal involvement of Donald trump only added to the significance of the summit, which made us nervous official Berlin, whose relations with Washington are experiencing hard times. Delicate moment in the fact that the summit Trimore not invited Ukraine, although last year’s summit in Croatia Kiev were invited.

Came Donald trump to Warsaw together with his wife Melania, daughter Ivanka and her husband Jared Kushner on Wednesday evening. They stayed at the hotel Mariott, in which during his visits to Poland he lived predecessor trump Barack Obama. According to the Polish press, the visit of the American leader blocked almost half of the city. The movement of the presidential motorcade was designed so that the colon at any point of the movement was a 10-minute drive from the hospital where, if necessary, the American leader will save lives. Hotel Mariott trump and his family occupied the whole floor, plain Windows in the rooms replaced armored, all appliances were removed, replacing his.

Official visit to Warsaw began with bilateral talks Donald trump with his Polish counterpart Andrzej Duda. The result was the signing of the ministries of defense of the United States and Poland agreement on the supply of U.S. missile defense Patriot, which is specially adapted to counter Russian “Iskander” and the agreement on the supply of American liquefied natural gas to Europe. “The contract will be signed in Polish and American companies. At the end of the consultations, which are now, signed a long-term contract,” said Duda in a joint press conference following talks with trump.

The dates of conclusion of the contract neither Duda nor trump said. But in Berlin and Austria is strictly against the start of deliveries of us liquefied natural gas to Europe. “Today” already wrote that in the first place will hit the European oil and gas companies – partners of “Gazprom” on the “Nord stream-2”, which has invested in the project of the order of 9.5 billion dollars.

At a joint press conference Andrzej Duda said that he managed to negotiate with trump and the Russian military aggression against Ukraine. And the tramp, while their American journalists were caught off guard by the question about Russian intervention in the American presidential election.

On gas supplies to Europe: “We are the exporters of energy resources. If you need energy, give us a call, we are ready to sign additional contracts at any time”.

About Russian intervention in the American elections: “I think it was Russia. And I think it could be other people, other countries. Obama, when he was President, I learned that it was Russia in August. The elections were in November. Had a lot of time, but he nothing did. Why didn’t he do?”.

About North Korea: “I think we have to see what happens in the next couple of weeks and months with respect to North Korea. A shame that they behave. They are very, very dangerous. And something has to be done with it. I see some pretty harsh steps.”

About Ukraine: “We call on Russia to stop destabilizing Ukraine and other countries. And stop supporting hostile regimes in Syria and Iran. Americans, poles, other European Nations value freedom and sovereignty.”

On NATO: “For those who criticized our tough stance, the US is not just words, but actions have demonstrated that we stand firmly behind article 5 – obligation of mutual protection.”

Before a performance at the Krasinski square in Warsaw, Donald trump took part in the summit of Crimora. The unification of 12 countries called “Timore” was originally called “Memorie”, and greatly annoyed the leaders of the European Union. France and Germany regarded it as a serious competitor, so at the initiative of Poland, the Union was renamed “Trimerge”. If he unites the countries between the Baltic, Black and Adriatic seas, it is logical that it should take part, and Ukraine. And, according to the Director of the Institute of world policy Alyona Hetmanczuk in his blog for Ukrainska Pravda, Ukraine are outraged that we were not invited to the summit Tremora in Warsaw.

“It’s especially a shame because last year this invitation was received from another initiator, the Association – Croatia. Moreover, actively to join Ukraine to the initiative proposed and the President Duda during your memorable visit to Kiev on Independence Day last year and performances in front of the Ukrainian diplomatic corps. What happened? It was decided that this initiative should include only member countries of the EU. Although, according to available information, some countries-members of the initiative expressed its reluctance to see Ukraine at the summit, fearing that with our participation, the initiative will automatically come into geopolitical overtones of the anti-Russian flavor,” writes Alain Getmanchuk.

Moreover, the presence at the summit of Crimora Donald trump underlined the importance of Polish-Croatian Union. Opening the summit, the US President did not miss the opportunity to remind you that his wife is a native of Slovenia, which is also included in Trimore, and repeatedly spoke of the necessity of the existence of the new Association. “If you need energy, give us a call,” said trump. Moreover, the U.S. President stressed the importance of Poland in strengthening security all over Europe and once again reminded the member countries of NATO, how much to spend on defense.

The final chord of the visit of Donald trump to Warsaw began his half-hour speech on the Krasinski square with the Palace Krasiński, known as the Palace of the Commonwealth. Initially it was assumed that the American leader will speak at the Pilsudski square (named after Marshal Jozef Pilsudski, who was instrumental in the formation of the Polish statehood after the First world war). It was here in 1979 during his first visit to Poland Pope John Paul II held a solemn mass. But, according to the municipal authorities of Warsaw, for his speech trump personally selected the Krasińskich square.

In his speech, the US President thanked Polish soldiers for their participation in U.S. peacekeeping missions, again noted the new Union Timore, calling it historic and said that Poland is the soul of Europe. In Warsaw, in his first speech in Central Europe Donald trump confirmed the commitment of article 5 of the NATO Charter, and said that Russia must stop destabilizing Ukraine.

Today the US President waiting in Hamburg for the evening’s scheduled talks with German Chancellor Angela Merkel on the eve of the G20 summit.