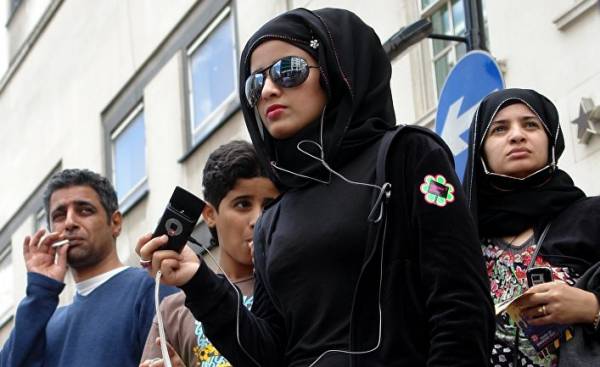 Cicero: Ms. Gel in Your book we are talking about a European Islam. What exactly do You mean?

Nilüfer Göle: This description of reality, which today is not considered. A reality that has long been observed in public life, but is not reflected in politics and the media. The majority of Muslims — the people who lead perfectly normal lives and want to achieve something.

— Why we have created the limited reality?

We live in a society where the foreground is often the most controversial aspect. Modern communication technologies simply do not reflect the diversity of opinions. In the media we increasingly see women all bundled up like it’s normal. The banal nature of real no interest, we are constantly in a region exceptional: on the one hand, terrorism, and the failure of integration of Muslims.

— How do you think, looks normal Muslim?

— I call those ordinary Muslims, whose parents may have been immigrants, but they themselves are not considered. They would like to participate in society. Of course, the radical part is not one of them. However, this participation is not at the expense of assimilation, it is due to the emphasis on their cultural and religious backgrounds. Of course, in mono-ethnic society, such a situation causes problems, but differences and conflicts in democratic States in order. And in spite of that, between Islamic and European values, there is a lot in common.

What are the common features?

European Muslims interpretiruya their religion every day — it is quite practical. At the same time they are part of the German language, French culture, Italian lifestyle. The Islam that they practice is different from the Islam that was adopted in countries with a predominantly Muslim population. When we talk about Islam, we often do it, looking down. How can governments create citizens who behave in accordance with European values. But at the level of practice we see Islam, which has long been based on the European experience. I’m so Islam met — watched, so to speak, from below.

— As it looked exactly?

— I wanted to create a platform where Muslims and other community groups could meet and discuss a specific topic. So at first I and my assistants collected information about what kind of event, for example, plans to build a mosque in any European city there is a debate. Then we found out, to whom it is directly relevant, and which organizations have the right to vote. We conducted separate interviews with these individuals, and then invited them to discuss in groups.

— No. I expected it to be a balance between Muslims and non-Muslims. In vain. Muslims came with pleasure, unlike non-Muslims, if only they were not the representatives of something. It’s about saying something. The debate in the media is determined not Muslims, and a desire to talk, to Express it is the Muslims.

You could briefly say how there was a discussion about the construction of the mosque?

— Questions raised are: How to choose the architecture? We will build a Moroccan or a Turkish mosque? Or she must like and local residents? That there choose, is a kind of description of the state of relations between Muslims and European countries. That is, it applies to all, not just Muslims. To the solution of these questions must be approached at the local level and in touch with real people. If they are “closer” to the level of media, it is only about fear, rejection and radicalization.

— What other topics have you discussed?

— The theme of Halal on the one hand, as the question of food, because Muslims don’t eat pork. On the other hand, the theme of ritual slaughter: there was a debate about whether or not does the animal too much suffering. Other major topics — the wearing of the hijab and “extreme visibility” of Islam. In all European countries there are discussions about these issues that shows how much Islam is Europeanized. My suggestion is to identify differences and then work together to think about how to overcome conflicts. But it is necessary also to listen to the Muslims who live here.

— So You are in favour of dialogue, not the laws that govern our life together?

Exactly. Today we think that public space should be regulated — always and immediately. We are trying to solve all problems with laws. I don’t think it’s right. First should always have a debate. Meanwhile, it seems that our debate again. For 30 years we are discussing the wearing of the hijab, the debate becomes more acute and leads to increased polarization. In Europe, we were talking about oppressed women, but did not communicate with them. Characters forcing people into the background, now it is the burqa, not the hijab. We abandon the search for consensus and immediately proceed to punishment, and regulation. To ban the construction of minarets — just as it happened in Switzerland. But then there is no debate.

— Who needs to change the discourse? Mono-ethnic society or Muslims?

— Both of you. First we need to create more conditions for interactivity. Currently, there are tendencies to the fact that mono-ethnic societies are to preserve the “purity”, and the Muslims position themselves as victims of discrimination, stigmatization and Islamophobia. The Muslims have to prove themselves as European citizens. After the terrorist attack in Berlin, for example, the Muslims opposed terrorism. I call it performative population, it is very important. Or the day of open mosques. Or arose in England a movement against Islamist terror “Not in my name”. You can consider it trivial, for me it’s vital.

— What concept do You actually use? “Integration”, “assimilation” or another concept?

— I apply the concept of “interaction” and “interaction of cultures”. If you are talking about integration or assimilation, you mean passive host society and assume that all the work will be done by others. But in a democracy we must work together to find ways to live together. Thus, the necessary adaptation of the double. And the first rule here is honesty. How people greet, already shows they have peaceful intentions or not.

— Do You mind those for whom this is all just too much work. Those who say they didn’t ask what others had come voluntarily.

— I think it’s just not realistic. And wrong, because Germany, in fact need, for example, migrant workers. While they were only workers and behaved discreetly, there were no problems. But if they settle in the neighborhood, their kids go to the same schools, they live in the same neighborhoods, there are problems. Test the strength of democratic abilities of the country. The problem you need every day to discuss while they are small, and solve. I belong to those who say “welcome” to the newcomer. For me we are talking about such concepts as Europe, the hospitality and creativity.

— French laicism useful to what You call the interaction of religions and groups?

In contemporary France, we see the border of laicism because it is more than identity, namely the way of organizing society. Historians say, for example, that “exile” of the hijab from schools is a departure from laicism. Now expect neutrality not only from States but also from its citizens. However, people can never remain neutral.

— Are there any European countries where this works better than others?

All European countries are trying, in accordance with laicismo, to squeeze Islam in a certain pattern. Laicism — a legacy of the history of France. The legacy of Germany — the Holocaust and its realization. Gender equality, freedom of speech, tolerance in relation to representatives of sexual minorities — these secular values are very strong in all European countries. Germany is ahead of other countries. France, for example, has long been not so innovative. Germany more doubts herself, what is tainted by the burden of the past, so there is more to deal with problems.

Often we hear requests of the reformation or the Enlightenment of Islam. What do You think?

Thus people avoid seeing the truth. So argue, saying that the task of the Muslims to reform their religion. However, in most cases, add that they should do it elsewhere — in Iran or Egypt, for example. And at the same time looking at others through the prism of their own history. Under the motto: we have it worked out, you should also be prepared. In General, it’s okay to judge others based on their own experience, and look for historical Parallels. But be aware of the current situation. Because Islam has already begun on-new itself to interpret — in schools, in universities. Lessons learned are partly very different. Reform must be sought in such different manifestations.