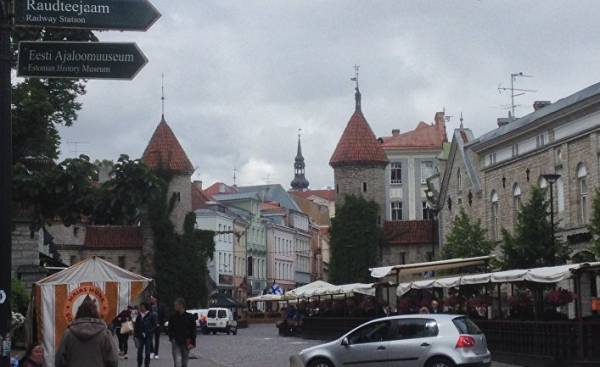 Would it be possible to someday drive around the Baltic sea on high-speed rail?

This dream became closer to realization after the Prime Ministers of the Baltic countries met on 31 January in Tallinn. The Prime Ministers signed an agreement under which the countries commit themselves to the construction of a railway Rail Baltic. It will be held from Poland to Tallinn.

Rail Baltic railway connection opens up opportunities for construction of tunnel passing through the bottom of the Gulf of Finland between Tallinn and Helsinki. In the Baltic sea is the construction of the tunnel between Germany and Denmark under the Strait of Fehmarn belt. The 18-kilometer tunnel will shorten the train journey between Hamburg and Copenhagen for half an hour.

But first, still need to build a road, Rail Baltic, which would begin in 2026. Trains on this route will go at a speed of 240 kilometers per hour and, thus, from Tallinn to Warsaw can be reached faster than it is now to Riga. Railways of the Baltic States have become obsolete, and between Tallinn and Riga is no direct connection.

The trip will make more speed and the fact that the track gauge Rail Baltic will be the European 1 435 mm and 1 520 and 1 524 mm, as currently in the Baltics. The train will cross the border of Poland and Lithuania.

Long discussed the project moved to 2015, when the Baltic States were created in Riga joint company for the construction of the road. All three countries have the right to veto decisions, so it’s already behind schedule. Often, a joint decision is made only when the project funding by the EU Commission is under threat.

Details of the route plotted on a map of the area in Estonia where a public discussion has ended recently. In Latvia the route approved. In Lithuania, discuss whether you will be a new railway line from Kaunas to Poland according to the old ways.

“I hope that Estonia officially decide on the route in March and April,” says CEO of Rail Baltic Baiba Rubesa (Baiba Rubesa).

South of Riga in Iecava town Valdis Pumpurs (Valdis Pumpurs) rises on a low hill. The terrain is almost flat, just fields and huge oaks. The road will pass through the fields, over the hill.

In Soviet times it was the land of the state farm “Progress”. Parents Valdis Pumpurs bought the land after Latvia gained independence. Now the field is rented, the road does not cause negative feelings.

“In my opinion, very good, that road will connect with the railway network of Europe, and the track width will be the same everywhere,” says car.

“Many rejoice in the fact that it is also planned to pave a new highway along the railroad tracks,” he adds. Due to this, not only will improve the message, but will increase the price of land.

In Iecava was four variant of laying the railway. Of them chose the one that passes mostly through forests.

The final route was not easy.

At Preiss − own ceramic workshop in the village of Skulte to the North from Riga. The road had to pass right beside the workshop. He participated in the creation of organizations that protect the rights of the local population.

The first answers of the authorities on the claims for compensation were, in the words of Preiss, arrogant and deliberately confusing. The organization has invited lawyers, gathered signatures and continued to write letters. After months of struggle have ensured that the road began to take place mostly on public lands. Now relations with ministries have become normal but still have some distrust.

“We considered many projects, they were the money spent, but nothing happened.”

In Estonia, the debate lasted six months. At the end of January in Tallinn held a demonstration against the construction of the railway, which was attended by 300 people. In the autumn of 101 public figure has demanded a stop a road construction project.

Opponents of the construction of the road was most talked about the ecology and economic unprofitability. Dissecting Estonia by the way, according to them, would impede the movement of forest animals.

The representative of company on construction of the railway robeza says that neither Estonia, nor Latvia, nor Lithuania are not fully aware of the exceptionality of the project. In her opinion, the project cannot be considered only from the point of view of its own economy.

“I always say that it is built for those who are now eight years old.”

She says the EU is ready to Finance the construction of a significant part of the road because it will connect continental Europe with the North-Eastern Europe. Its task is also the establishment of the economic corridor. Global flows are still subject to change, and the importance of the road will increase significantly.

The Commission is promoting the construction of the railway and also for environmental reasons. Carriage of goods by rail would reduce the amount of greenhouse gases.

Finland refers to the construction of the road positively. However, neither Finland nor Poland are not shareholders of the company. They act only as observers.

“If they were shareholders, we were able to advance faster. We depend on transportation from Finland”, − says the coordinator of the project Rail Baltic in Estonia, the Kristjan Kaunissaare (Kristjan kaunissaare kaunissaare).

Cargo shipment through the Gulf of Finland is constantly increasing, and for Finland the road would extend transport links with Central Europe. At the moment Finland does not have voting rights in the company.

“A very important project for us,” says Hilska Lassi (Lassi Hilska), senior Advisor of the Ministry of transport and trade of Finland.

Equity participation in the project is a political issue.

Finnish participation in the construction of the railway, according to Hilský, is not necessary to identify the construction project of the tunnel Helsinki-Tallinn. The decision on this project has not yet come completely, and it is a matter of the distant future.

About the tunnel started talking seriously after began the study of the railway project. Tunnel is often linked to the discussion of the draft rail journey to the Arctic ocean.

Biennium preliminary study of the possibilities of a tunnel halfway done. EU allots 1.3 million euros. The competition presents and new transport technologies. One of them is the so-called hyperloop (hyperloop): passengers will travel through the pipeline in capsules.

Most of the funding for Rail Baltic to be implemented by the European Union.

The length of the railway Rail Baltic from Tallinn to the border with Poland will be 700 kilometers.

The road should be built by 2026 and in 2030 it will transport two million passengers to nine million tons of cargo.

The project budget is 4 billion euros, of which the EU accounts for 85%.