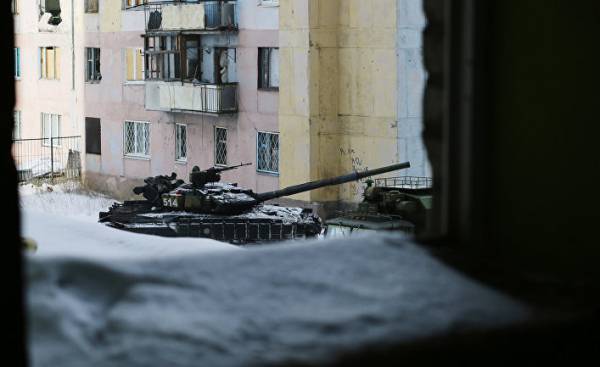 While Ukrainian forces exchanged shells with the separatists, supported by Russia, the inhabitants of the Town are experiencing a lot of stress and suffering.

Because of the noise of large and powerful equipment at the plant in Avdeevka not hear almost anything except artillery fire.

Since the war began in 2014 at the factory fell more than 300 shells. It is the largest coke plant in Europe located in the territory controlled by Ukraine, just a few miles from the line of contact with the Russian-backed separatists. Fortunately, within a few months of heavy artillery was silent, but for the last two weeks there was a new outbreak of violence, which Kiev attributed to the fact that Russia, apparently, cheered the victory of the trump in US elections.

In this new wave of violence reportedly killed more than 30 people, including civilians on both sides of the line, heavy weapons prohibited by the cease-fire, returned to the field. Avdeevka remained for a few days without electricity during the last battle, the most intense in more than six years, said the Organization for security and cooperation in Europe, which monitors the conflict.

Coke-chemical plant managed to avoid a direct hit, but the 36-year-old Elena Volkova, who worked at the plant for ten years, was killed during the shelling of her apartment building. It is the tenth plant employee who died since the war began.

“It would be nice if we could just go to work and not worry about the war, not to be constantly ready to rush to the ground, if you hear a particularly loud explosions,” says Michael, the supervisor, who works at the plant for more than two decades. As he talks, heard artillery fire.

As always, there were a flurry of mutual accusations and disputes about who started this round of fighting.

Kiev officials said Russia-backed separatists for some time been preparing for the offensive. “In recent weeks, according to intelligence reports, at least 170 cars with ammunition and 60 cars with fuel crossed the border from Russia. The attack was definitely prepared,” — said the Minister of foreign Affairs Pavlo Klimkin in an interview in Kiev last week.

According to Konstantin Eliseev, Deputy head of the presidential administration of Ukraine, the violence, which began within a few hours after a telephone conversation trump and the President of Russia Vladimir Putin, was “check the Russian side of the reaction of the new American administration and unity inside the European Union.”

However, all is somewhat more complicated. In recent weeks, Ukrainian forces are moving slowly. It seems that in this recent flare-up of what the Russian-backed rebels first opened fire from heavy artillery. But one of the Ukrainian soldiers based in the “industrial area” is the area of the front, where the warring parties are just half a mile from each other, — said the Ukrainians provoked the rebels to an aggressive response, taking a small section of the road.

“We knew exactly what to do, and it worked perfectly, he said. Is all our territory, in the end”.

During the Obama presidency Kiev could count on the continued support of Washington in connection with the conflict in the East of the country, which Russia is fueling the supply of fighters and weapons across the border. But the emphatic concentration of the trump on the improvement of relations with Russia is forcing Ukraine to worry about what the country can sacrifice for the sake of a Grand bargain with Putin.

“We hope that the Ukrainian issue will not be solved behind the back of Ukraine, — said Elisha. — We hope that sooner or later the new us administration will take a more active position.”

Trump has brushed off all criticism because of his praise Putin denied the information that to win he was helped by the obvious influence of the Russian campaign. “Both countries may cooperate to solve some of the many important and relevant problems and issues in the world!” — trump wrote on Twitter last month.

In the inconsistency of the message of the new administration towards Russia and Ukraine even US diplomats are not sure what position, ultimately, is the trump. Ukrainian authorities only have to read tea leaves, trying to see the scale of the trouble.

Meanwhile, trump’s adviser for national security, Michael Flynn (as Michael Flynn) resigned after intelligence suggested that he secretly discussed the sanctions with the Russian Ambassador in Washington, and then tried to hide conversations.

During an interview on Fox News, Trump was asked about the spate of violence that occurred immediately after his telephone conversation with Putin, and he gave the typical ambiguous answer: “We don’t know exactly what it is. It’s about power. We don’t know whether they are unmanageable. Is it really so? This also happens”. It is unclear whether he had in mind “Pro-Russian [power]” or “professional”.

Diplomats and analysts in Kiev believe that now Russia’s goal is not to capture most of the territory of Ukraine, and to return the already occupied region of Ukraine on terms favorable to Moscow that will create long-term support in the country.

“We need to bring Russia from Donbas: Russian troops and Russian mercenaries, weapons and all their tricks and indirect impact,” — said Klimkin.

This week he will travel to the USA, and it is hoped that the President of Ukraine Petro Poroshenko may be able to arrange a meeting with trump later this month. The two presidents spoke on the phone last week, but both sides hide the details of the conversation.

During a telephone conversation Poroshenko and trump has found “a kind of common language,” said Elisha, noting that both successful businessmen. Petro Poroshenko — a billionaire who built a candy Empire before turning to politics.

But Ukrainian President adds former Prime Minister and now opposition leader Yulia Tymoshenko, who managed to achieve a personal meeting with trump after the national prayer Breakfast in the United States earlier this month.

Advisers of the Ukrainian government told that she had caught trump on the way to the toilets. In fact, the meeting took place in a separate room and was scheduled the day before. “The Ukrainian delegation was literally speechless when I found out that the meeting will be held,” said the source, who was present at the Breakfast. Elisha complained that “not too well to allow any sort of policy to shake hands” with the President of the United States.

Timoshenko is a cunning politician, she has many supporters in the West, but in the past she did not hesitate to make deals with Moscow. She eagerly seeks to become President, and officials in Kiev believe that its intervention could further complicate the complex process of obtaining support from the administration trump.

In avdeevke of geopolitical problems seem very far, but no one wants to return to war, which in the last three years has turned people’s lives upside down. Musa Magomedov, Director of the coke plant, said it was time to find a political solution to the conflict.

Although he was born and raised in Dagestan, Russia, there is no doubt on which side his sympathies in the current conflict. “I was offered good money, so I went to the Russian plant, when the war began, but I refused. I am a citizen of Ukraine, I love Ukraine”, — he said.

Nevertheless, he spoke harshly to the “idiots in expensive suits sitting in Kiev”, who are calling for the resumption of military operations in the region. Magomedov believes that a political solution can stop the deaths.

“Let them try to sit in the trenches. The people here want to work, want to live a normal life, they are tired of this endless stress and suffering.”