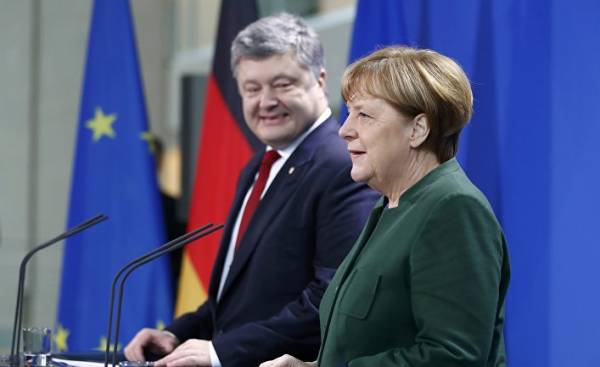 Kiev has to adapt to the unfavourable international environment. Between Ukraine and key allies, and then there are hotbeds of tension, the position of many countries about Russian aggression becomes less clear — mainly due to domestic reasons. The Ukrainian question is not included in the top 5 items on the agenda of the West. But this does not mean that Kiev was left alone with Moscow. To paraphrase a classic: if someone is not supporting you the way you want, it does not mean that he does not support you at all.

On whose help can still expect Ukraine to understand “observer”.

After the scandalous statement of the German Ambassador Ernst Reichel on elections in the Donbass in the Ukraine, spoke about the change of course Germany, accusing Berlin of almost betrayal. Good degree of diplomatic tension has been reduced, despite the fact that some Ukrainian politicians, as if he was finally and irrevocably to quarrel with a key ally.

Largely due to German pressure, EU sanctions have gone through periods of deep crisis, which for 3 years was a lot. Berlin provides financial, technical and expert assistance to Kiev and occupies a consistent position in the “channel” format. And don’t forget that before the Russian aggression, Germany has seen Russia as a key partner.

Because of Brexit, Britain concentrated on its own problems, and attention to the Ukrainian question, of course, declined markedly. But London still holds the strongest position in Western Europe regarding Russian aggression in Ukraine.

Illustrative is the article by the British Minister of defense Michael Fallon in January 2017. “We are not going to forget about Ukraine. We support our friends in both good and difficult times,” wrote Fallon.

Britain is providing assistance to Ukraine in reforming the defence sector (which, by the way, Germany is not solved). For instance, London gave Kyiv non-lethal weapons worth 1 million pounds. Help Britain also applies to economic reforms and fight against corruption.

In addition, Britain is the only country in Western Europe, which has consistently supported Ukraine’s membership in the European Union. Although due to the Brexit is, perhaps, not so important.

Lithuania, Latvia and Estonia actively supports Ukraine in context of European integration and to counter Russian aggression. Their capabilities are much narrower than in Germany and Britain. But to the best of their ability, they provide invaluable assistance to Kiev. For example, Estonia is a country that in terms of per capita, the most helping Ukraine.

The Baltic countries allocate funds to support reforms in Ukraine, as well as on treatment and rehabilitation of Ukrainian soldiers, families, and children from the ATO zone. They help to keep the sanctions front, and lobbying for the strengthening of Ukraine’s cooperation with NATO.

The events of recent months, and especially January-early February of this year, suggest that Poland is no longer an ally, as a neighbor of Ukraine. But this is far from the truth, at least not yet. Scandalous statements of the Polish authorities regarding the historical questions are intended primarily for domestic consumption.

Warsaw, and Kiev is not interested in worsening relations between the two countries. As soon as the tension in Ukrainian-Polish relations became to be too much, Poland pulled back and smoothed the corners. Witness the statement of the Minister of foreign Affairs Witold Waszczykowski of 9 February, in which he stressed that Warsaw is continuing to support Ukraine and oppose Russian aggression. “Poland doesn’t want our bilateral relations have become hostage of the past”, — said the Minister.

Most likely, the historical contradictions will continue to manipulate both sides of the Polish-Ukrainian border, although be careful. However, it will not change the strategic course of Warsaw, which does not reflect a serious confrontation with Kiev.

Canada and the “fragmented” States

Canada has consistently supported Ukraine and condemned Russian intervention, while trying to “keep a distance”. Ottawa no problem holding anti-Russian sanctions. In December last year, they even expanded, albeit symbolically. Canada provides Ukraine with significant financial assistance. For example, in 2017, Kiev will receive more than $8 million just for the development of the National police.

The United States since Donald trump is unlikely to get actively involved in resolving the Ukrainian crisis. But it is also unlikely that Washington will hand over the interests of Kiev and renounced the role of his ally. The American establishment is divided, from the administration to trump sound contradictory signals. But while in the States the political camp of allies of Ukraine stronger than the camp of supporters of the “radical” normalization of relations with Russia.

In addition, there are a number of countries that support Ukraine, however, take a more passive stance.