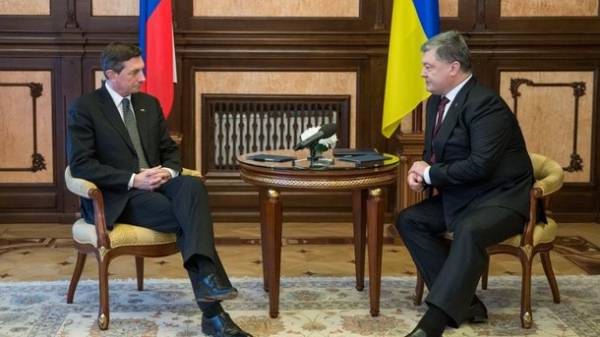 President of Ukraine Petro Poroshenko had a meeting with the President of the Republic of Slovenia Borut Pahor, who visited Ukraine in the framework of its international tour, after visits to Berlin and Moscow. About it reports a press-service of the head of state.

“Thank you for a strong and robust stance on supporting the sovereignty, territorial integrity and independence of Ukraine, for a firm position in ensuring the European unity, including sanctions, and for clear position on the illegal annexation of the Crimea”, – said Poroshenko.

President Poroshenko in detail informed the interlocutor about the latest aggravation of the situation in the Donbass in connection with the shelling of Avdiivka by the Russian-terrorist forces.

It was noted that to achieve progress in the negotiation process on a political settlement must be made the priority items of the Minsk agreements in terms of safety, above all, a full and final cease-fire and withdrawal of heavy weapons.

President Poroshenko stressed the importance of maintaining a consistent sanctions policy of the EU towards Russia until full recovery of unlawfully violated the sovereignty and territorial integrity of Ukraine within internationally recognized borders, including Crimea.

They also discussed the issue of European integration of Ukraine. The head of state thanked for the active support of Slovenia on the issue of early introduction of the EU visa-free regime for Ukrainian citizens.

The parties noted mutual interest in developing cooperation in the field of energy efficiency and agreed to intensify work to restore direct air service between Ljubljana and Kiev. The Ukrainian President confirmed Ukraine’s interest in strengthening cooperation with Slovenia in the economic, cultural and humanitarian spheres.

President Pahor informed the Ukrainian side about the results of his negotiations in Moscow and Berlin.

The President of Ukraine Petro Poroshenko has renewed the invitation to the President of the Republic of Slovenia Borut Pahor to visit Ukraine with official visit.

We will remind, in November of 2016 Poroshenko’s first official visit to the Republic of Slovenia.