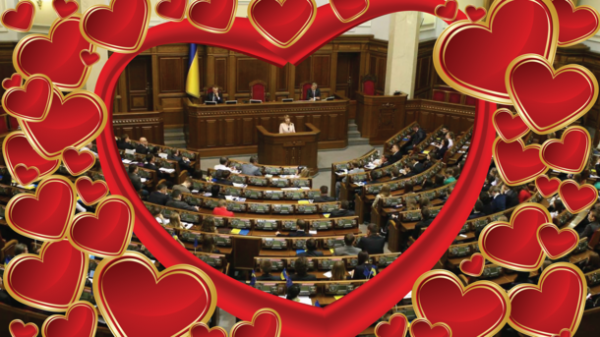 Nothing human is alien to Ukrainian officials – including love. Subtle drama and simmering passion on the verge of hate – all this is enough in Ukrainian politics. Valentine’s Day website “Today” has collected a pair, with the relations which are observed in recent whole country. Lutsenko wrote the fugitive “guarantee” letter and read out loud, but he refused to listen

Could anticipate ex-President Viktor Yanukovych, signing in April of 2013, the year the order to pardon Yury Lutsenko, 28 November 2016, all the same Lutsenko, but already in the status of the attorney General, declare him of suspicion? Listen to how much he was wanted in Ukraine, the fugitive refused and out of the courtroom on a break out. However, Lutsenko claims: an official letter reached the addressee.

In Kiev the former President was expected in December, however, Yanukovych admitted – afraid to go home. Instead of ex-official of the GPU arrived his lawyer with an invitation to the investigators to visit Rostov-on-don for carrying out of interrogation and back read by the Prosecutor General suspicion. In response to that, Lutsenko said that the evidence in multiple criminal cases against Yanukovych’s enough and tried to leave the ex-President without a livelihood, which, according to the accused party, he doesn’t.

As of today, the Russian Federation still continues to conceal the whereabouts of the fugitive Ukrainian “guarantor”, and 20 officials of times Yanukovych has made a deal with the investigation. The GPU is occupied 15 volumes of the case and the disposition of the property – there is a court decision for the vehicle, alcohol, real estate and ship restaurant, is now eyeing to “Mezhyhirya”. And in March begins the trial of treason and the development of relations, President Yanukovych will be visible on all screens of the country. 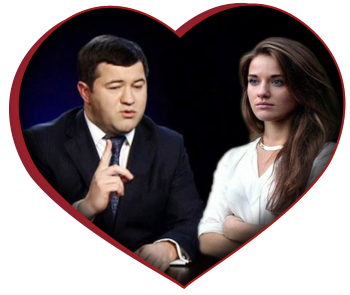 While he was presented with a ticket to the inauguration of the trump for 250 thousand dollars, it is accountable for 500 UAH prize

The paradox of this relationship is that the head of the State fiscal service Roman Nasirov chose Marushevska among the nine candidates for the position of head of the Odessa customs. But something went wrong and six months later the young chief complained to the President in which it “displaces new people”, in General, and the State fiscal service in particular. In response Nasirov announced Marushevskaya reprimanded for the purchase of software, which was not – and war broke out.

A Palestinian accused Nasirov in the appointment of corrupt officials and “parachutists” on the posts in the Odessa customs and filed for him in court. After the departure of Saakashvili as head of the region, wanted to resign, but the head of the SFS took her statement immediately. Nasirov simply refused to dismiss the head of the Odessa customs with the consent of the parties and dismissed “in connection with disciplinary violations.” Then the Safe fell under investigation on suspicion of corruption, and then to NACP for 500 UAH award for the 8th of March. 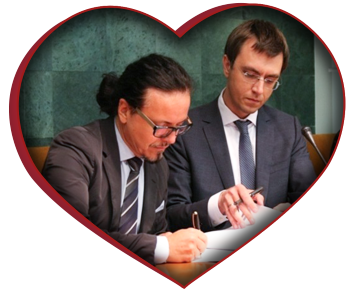 Polish rocker gave to the Ukrainian Minister of their CDs, but not for long music played

“I don’t want to say that he is a genius, but he’s close to it”, – so responded the head of “Ukrzaliznytsya”, the Minister of infrastructure Vladimir Omelian back in may of last year. However, two months later the Minister began to complain of the reform plan may have corrupt it to run tired, and Balcon, incidentally, gets paid not only above the Ministerial, but also above market. The pole, too, was not ready for the extent of bribery in transferred to the management of the company – stated that he is not a magician to come in and immediately change things, and also with an ax in any one run is not going to. And admitted that his main achievement in 100 days of work was that he began to understand the local mentality.

Mutual claims managers coexist for about six months, but now their conflict has gone beyond the Ministry of infrastructure. 25 January a scandal erupted at a meeting of the Cabinet of Ministers. Now Omeljan says that the choice of the Ukrainian Railways voted against Balcone – and this was one against all, and now his misgivings are justified. “We received a capricious showman, not a shark Il RKR cargo”, – concluded the Minister of infrastructure. 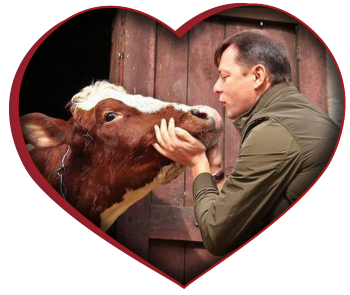 For Lyashko cows broke through the cordon “Berkut”, and he cleaned the asphalt from the pellets

Officially for the first time in the society cows are the main “radical” appeared in 2011-m to year. Red-and-white horned Ukrainian named Julia, and Oleg Lyashko gave her a large family of Kirovograd region. “As a child, I grazed cows and calves in the Luhansk region. The first entry in my workbook – the shepherd of the collective farm “Progress”, – said Lyashko. And admitted: if not politics, would the cows with calves.

After Julia Chapter “radicals” gave a cow Karina, with whom he tried in the winter of 2011 to storm the Verkhovna Rada. In the government building with the cow Lyashko not allowed “Berkut”, and then forced to remove the pellets under the threat of making adminprotokola.

Then for several years the story was forgotten – and now in the spring of 2016 Oleg Lyashko brought three cows under the Parliament (however, this time no they are not horns twisted and face into the asphalt to put tried). And at the birthday party Andrew Lozovoy, and Igor Mosiychuk Lyashko gave the cow the Carpathia, that “radical” English family of settlers. Ally Lyashko Gregory Priebe claims – cow reciprocate: from the pictures of the head of the Radical party they have and the appetite is improved, and yield is increased. 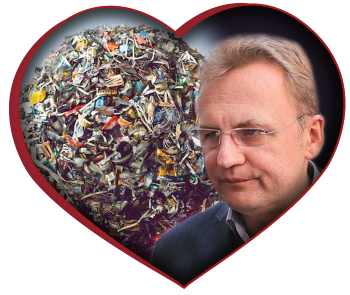 The mayor of Lviv and Lviv garbage is the ninth month, want to leave, but I can’t

Their “affair” erupted on may 29 last year and has led to tragic consequences: under the rubble has killed three rescuers and environmental engineer, city was on the verge of ecological disaster. Garbage cans and demanding the resignation of the Garden to the town hall came to the activists, but the urban head not found – went to Church. Under the personal control of the President after more than a week the dump was extinguished and the garbage Lviv began their adventures around the country.

First, it refused to accept in luck, but agreed in Kiev. However, the mayor forgot to consult with the townspeople – as a result of the Lviv garbage to the caves of the hills and did not get, was blocked at the bottom, and then the Kiev recycling plant is extremely time has been spent on repairs. Kolomyia, Lviv debris too was not, but sort of not against was Chernivtsi. They say that Lviv debris was seen in Dnipropetrovsk region, but then sort of promised to take in Nikolaev. But I was wrong – the mayor of Nikolaev decided not to irritate the public. Had to drive in Zaporozhye and the Dnieper, scattering on the road: in Khmelnytskyi, Poltava, Vinnytsia, Rivne regions. In Sumy oblast of Lviv illegal even had to detain to militiamen!

The history of these is not the easiest of relationships is still not finished. Lions for eight months in a garbage siege, at the end of January because of the garbage there was a fight in the Lviv city Council, and the mayor of Garden simply ran away from the meeting. Came Groisman, given six months to resolve the issue. Garden headache wants to get rid of and said: do not want to accept Ukrainian cities, went to Europe. 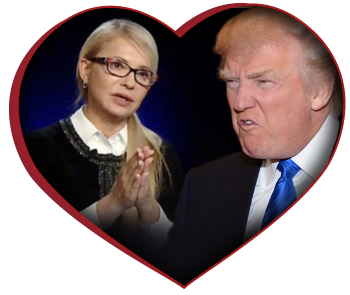 Sharing meals and secret meetings at the toilet, unintended Protocol

Classic story: she is one of the most famous blondes on the planet, he is the President of the United States of America. Their relationship began to grow into rumors before joining trump in the post – evil tongues say: say, Tymoshenko to the inauguration was not invited, had the Ukrainian policy to buy a place at the table for a million dollars. According to the Protocol Tymoshenko’s participation in the ceremony of swearing in of the new President of the United States was not provided, however, arrive at a prayer Breakfast of the Ukrainian policy protocols are not prohibited.

The main Ukrainian “radical” Oleh Lyashko, in meeting trump with his colleague refused to believe – insisted: if he has, then with another man from his past. “Max, who the old prohodimtsa could meet in America is from their old corruption “accomplice” Lazarenko to hide the stolen billions of Ukrainians on the joint offshore accounts,” wrote Lyashko in his Facebook.

As explained by the party Tymoshenko Serhiy Vlasenko, the meeting was of informal character and was “a surprise to the President of the United States” and therefore official comment from the White house will not. Of course, meeting once overgrown with rumors: they say, the initiator was herself Lady s waiting for the President… near the toilet. Tymoshenko was offended: he says, if anyone could meet the President of the United States near the toilet, there would be the whole world, and she saw him completely well in a separate room.

However, quite quickly funny story short term relationship is forgotten. Back in Ukraine after a meeting with trump, wherever it happened, Yulia Tymoshenko plunged into their old and complicated relationship with Vladimir Groisman – again tries to send him into retirement. 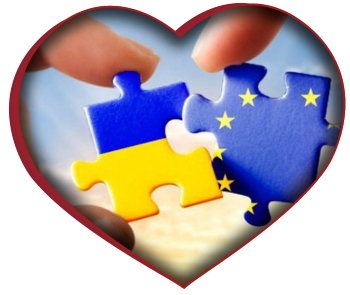