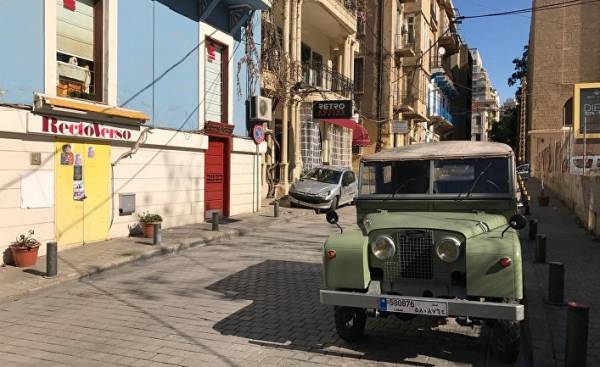 A large Lebanese delegation consisting of 50 members of the public and private sector, is on a visit to Russia with the aim of developing economic relations between the two countries. However, the main purpose of the visit is to attract Russian investments in the Lebanese economy. Whether Russia will invest in Lebanon, or this trip will end in the same way than the previous ones?

Since the official visit of the Lebanese delegation to Russia two years later. Then talked about the development of Russian-Lebanese relations by promoting trade, tourism and investment. But the sad reality is that this visit, despite the success, was not able to translate paper agreements into reality. The main reasons are associated with sanctions imposed on Russia and deterioration of the political situation and security issues of Lebanon.

The Lebanese delegation returns with a different cast, but says the same: she now declares administrative privileges for the movement of business. Launching the Lebanese delegation positive signals in the field of Russian investments in Lebanon are striking. This begs the question of what really was interested in Moscow, and which sectors of the Lebanese economy can be of interest for Russian businessmen and companies?

The answer to this question may seem self-evident. Everything revolves around two main sectors: oil and gas, and banking. But we can also mention the manufacturing sector, for example, iron – and woodworking sector. The oil and gas sector is a key Russian investment. But we must not forget that the Lebanese gas is the official competitor of Russian gas on the European market. Some people may say (and it is their right) that the interest of Russia is to lend a hand to Lebanese gas that will provide the control for European market (this is true in the case of Syria).

As for the banking sector, it is known that a regional platform for the Russian Finance is Cyprus. It is not clear whether there were any changes in the strategic direction of Moscow in this direction. So we can say that the possibility of cooperation between the Lebanese and Russian sectors is delayed, especially given the Western sanctions are affecting the most important Russian banks. At the level of manufacturing, we see that the Syrian market will be more to attract Russian companies. In particular, the reconstruction of Syria will be the basis for the choice of companies between Lebanon and Syria. It is the export of Russian iron and wood in Syria will be a great opportunity for the Russian economy. And perhaps this will be followed by the establishment of manufacturing plants in this industry in Syria.

Here we come to the conclusion that competition between Lebanon and Syria for foreign investment (regardless of origin) is obvious. A key role in this issue is the question of post-war reconstruction of Syria. Now Russia is preparing the ground for the arrival in the Syrian markets.

On the political level, we see that Russia is negatively assesses the situation with the security of Russian tourists, especially in terms of its immersion in the Syrian quagmire. Thus, the effect of a clear instruction from the Russian authorities to its citizens not to go to Lebanon, and in countries such as Cyprus and Turkey.

Here we see that the Lebanese officials have great hopes for Russian investments, despite clear justification of these hopes not.

But still, is there any ability for Russia to invest in other countries? We will try to answer this question objectively, drawing on the language of numbers.

March 2014 Russia is living under the weight of economic sanctions by the West as a result of the annexation of the Crimea Peninsula. The United States was the pioneer in this matter. USA introduced affecting the oil and gas sector sanctions, which make up half of Russian gross domestic product. This was done with the aim of weakening the economic potential of Russia and to prevent the implementation of any future military projects. The sanctions ban American oil companies to transfer technology to Russia, as well as to import gas and oil from this country. A ban on granting U.S. long-term credit banks in the Russian oil industry.

European banks followed the example of American banks in their actions. This led to the fact that Russia lost huge investments, which began to leave the country amid falling Russian ruble. The figures show that foreign direct investment in Russia dropped considerably in 2015 compared to 2014. The volume of direct foreign investments decreased from 64 billion in 2014 to $ 28 billion in 2015. It is noteworthy that the Russian economy fell by 3.7%. This only confirms the economic saying “there is no investment, no growth”.

China is having serious financial resources, did not react to any significant investment in Russia, despite of the opportunities in front of him. The reasons for this date back, according to many analysts, the fact that China is afraid of the Russian bear and its economic revival. For example, China has invested in Russia in 2013, $ 11 billion, while in Britain invested in the amount of 22 billion dollars!

In December 2016 the European Union has voted to adopt a decision on the extension of European sanctions against Russia for another six months (until 31 July 2017). The EU pre-empted thereby, by the American decision. The Europeans feared that the American President, the trump will go to the lifting of sanctions against Russia. Fear was associated with the spread of information in the media about the Russian intervention in the American elections in favor of trump. If we take into account historical data on foreign direct investment in Russia, we see that Russia needs investments in the amount of up to 27% of GDP, while today they are far from this figure.

Russia is trying to overcome these sanctions by creating new partnerships with several Asian countries headed by China, Southeast Asia, Turkey, Syria and the transition to national currencies in mutual payments in trade instead of the US dollar. Many of the countries in the region look forward to strengthening this partnership which will benefit both them and Russia. From this point of view, we can say that is the place to be a wrong reading of the Russian situation of the Lebanese delegation, which expects more than Russia can offer to Lebanon, and promises that Russia more than Lebanon can give her.