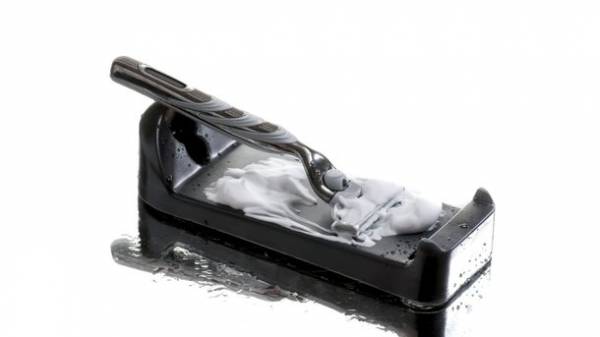 There are many sharpening devices for various instruments, but until recently, Ukraine was not such that it helps to make the blade cartridges shaving sharp again.

The invention was made in Denmark.

Morten Kjeldsen, a Danish engineer, thought about the fact that almost all men who use razor cartridges have to buy them again and again.

Using its own methodology, it is investigated why the blades become less sharp and that leads to a poor shave.

He was invited to experiment three friends who have given three of the same cartridge razor and asked to shave them for 21 days.

At the end of this period when shaving was uncomfortable and caused irritation, Morten researched used the blade and came to an unexpected conclusion – razor blades are not dull!

Comfortable shave prevented the layering of soap on the blades with particles of hair and skin, which are clearly visible under the microscope. Removing all this dirt, it became possible to make the blade sharp again!

In the next stage, carried out extensive research materials that helped to clean the blade of dirt. First examples of pieces of steel denim and leather, which was theoretically known that they can clean the blade while holding him with a razor. But subsequent tests proved that both materials do not tolerate water ingress: denim fabric leaves lint on the blades, and both start to stink after a short time.

Turning to modern materials and using all his experience, Morten Kjeldsen finally got an effective device that allows you to sharpen any blade cartridge and shave them one over 150 times.

The surface of the invention was soft, the material is durable, hypoallergenic and waterproof silicone interspersed with diamond-like microscopic abrasive particles. Swipe blades on the surface only 5-7 times, the user again receives a sharp razor for a comfortable shave!

Morten called his invention the implement used and issued on the sharpener a corresponding patent in Denmark in 2008. Since then, the world has sold more than 600,000 products worn out, which helped save a lot of funds to users.

Sharpener worn out available in Ukraine on the website www.razorpit.com.ua and on partner sites.