The Kremlin said that the new US administration favoured a settlement of the conflict in Ukraine. About it the press Secretary of the President Dmitry Peskov, answering the question, what is the US position on the conflict settlement in Ukraine after a telephone conversation of the presidents of the United States and Russia.

“The American side is a strong supporter of the view that we can not allow the Ukrainian crisis to evolve into a chronic crisis, the intensification of efforts to settle this problem”, – said Putin’s press Secretary.

At the same time, he said that the position of the Kremlin “nothing has changed” and he was in favor of the alternative of implementing Minsk-2″.

“In the first place – the implementation of the Minsk agreements by Kiev without any double or triple interpretation of these agreements. This can be the key to success. With this we witness this significant sagging that does not contribute to the solution of this problem”, – said Peskov.

Earlier the President of Ukraine Petro Poroshenko said that to address security issues in the Donbass amendments to the Constitution in terms of decentralization and any other political issues of the conflict settlement will be on the agenda.

As you know, one of the first points in the Minsk agreement is a sustainable ceasefire, but Kiev has repeatedly indicated that controlled by Russian militants carried out attacks and provoke the Ukrainian military. At the same time, Moscow insists that Kiev as soon as possible to amended the Constitution and gave the occupied part of Donbas “special status” and would agree to conduct these territories elections and recognize their results. Prior to that, the Kremlin refuses to provide access to uncontrolled parts of the border not only for the Ukrainian border, but also for observers of the OSCE.

Earlier, Putin’s press Secretary Dmitry Peskov also said that Putin and trump has not discussed the lifting of sanctions. 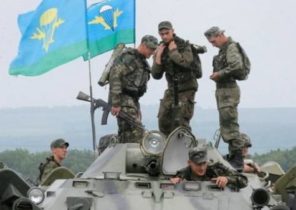