Michel Temer intends to present Donald Trump, the list of proposals for cooperation. A priority among these is the protracted 15-year agreement that would allow American companies to use for launching satellites military base of alcântara in the state of maranhão.

Promising great benefits of partnership in this area would help to generate the resources necessary for the revival of the infamous Brazilian space program. In addition, would give Brazil the opportunity to occupy a niche in the new Republic configuration of Washington.

Negotiations on the original version of the Treaty was led by Fernando Henrique Cardoso in 2001. Then this proposal was not given of course the opposition MPs, headed by the PT (Party of workers). The Temer, given the parliamentary majority, there is every chance to push a new version of the document.

In any case, the negotiation of the agreement with trump will be the subject of hot debate in the media and social networks. As it has happened many times, the opposition parties will expose the agreement, calling it “treason” and “treason”.

This argument, of course, is positive: honest disagreement supported by evidence, are an important component of the foreign policy of any democratic state. Moreover, it could contribute to even more favorable agreement.

However, public opinion here should be on guard, because not many of the themes of the Brazilian diplomatic agenda are subject to greater number of false interpretations and slander than it is the agreement on technological safeguards. The era of the “posttrade”, in the end, is not an exclusively American phenomenon.

Parade rage against Alcantara has already begun. On Saturday (January 21) for this topic came from the magazine Carta Capital. The publication claims that Brazil has been negotiating “secretly”, that is not true. It also ascribes the initiative of josé Serra — another lie (to return to this question suggested that Dilma a few months before the impeachment).

The authors don’t stop there. They claim that, according to the text of the initial agreement, negotiations for which led to Cardoso of Brazil do not start from a military base of its own missiles — again a lie. The magazine warns that the agreement interferes with Brazil to cooperate with third countries and to allocate funds for the development of the Brazilian satellites from two wrong statements. In case of cancellation of the contract, the Brazilian technicians would be denied access to basic equipment — another lie. Readers can read the text of the original agreements on the Internet.

When it comes to foreign policy, deception enters society astray, spreading ignorance and giving the course about the interests of surviving due to the “spokesmen”, who are paid from the taxpayers.

Now, when Brazil is preparing its first talks with trump, he betrays the Motherland, who in such a sensitive debate deliberately distorts the truth. 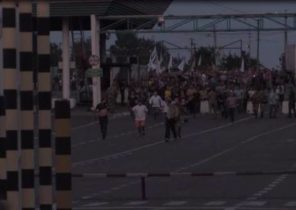