Today the Orthodox celebrate great Christian holiday — Epiphany. It is believed that on 19 January Jesus Christ was baptized in the Jordan river. People believe that on this day the water has healing properties, and many to achieve the maximum therapeutic effect by bathing in the ice hole. But experts warn that jumping into the water without observing certain rules can greatly harm your health, leading even to fatal consequences. How to avoid these troubles, we found a family doctor Alexey Maximenko. And the priest, cleric of St Vladimir’s Cathedral of Kiev Alexander Sharygin said that you want this brought the ritual spiritual cleansing.

PRIORITIES. Dipping in the ice-hole on Epiphany is not a Church sacrament, but simply a tradition. “In fact, it has no direct relationship to the holiday, the Church does not force believers to climb into the icy water. The most important thing you need to know — Epiphany bathing cleanses from sin, as many think, — says Alexander Sharygin. — Spiritual cleansing only occurs when we repent of our sins during confession”. Fact: a large number of people now do not think about the essence of the holiday, and dipped into the hole just due to the fact that it is considered fashionable tradition.

“It is important that the observance of the custom is not clouded the true meaning of the holiday — the Baptism of the Lord Jesus Christ. During the baptism in the Jordan, as narrated by the gospel, God has revealed to man. Therefore, it is completely irresponsible to jump into the hole unprepared, “company” or even drunk. It is very dangerous to health and life, but also unacceptable from the point of view of religion. It is a sin because a person shows disrespect to prayer and the grace of God, which the believers ask the Lord during the consecration of the water,” says Alexander Sharygin.

The main thing for a Christian in this day, according to the priest, is to attend a Church service, the divine Liturgy, the sacrament of confession and Holy Communion, to pray and drink Holy water. It all leads one to light and life with God. And after that, if health allows, you can plunge into the hole. But this should definitely be prepared.

WHO CAN NOT. When a man plunges into an ice hole, his body begins rapidly to “give” heat production increases as much as 10 times!

“The first cold blow of taking on the capillaries of the skin. They are considerably narrow, which increases blood flow to vital organs, particularly the heart, — says Alexey Maximenko. — Thus, for a short period of time is a big burden on the heart, and reflex constricts blood vessels of the heart muscle. This can lead to very unpleasant and sometimes fatal consequences. For example, if increased blood pressure or heart disease, then a sharp drop in temperature can lead to heart rhythm disturbances, myocardial infarction, stroke and even sudden cardiac arrest. If the violation of cerebral circulation, freezing water can cause loss of consciousness. More distant negative effects of winter swimming can be an inflammatory disease of the respiratory tract and the urogenital system”.

So, women can become inflamed ovaries and appendages, and in men — prostate. Especially careful you have to be people who have various chronic diseases, infectious diseases, inflammation of kidneys, epilepsy, hypertension and other ailments.

“Definitely do not go in the hole, year-round if you are being treated for sinusitis. Otherwise a very high probability that instead of the expected healing comes a sharp escalation — suggests Alexey Maximenko. Many people after Epiphany bathing often begin to ache, because the body reserves are depleted”. In General, if you have any chronicle, then dip into the cold water for healing is not: it is possible to obtain the opposite effect and exacerbate the problem.

If health is no problem, you can take a plunge. That’s just to count on the global health effect is also not worth it: it comes only with regular and proper winter swimming.

“It is due to the fact that the adrenal glands respond to cold shock by increasing the production of corticosteroids. They have a strong anti-inflammatory action. In addition, these “walrus” harden the body and train all of its systems, ranging from cardiovascular and respiratory and ending the immune and endocrine”, — says Alexey Maximenko.

THE RULES OF IMMERSION

If you still decided to perform the rite of dipping in an ice hole, remember important rules.

1. Not marievale on an empty stomach. When a person is hungry, he drops the sugar level in the blood. In turn, any stress, particularly immersion in icy water can cause an even greater fall of sugar level, causing dizziness, even loss of consciousness. It is not necessary to dive immediately after a hearty Breakfast — after all, digestion, blood rushes to the digestive organs and, consequently, redistributed blood volume of organs. Be sure to exclude from the diet fatty foods — they are digested hardest. Ideally, if after a meal it will take at least 2-3 hours: it is time for the food to digest and there is no imbalance in thermoregulation.

2. Mandatory completely eliminate alcohol! Many people drink before the dive “for courage”, but it is strictly prohibited. First, any alcoholic beverages violate the body’s thermoregulation. Second, the alcohol dilates blood vessels — while cold water constricts them. As a result, the load on the heart increases by many times. In addition, in such a situation, the person should be sober to control the situation.

3. In order to avoid emergencies jump only in specially equipped places. In any case, do not perform the rite alone, independently making a hole in the ice on the river or any other water body.

4. Once undressed, do not throw immediately into the icy water. Wait 20-30 seconds to the body a little cold air and was “prepared” to cold exposure. Do not jump with a running start into the water — go slowly. In any case, do not dive head-first so you can get a shock from cold, and lose consciousness. To plunge can be, but this should be done very quickly.

5. In the hole preferably is not more than 5-10 seconds (can be hardened up to 1 minute), otherwise you risk to get hypothermia.

6. Coming ashore, RUB a good towel. Better to have two: one removes the water, and the second remaining moisture. After you get dressed in the dry and drink hot sweet tea (bring a thermos). 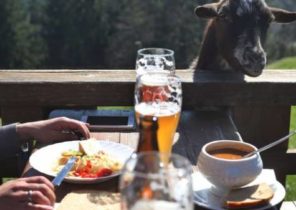