Famous purchasing rush, coming from the East, seems to have ceased almost before it began. Despite the fact that the number of Russian shopping tourists again rose slightly, boutiques and bars in the Finnish Dies are closed. Russian is still too small.

“Of course, it is possible to jump back excited headlines about buying the fever Russian, but actually it is not so. I became twice Russian buyers, Yes: there was one, became two” — ironically Koverola Anu (Anu Koverola) in his shop kitchen supply premium Kokkikauppa — Culinaria al Dente.

The shelves are half — empty. She closes her boutique after just one and a half years in the bright shopping center Iso-Kristiina in Dies. Now she is selling the latest De Buyer pans, Riedel wine glasses, peramaki Peugeot and sets Villeroy & Boch. On the last day of January all will be over. Russian tourists have become a little greater when the value of the ruble to the Euro for the year increased by a quarter.

The Consulate in St. Petersburg issued 30 thousand visas in December, which is 15-20% more than a year ago. But the numbers still remain modest.

Gallery related to famous largest hotel Lappee, reopened less than two years ago. Shopping street, lying under his roof, is another source of pain for large networks of stores, without suffering buyers almost in the center. All of them were built to serve a wave of Russian tourists, which, however, suddenly almost completely dried up when he fell, the ruble.

— We counted on Russian buyers, when we opened our boutique in spring 2015. One Russian buyer could buy the glass for the amount that was consistent with my usual weekly revenue, says Koirala.

Now Russian shopping tourists do not like the wealthy representatives of the upper middle class, which in excess has arrived in good years.

— Those who now come here, you see in stores such as Prisma and Lidl, not more expensive. And when lost Russian clients with money together with them in the city disappear and the good restaurants and shops. Along with this, in turn, decreases the purchasing power of the local, says Anu of Koverola about in any situation were her business.

In the centre of Lappeenranta is no shortage of empty spaces for shops and bars. Think and here, the government seized the cafes of a network “S-Group”, as in many other small towns.

Also silent and dead in the other boutique of the same picture under the name of Iittalas. But the owner of the boutique and Lucca Tarja (Tarja Liukka) and a Russian-speaking clerk Kamarainen Olga (Olga Kämäräinen) happy.

— We had a good week after the new year. Russian buyers are clearly more than a year ago, so we hope for the best. They are so important to us.
Classic Scandinavian design Iittalas never goes out of fashion and is very popular among tourists from St. Petersburg.

— They buy beautiful crockery for every day, as well as pots and pans of good quality. Ceramic with bright ornaments, too they like. Our classic Finnish glass artists the world-famous and very known in Russia.

In the boutique Iittalas know very well Balduk Galina and her husband who regularly come in here. They come a couple times a year and buy, for example, dear birds of glass written by Oiwy, Toichi (Oiva Toikka).

— We collect the glass and we have a really big collection at home, says Ms. Bolduc.

Steam is not limited to the vicinity of Lappeenranta. This time they went in Vierumäki, but often in their repertoire and Helsinki.

Pair Bolduc refers to the faithful Russian clients of the boutique, which keep in contact with him via email to book your favorite items.

— We have always had at least one Russian-speaking salesman. You can of course work in English, but quite another thing when serving customers in their own language. Russian customers demand good service. They are not used themselves to pack purchases

Without the Russians we wouldn’t have the kind of Disas Fish shops that sells all these seaside treats, or stores, sells clothes expensive brands.
Disas Fish is a popular food market in Mustola just outside of town, which is often the last point where the Russians pick on the way home.

Fish and seafood occupy a Central place, but also buyers offer to purchase a home, for example, the meat is vacuum Packed and other products. The fish counter is relatively short.

Is slightly cheaper than at home, and the quality is better, says mother Irina.

One look at the shopping trolleys and it becomes clear that most of them are mass products, and delicacies like foie Gras and lobster remain on the shelves and in refrigerated cabinets. The product turnover is also modest compared to what we saw a few years ago.

About Prisma large market in the centre we find the only bus with Russian tourists. When the invasion from the East was in full swing in the Parking lot could stand up to 40 buses. And Russian machines for the most part now a small and unassuming compared to those SUVs that are infinitely came a few years ago.

— Most buy everyday goods in large quantities, and often for relatives and friends, — says one of the employees.

A strong belief in the Russian market has prompted entrepreneurs to build great shopping facilities here, about two miles from the border crossing at Nuijamaa municipality. Businessmen had hoped that with the introduction of sanctions, the shopping tourism from Russia will amplify, but this did not happen. Weak ruble outweighed.

Today, these commercial facilities, to the uninitiated, seem to be a symbol of the wrong investments.

But South Karelia entrepreneurs will not so easily give up. They are waiting in the wings, deeply convinced that sooner or later there will come a lifting. It turns out that the three largest pieces on the market border trade, Disas Fish, Department stores, low prices Rajamarket and Department stores Laplandiamarket plan to expand their area by thousands of square meters, as soon as they allow it to amend the city plan.

Their optimism is also supported by the fact that IKEA decided to buy land at the intersection of Highway No. 6 and highway Nayamashi. But the furniture giant is in no hurry to build.

Orchidé Grande is a luxury Department store, which for many years avoided all misfortune and whose orchids on the façade sparkle in the night so bright, like a beacon.

The previous owner Mohammad Darwish (Mohammad Darwich), which owns and Laplandiamarket, gave up a year ago and the business moved to the Italian Salvatore Coletta (Coletta Salvatore).

In the Parking lot another car. We have quite a long wander among the suits Armani and Cerruti, and don’t bother us neither buyers nor sellers.

But in the local newspaper Etelä-Saimaa Colette, at least, says he believes in the return of Russian consumers of luxury goods, even if that takes another year.

— I trust that they will come, otherwise I wouldn’t be here, ‘ he says.

The same belief in the future of a strong and a couple of entrepreneurs from Victoria and Denis Emelyanov, who left St. Petersburg for the rest of Eastern Finland. Steam sells special knives, spare parts of motorcycles and electric heaters.

— I don’t want to play roulette Russian economy. We never know what to expect tomorrow. Your house is in a quiet luumäki fits me perfectly, — says Denis.

— Best chef of Finland come here to buy our knives, says Victoria, ‘ and now we are opening a shop in Helsinki.

— But we ourselves will stay here. In Helsinki too crowded, says Denis.

To record years is still far

The Consulate General of Finland in Saint-Petersburg took 30 thousand visa applications in December, says a 20 percent increase compared to the previous year. This figure, however, is very modest, if you recall 2010-2013.

In record years, the Consulate took more than a million applications each year. For example, in 2013, before the flow of tourists from the East has ceased, 1.2 million Russians have applied for a visa to Finland. 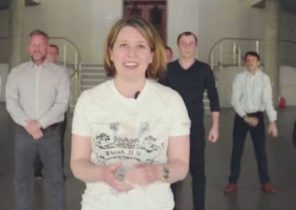