Rains will be smaller, especially relieved the inhabitants of the Western regions

Today’s temperature swing from +16 to +34 with the beginning of next week will be replaced by cold, in some areas the temperature will drop by about 10 degrees. When it finally rains leave the Western region, which already suffered from flooding.

So, on Monday, July 13, from the West country rains and thunderstorms will move East, throw at and in Central, Northern and southern regions. Dramatically cooler in the center and in the southern part of the country after today’s 30 to 34 degrees tomorrow will be a comfortable 20-22 heat. Nights on the West and North will be quite cool – only 11 degrees. In Kiev, 20-22 degrees and rain. 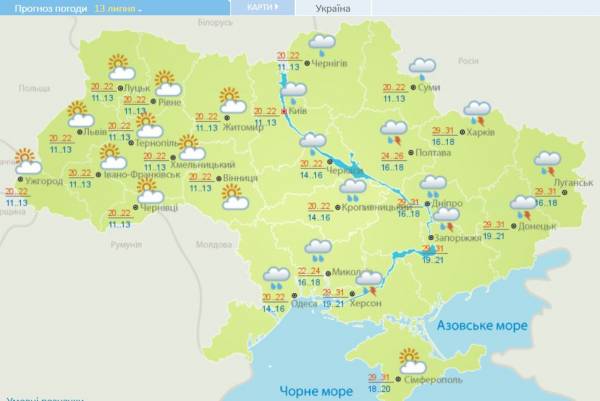 Tuesday, July 14, rains will be less thunderstorms are expected only in the East, the North, will also affect the Poltava and Dnipropetrovsk region. The rest of the territory of Ukraine Sunny, but temperatures will remain pleasantly cool. 20-22 degrees, in Eastern regions and in the South the maximum of +26. The cool of the night in 11 degree spread to more areas, except the South and East. In Kiev the same comfortable 20-22 degrees and light rain.