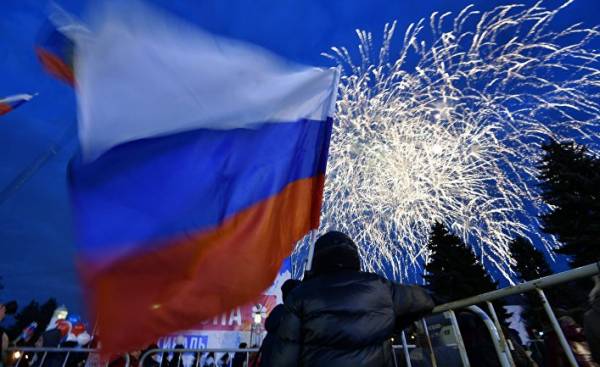 Moscow marks the anniversary of the annexation of Crimea to Russia. On March 18, three years have passed since then, as President Vladimir Putin has signed the decree about joining of the Crimea and Sevastopol a part of Russia.

This event one moment changed the established post-cold war order in Europe, provoked the introduction of mutual sanctions between Russia and the West and led to the war in the East of Ukraine. In Moscow forced the accession at once began to celebrate on the red square, and the last two consecutive years, the anniversary was celebrated there.

This year the celebration was shifted away from the center of Moscow, to the building of Moscow state University. According to independent TV channel “Rain”, it made one exception: Putin was not involved in the festival was not even shown a recording of his greetings.

Although the organizers of the event tried to explain the reasons for the transfer of the place of celebration, speculation began in Russia. At the same time, analysts talk about a more global question: what Crimea means for Russia?

Within three years, the independent Russian media was trying to figure out whether the changed situation in the Crimea in the worst or for the better. The missing arguments for the positive and negative reviews. For example, the local authorities more money now than in the days of Ukraine, but it is primarily associated with the transfer of funding from other regions of Russia, and not the economic development of the region.

The facts in the discussions about the Crimean question is of no importance in Russia have not. The most important thing — feelings, talk about “returning home” and “the heart overflowing pride.”

These same feelings raised the rating of Putin three years ago to incredible heights. Even then, the scientists argued, will last if the President’s popularity at this level until the presidential elections in 2018. It seems that the President’s administration came to the conclusion that before the election we need something new and the celebration of the anniversary of the annexation of the Crimea could push.

Upstaged and the decision of the Crimean question. Crimea is gradually included in the list of unsolved situations, where there are still Abkhazia, South Ossetia and Transnistria.

The situation in Eastern Ukraine also seems to have become an unresolved conflict, as Russia has started to recognize the passports of separatists. Ukraine is still struggling to budge, and on March 16, has decided to cease transportation to the Crimea.

Conflicts ignore intentionally. In this case, it will be easier to cooperate with, for example, the United States, and to think of tactics for the future. Close elections.