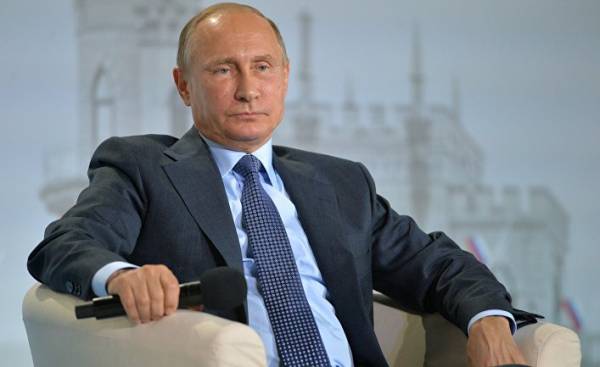 Since the seizure of Crimea by Russia in early 2014, many began to consider Vladimir Putin a kind of geopolitical genius. The international media often portrays it like a supervillain with the habits of James bond, who is always one step ahead of the hapless Western opponents; deciding the fate of the world from the depths of his Kremlin lair. Putin must be so flattered by such hyperbole, the sign of the rebirth of Russia and his own place in history. But if he’s honest with himself, should notice: the price of the Crimean conquest is growing. Accordingly, it is time to regret the fateful order to invade the Peninsula.

At first it may seem that Putin’s success over the past three years justifies this move. He is credited with not only invasion of mainland Ukraine, but also taking control of the Syrian conflict, undermining the European Union, as well as the introduction of Donald trump at the White house. These bold gambits made Putin the most discussed person in the world policy and Russia has returned to the top of the global agenda. The only question is whether it worked in the hands of Russia?

From an economic point of view, definitely not. The Russian economy is once prityagivaya international investment as a magnet and which was the true reason for Putin’s popularity in the country, suffered greatly from the external of the President’s adventures. The Russians today are much poorer than three years ago. Thus they have to watch as more limited public resources are spent not on basic social needs, and the army.

The labors of Putin foreign policy do change geopolitical discourse, but the big gains that Russia has not received. The attack on Ukraine awakened the old foe of the Kremlin, NATO. After a quarter of a century to find myself living in post-war world (since the end of the cold war — approx. ed.) is a military Alliance finally had a new life. Increased military presence of NATO near the borders of Russia, individual member countries are increasing their military potential.

Putin’s imperialism played the role of a recruiter NATO. The entry of Montenegro into the Alliance demonstrates a major strategic shift in the region, which was once considered a Russian sphere of influence. Even such traditionally neutral countries like Sweden and Finland are actively debating about the benefits of NATO membership. If the invasion of the Crimea was conceived as an attempt to thwart the Alliance, in fact it worked the opposite way.

The revanchist foreign policy of the Russian leader had a detrimental effect, and in all directions. The Kremlin cyberwarfare and hacker attack on the EU has led to the fact that politicians, willingly agreed to the status quo, in the end were forced to recognize the growing threat from Russia. Putin is also credited with participation in the buildup of a referendum on withdrawal of Britain from the EU. The case ended successfully, but the desired results to no avail. London shows no signs of easing position on sanctions against Russia. On the contrary, the British leaders have made every effort to demonstrate their support to Ukraine and resolve to Russia.

The victory of Donald trump in US elections also ended in disappointment. Russia’s role in the triumph of the tramp is still the subject of considerable debate, but the Kremlin clearly did not hide their jubilation on this occasion. However, this enthusiasm is, apparently, irrelevant. Trump already got rid of one of his advisers because of his ties with Russia. Moreover, the American President seems distanciruemsa from talking about the “big deal” with Putin, actively pulls them earlier. Not surprisingly, the Kremlin’s TV channels abruptly stopped praising trump.

The seizure of Crimea has spread panic throughout the post-Soviet region, destroying the dream of Putin’s Eurasian Union. Instead inspired by the idea of closer Union with Russia, former Soviet republics nervously looking for a way to distance themselves from the Kremlin. Sparring with a pliable earlier Belarus has shown so far.

But the biggest setback for Putin in Ukraine. Russian hybrid war was to destroy the Ukrainian state, but instead have consolidated Ukrainian national identity, so much so that until 2014 like myself no one could imagine. The country has built a formidable defense against further Imperial adventures of Putin. Loss of influence over Ukraine is, without exaggeration, a historic blow to the interests of Russia for a long time she will be given an echo.

All of this could have been avoided. If Putin had not invaded Crimea, relations with the post-Maidan Ukraine is gradually stabilized. The Kremlin would be drawn into the downward spiral of the hybrid war, which brought Russia new enemies and of little use. Russia still would be a member of the Big eight and a desirable partner at the highest international arena.

What is the third anniversary of the Crimean crimes Putin will see before my eyes only geopolitical confrontation created by himself.

Peter Dickinson, the magazine publisher of Business Ukraine and Lviv Today editor of the Odessa Review.