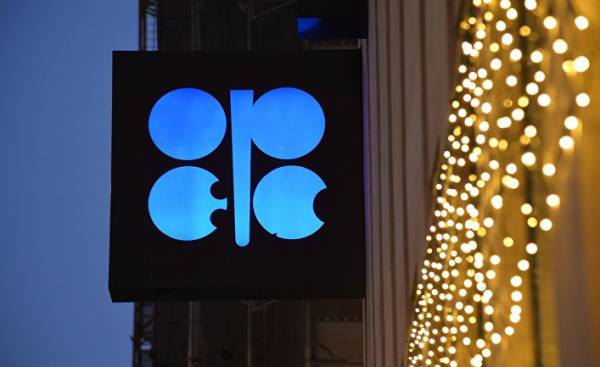 At first glance, the new plan is no different from the previous strategy of OPEC reducing production. When this cartel and its allies will meet on Saturday, June 6, they will have to agree on the extension of the period of production cuts for another month, i.e. until the end of July, in an attempt to achieve price increases.

But if you look closely, you can see subtle changes that indicate that Saudi Arabia, Russia and their allies at the OPEC+ make a choice in favor of a more sophisticated approach: they are trying to turn the curve on oil prices upside down. In many ways, the cartel borrows the script from the leading Central banks of the world, whose leadership often focuses on the relationship between long-term and short-term interest rates.

The Alliance, which includes 23 oil-producing countries, traditionally focused on the reduction of oil reserves. Now he began to pay attention not only on the volume of reserves, but also on the shape of the curve of oil prices, developing a course that will influence prices in the short run relative prices in the longer term.

The idea of OPEC+ is to make spot prices higher than the prices of forward contracts traders call this tactic a backwardation, as explained by one of the delegates. In other words, OPEC wants the oil for immediate delivery was used more in high demand compared to supply of oil a few months or years, because it will force refiners and traders to get oil from the stock.

“This marked a departure from previous goals that involved inventory reduction,” — said the brokerage company Eagle Commodities Brokers in your message to the customers.

This change of strategy, which was first reported by Bloomberg on Friday, June 5, may have a significant impact on us shale producers, izvilkumi profit from higher prices on long-term contracts they use for hedging their future production. Although the price of West Texas Intermediate crude for delivery in the next month rests at just below $ 40 per barrel, the oil of this brand for delivery in 2021 is trading at a higher price. The price of oil WTI with delivery in 2022 is 42,50 per barrel.

To control the shape of this curve is difficult, and it will require OPEC+ constantly to make adjustments in production volumes quickly in response to changes in supply and demand. However, it is already noticeable signs that OPEC+ selects a more flexible exchange rate, extending the period of cuts in production for only one month instead agreed reductions for a longer period.

“We expect that this strategy will help to limit price increases to the end of the year and oil prices with a long delivery that will help to achieve the state of backwardation,” said Goldman Sachs analyst Group Courvalin Damien (Damien Courvalin) in the message to the customers.

For the Alliance OPEC+ ideal would be this scenario, in which the shape of the price curve will change with the current contango, when the price of oil for immediate delivery below oil prices for delivery in the future at a modest backwardation, when spot prices are slightly higher forward prices. For the cartel’s preferred option will be easy backwardly — about 20-30 cents for each barrel in a month. Now WTI is in mild contango — about 15-20 cents per barrel per month.

“We believe that OPEC continues to focus on sustainable increase in income due to a combination of higher prices and higher market share, — said Courvalin from Goldman Sachs. — This confirms our view that OPEC will seek to backwardly, not only to high price.”