In the past few months, coronavirus, may have drawn all the attention, but did not eliminate some sharp geopolitical issues. Moreover, when the pandemic starts to decline, their relevance will only increase. Of course, we are talking about the situation in the middle East, primarily in Syria but also in other areas (again increasing tensions in the Persian Gulf; the conflict in Libya is becoming more unpredictable; the Israel of rushing to Annex another part of the West Bank…).

What is happening in Syria? On the ground nothing really significant, but in the political sphere, brewing crises, and one of them is in relations between Damascus and Moscow.

It’s been almost ten years since then, Syria war broke out. Almost from the outset, Russia defended Damascus. At first by political means (and probably supply), and then direct military intervention with the consent of the Syrian authorities. The Russian armed forces turned the tide of the war at the most critical moment, defeated the “Islamic state” (banned in Russia organization — approx. ed.) and helped to restore the Syrian army, which liberated almost the entire territory of the state. To complete the liberation prevented Turkey, with which Russia had to “compete” at the diplomatic level at least to stabilize the situation in the North-Western province of Idlib. Erdogan did not want to make concessions, and Russia did not want to aggravate the situation so that fighting broke out (although between Turkish and Syrian troops, they are already underway).

Therefore, the situation in Idlib can be considered “frozen conflict”, and, quite possibly, Russia is and will leave (the experience of Donbass?). As for Damascus, for him this is unacceptable. And this is the first major divergence between the allies. Syrian President Bashar al-Assad, perhaps the impression of a policy of soft and contrite, but as he has already proved, from their principles and plans he’s not backing down. His position is clear literally from the first day Assad is going to win the war and to fully liberate the country.

Russia is a little satisfied. The tenacity of Assad, insisting on full victory, is a problem for the Russians for several reasons. First, if they will go to meet him, very angry Turkey, and Turkey still is Russia’s extraordinary interest in terms of geopolitical redistribution of power. Second, Russia has sufficiently funded the liberation of Syria, and now, instead of the next military operations, Russians would like to “dividends” for their participation.

For a start Russia wants Damascus completely shifted from the war on civil issues and began rebuilding the conflict in the country. Of course, Russia is waiting, by the way by law, that restoration will be a place for her. That is, the Russians want the post-war Syria has become a country to which they can rely in the political, geopolitical, economic and military-strategic terms. As for the recovery, Russia can play a significant but not crucial role. Russia itself understands that such a lot of money it does not. But the rich oil monarchies of the Persian Gulf they are, but to bring them to Syria is not so easy (although the UAE has renewed relations with Damascus, expressing its readiness). Anyway, but of course, Russia is interested in the restored loyal Syria.

Recently I already wrote about this in connection with Winston Churchill during the Second world war and I repeat: the military leader is not so easy to bring to the way civil head. Perhaps Bashar al-Assad was faced with a war, when it was still “green” in terms of leadership, but today, after ten years, he learned a lot and, first and foremost, to protect the country and how to fight. Over the years, Assad has become “expert” in this matter and would prefer to finish the job before you start rebuilding the country, not allowing “al-Qaeda” (banned in Russia organization — approx.ed.) prepare in Idlib to “second wave”.

His position is reasonable. Understand it in Moscow. And yet in this case, Moscow is pursuing primarily their own interests, and in the near future Russia will be in the first place. The virus has claimed there is not a lot of lives, but the economic effects of a pandemic can be for Russia, a very serious (prolonged period of low oil prices Russia has always been hard).

It is clear that in such a situation, a growing tension, and she felt now in the relations between Moscow and Damascus. Is there something else new. Russia understands that she is not the one who claims to be post-war Syria. There is still Iran, cooperating with the Lebanese “Hezbollah”, which may soon become the main factor of influence, displacing Moscow. The Russians have reason for concern because of the Iranians in any case should not be underestimated. They managed to undermine even the American influence in Iraq, and to act in Syria, they will be much easier.

All these disagreements between Moscow and Damascus, mostly lurking, since to make such in public is not accepted, and the publicity could harm the Russian image. But when the story gradually becomes clear, this suggests that the crisis becomes comprehensive, and that is what we have seen in recent days.

Last month, former Russian Ambassador to Syria Alexander Aksenenok, who now heads the influential Advisory Council of the Federation Council Committee on international Affairs (connected with the Russian Ministry of foreign Affairs), published an article in which, inter alia, States: “During the war formed “centers of influence” and the shadow institutions are not interested in transition to peaceful development, although in Syrian society, in the circles of businessmen from the sectors of the real economy and among parts of the state apparatus there is a request for reforms. But in the atmosphere of General fear and the dominance of the security services, he does not sound open”.

Very Frank and unexpected statement in Moscow. Yes, Aksenenok not a member of the government, but his position is not at odds with the Kremlin. Criticism of Syria is reminiscent of the tone of materials published by some Western media opposed to Assad. Of course, this does not mean that in Syria there is “a General atmosphere of fear.” It has always been. But it is absurd that this says it is Russia that deliberately saved the regime so that it is not replaced even worse — one that could turn Syria into a training ground for anti-Russian action within the Russian state. Of course, I mean the Caucasus, which Russia “was obliged to intervene”.

Nevertheless, the article former Ambassador attracted a lot of attention. As for his words about “shadow structures”, it implies a cowardly military beneficiaries who gain power in modern Syria, and is a traditional tragic consequences of any war (we should know!).

The response from Damascus is not have to wait long. Prominent Syrian politician Khaled al-Aboud, a person associated with the Syrian establishment of the security services unleashed an avalanche of harsh statements against Moscow. In his article, he writes: “If Assad wanted to, Putin would no longer and not only in Syria but throughout the region and around the world. Putin’s name would be erased from Russian history forever.”

So, harsh words were more a retort. I remind you that Khaled al-Aboud at the same time openly praises Iran and considers that Syria should turn in the direction of Tehran, forgetting about Moscow. May not be too far-sighted position, but Khaled al-Aboud is not the only one who thinks in Syria. He understands that, for example, only with the help of Iran, Syria will ever be able to regain the Golan heights.

What is Khaled al-Aboud had in mind when he wrote that “if Assad wanted to, Putin would be no more”? Probably he means the broader context of the Russian role in the Syrian war, alluding to the fact that Russia and Putin saved its geopolitical reputation (and status) of the intervention in the Syrian conflict. So Russia wanted to demonstrate to his opponent, the United States, that it is dangerous and does not intend to quietly watch as she is surrounded by us military bases and missiles. The Syrian war is a complex phenomenon with many causes and reasons, and it is possible that Russia is participating in it, guided by including these considerations. However, in his anger Khaled al-Aboud has gone too far. The fact is that if not for Russia, which in September 2015 sent its armed forces into Syria, it is likely that Assad would be gone, including, perhaps, among the living. What would happen to the attacked leader left without external support, we have seen in Libya in 2011, for example, the tragic fate of Muammar Gaddafi.

The current anxiety in Damascus and Moscow — a kind of epilogue of the war. Some forces in Damascus (not necessarily Assad himself) would like to get rid of the subordination to Russia and get closer with Iran. There is nothing new. All aspects of this crisis have long been known, and now this hidden crisis breaks out. 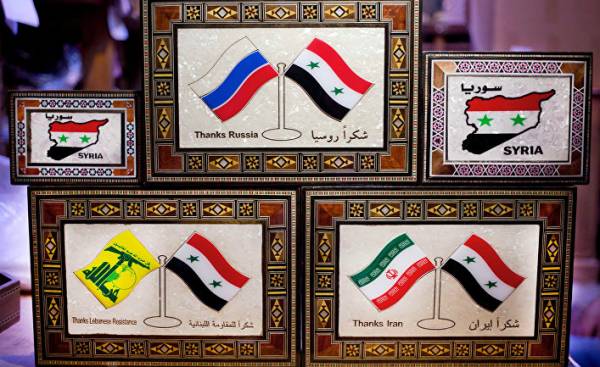 © AP Photo, Hassan Amatriciana wooden boxes in the gift shop in Damaskinskaya ideas of Damascus, causing Moscow’s paranoia and great fear, and the strongest fears are rooted in the experienced traumas. Of course, such an injury was the war in Afghanistan in which it lost, and even lost because of her state — the USSR. The collapse of the Soviet Union resulted in the fragmentation of power, which was controlled by Moscow. Russia is a Federation of many republics, including those that “Slavic” is not called. Fear of a repetition of the deepest injury in the new history, of course, remains, although Russia is not as involved in the conflict in Syria, the USSR in Afghanistan.

I still recall the recent interview to the influential American leaders at the Hoover institution. The current US special envoy on Syria, James Jeffrey openly declared that his mission is one: to make Russia “bogged down” in Syria. “Our military presence, although small, is important to the overall picture. We therefore call upon Congress, the American people, the President to keep those forces [in Syria], but again, this is not Afghanistan is not Vietnam, this is not a quagmire. My goal is to make it a swamp for the Russians,” said Jeffrey.

If Moscow wins the paranoid (and the line between paranoia and justified fear can be very subtle and vague), there will think that Jeffrey or any other American agent dark night goes to presidential Palace in Damascus and there to negotiate with Assad about the betrayal of the century. There is no data that suggests that idea, but Russia will consider all options. Article the former Ambassador Aksenenko — Overture to the strengthening of the Russian pressure on Damascus, but if the Syrian government will come to the conclusion that Russia is not the only map on which he can supply, and that no more should unconditionally obey her, as he had earlier in the war, for their own safety.

In fact, some unions are stronger during the war than after it, and the Syrian war is no exception. It is also true that between Moscow, Damascus and Teheran there is a big difference. Although all three are enemies of the United States, it will not contribute to their Association, because their ideas about how to counter American attacks, are very different. Against this background, all other differences will only be exacerbated. The war in Syria really was a “war for Syria,” for the impact on her, for her access to the Mediterranean sea, for her, as a base from which to project power at great distance, and this “war” will last long even after the weapons are stored.