In the third largest city of the United Arab Emirates Sharjah, where there are many wonders to discover, lighted, 40-story skyscraper.

The flames engulfed almost all of the tall building.

Residents of the skyscraper and at least five nearby buildings were evacuated. On victims or victims of fire are not reported. But a large number of vehicles were damaged due to debris falling from a tall building.

According to eyewitnesses, the fire broke out in the building next to the restaurant.

Sharjah fire: According to eye witnesses, the blaze erupted in a building next to Taj Bangalore restaurant.
Details…https://t.co/ECgPVKKWVk
Video by Shihab/Khaleej Times pic.twitter.com/s8XEiZCIgc

Some time later, according to local media, the fire managed to localize.

After the fire five seniors complained of shortness of breath and they received medical assistance on the spot.

Earlier it was reported that in China a fire engulfed the skyscraper. The fire spread through the outer skin of the building to the upper floors.

We also wrote about TOP 10 most beautiful skyscrapers in the world. 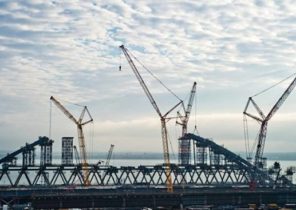