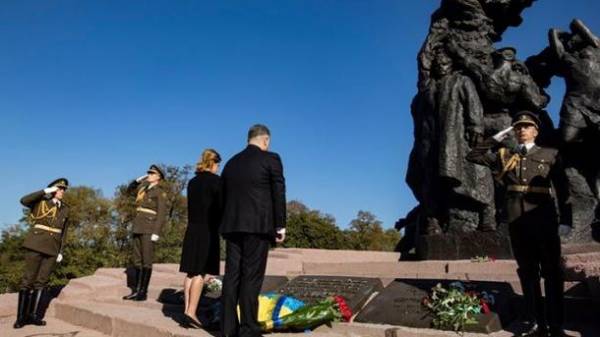 The President of Ukraine Petro Poroshenko honored memory of victims of Babi Yar and laid flowers to the monument to the Holocaust. This was reported on his page in Facebook.

He reminded that this is a common tragedy for the Jewish and Ukrainian peoples.

“Babi Yar is one of the deep wounds caused by the Holocaust. This is our common tragedy – especially the Jewish and Ukrainian peoples. Eternal memory to the innocent victims,” – said Poroshenko.

The President reminded that the duty of the Ukrainians is to remember that such tragedies are not repeated ever.

Recall, these days marks 76 years since the Babi Yar tragedy in the capital — the peak of the mass executions of the Jewish population of Kiev. Here in 1941, only two days, 29-30 September, the Nazis killed nearly 34 thousand people. In total, according to various estimates, from 1941 to 1943, this place has shot from 70 to 200 thousand people. The anniversary of the tragic events of the national reserve “Babi Yar” Holocaust Memorial center “Babi Yar” presented the project of the Lapidarium — exhibition of specimens of ancient writing on the gravestones of the former Lukyanovka Jewish cemetery.