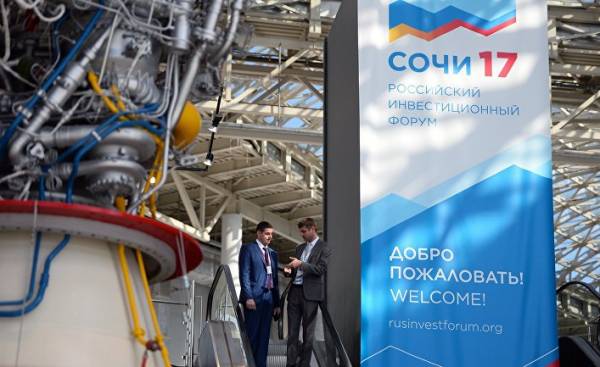 Russian investment forum has kicked off in Sochi on February 27 and lasted two days. This site is designed to develop business relations between Russian regions, without overseas investment. According to the Kremlin-controlled the head of the Crimea Sergey Aksenov, only the first day of the forum, representatives of the Peninsula has signed four agreements worth about 11 billion rubles. Aksenov says that in the Crimea now implement 140 investment projects for a total of about 144 billion rubles.

The head of the Crimean expert center Alexey Starodubov explains what really means the statement by the Russian head of Crimea success for your investment:

— This does not mean that Sergey Aksenov went on an investment forum and brought back in the bag 11 billion rubles. In Sochi signed an agreement of intent to invest, under which there were no concrete economic basis. Crimea remains an area cut off from international investment. Some Russian companies that are not oriented to global markets, can really invest in some projects on the Peninsula, but only if they push power. Western companies can theoretically work in the Crimea through intermediaries, but as soon as this information leaked, they will have big problems. This state of Affairs the Russian authorities of the Peninsula are called “good investment climate”.

Former Deputy of the State Duma of the Russian Federation — Dmitry Gudkov: “we Have three years ago, before Crimea $ 70 billion was foreign investment, which country (Russia — approx. ed.) did last year was 1.7, which is more than 35 times reduction, and over the past year, another 3% reduction in investment. When the investment is reduced — this means not built businesses, not to create jobs, not pay taxes and so on. When investment forums Vladimir Putin talks about why decisions were made about the introduction of troops into Ukraine, this suggests that the scared investor, the investor will not come here. Even if the authorization to cancel, it will not lead to investment growth, because in our (Russian — approx. ed.) the courts be impossible to protect any property.”

Associate Professor, Financial University under the government of the Russian Federation Sergey kostyaev notes that due to sanctions and capital outflows from the Russian authorities do not have enough money even to support the important Crimean enterprises:

— Indeed, the former foreign investment in the economy of Russia is impossible, with one exception: the Russian businessmen can return their derived abroad money. About Crimea and say nothing: according to my observations, Russian authorities often do not even try to help local companies and enterprises that fall under the sanctions hit. For example, “Sevastopol sea trade port” is actually bankrupt, and the government is not concerned. Annexed Crimea is a subsidized region, continuing to suck money out of Russia. This situation will change only if Vladimir Putin agreed on lifting sanctions against Donald trump, but this is every day less likely.