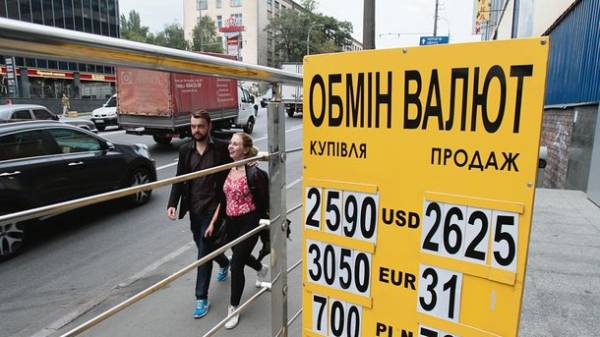 After a summer of strengthening the hryvnia in the autumn of the dollar, as predicted finanalytica, started to grow, but not as fast as expected. If the first week of September he scored in a cash sale from 70 cents, rose from 25.75 UAH/$ 26,45, for the second week fell to 26.2. Experts ‘ opinions differ: some are of the “classic” forecasts and promise by the end of the year the growth rate above 27 UAH/$, others believe that this year is even laid down in the law on the state budget rate of 27.2 UAH/$ is reached. And the coffers will fill at the expense of other revenues, in particular due to the significant growth of the economy and vypilivaya salaries.

Will RISE in price. That the dollar will go up, sure banker Igor Lvov and economist Ivan Nikitchenko. They both refer to the rate of 27 UAH per dollar, which the Cabinet laid out the main budget of the country, and that without this it will be difficult to achieve the planned revenues. And still need money to pay in October — December, higher pensions, which the government promised to introduce from 1 October.

“On this basis, the dollar by the end of December will cost up to 28 UAH, otherwise the budget will be difficult to implement,” — said in Lviv. Nikitchenko believes that the rate will definitely be over 27 UAH/$ in the worst case approach to the course which the government wants to put in the budget for 2018, — 29 UAH/$. “In recent years there is a tradition: what course in the budget, so the country begins the year. Why will be the further devaluation of the hryvnia is the beginning of topstone, two debt payments to the IMF, and it is unknown whether we will get a tranche from the Fund in 2017, plus the rather high inflation. If Ukraine will be able to place Eurobonds, it will support the course as possible IMF tranches this year. Then it will be about 27 UAH/$,” — said Nikitchenko.

CHEAPER. The President Ukranalittsentra Alexander Ohrimenko confident that the national Bank due to the accumulated reserves will be held this year, the dollar is not higher to 26.5 UAH/$. This, according to the analyst, is not facing a budget shortfall, as the country began to see economic recovery, the market receives more remittances of migrant workers.

With him agrees the analyst of “Forex club Ukraine” Andrew Shevchishin: “this year the hryvnia exchange rate to stabilize external resources, first of all tranches of the IMF (about $2 billion — Ed.) and placement of Eurobonds, which prepares the Ministry of Finance. Gave significant result and increase minimum wages, taxes on increased revenues, as have less subsidies from the Treasury to the Pension Fund. Therefore, the rate will reach a maximum of 27 UAH/$, is lower than those calculated by the government.”

National BANK. The regulator is leading a monetary policy aimed at supporting the hryvnia exchange rate. This is made clear to the Deputy head of the NBU Oleg Churiy, who said that the national Bank is not focused on rate, calculated by the Cabinet, and on the market and ready to meet the demand. Yesterday the NBU came on the interbank market, announcing the sale of $100 million (about one-third of daily turnover in the interbank market). Sold was $43 million, the rate fell back to 10 kopecks., or to 26.07 UAH/$. This means that in a cash sale the single currency will 26,3—26,4 UAH/$.

EURO. But a cheap Euro while analysts do not promise. The main reason the Euro will continue to strengthen against the dollar due to the fact that the Eurozone economy is on the rise and the EU Central Bank is not going to increase the discount rate, but in the US, on the contrary, what the difference in price is constantly increasing. “If at the beginning of the year, the ratio of the dollar, the Euro, was of 1.04, now 1.19 and 1.20 m, this explains the increase of the Euro in Ukraine,” – said Nikitchenko. It is estimated that before the end of the year may be of 1.22.

Okhrimenko predicts that the probability of further strengthening of the Euro against the dollar is three times higher than weakening, and by December can be 1.25. Only Shevchishin sure that the period of strengthening Euro is over and the end of the year there may be a small rollback to 1.17. Summarizing the predictions, we can calculate that the rate of cash Euro in December will be in the range 31 to 34 UAH (now of 31.2-31.4 per).