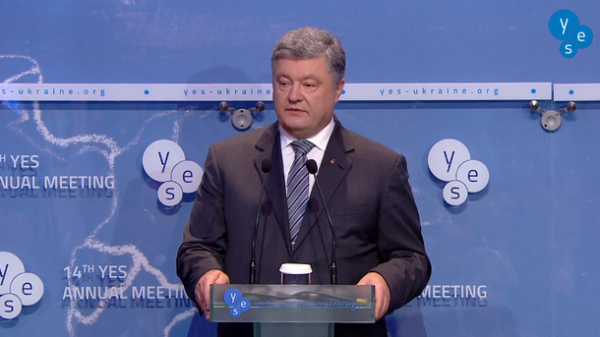 President of Ukraine Petro Poroshenko, speaking at the Yalta European strategy, noted the potential of the Ukrainian economy and Ukraine’s progress in overcoming the economic crisis.

“Our economy grows, the banking system cleared… the Most famous international agencies improved the ratings of Ukraine. We use every opportunity to transition to economic growth”, – said Poroshenko and thanked “Lithuanian friends” for “a Marshall Plan for Ukraine“.

The President also stressed the importance of Euro-Atlantic and European aspirations of Ukraine.

“We will be the engine of the continental economy. We are moving towards full membership in EU and NATO. Recent years have shown that it is a guarantee of Ukrainian independence, security and prosperity”, – said Poroshenko.

However, the President of Ukraine commented on the tension in Europe in connection with the elections in the Netherlands, France and Germany, noting that the unpredictability of elections is a sign of democracy.

“Putin was delighted last year when Europe was disintegrated, the elections were unpredictable. But it is a sign of democracy in Russia, all elections are predictable. This year unity in Europe could win,” – said Poroshenko.