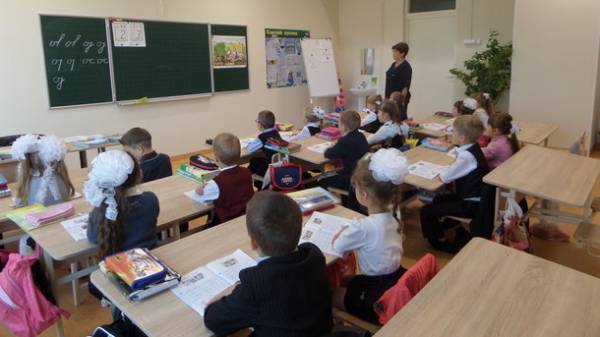 On September 5 the Verkhovna Rada adopted the education reform, which is based on the law “On education”. The changes he envisages, caused a sharp reaction in some countries-neighbors of Ukraine. About dissatisfaction said Hungary, Romania, Moldova and Russia. In their opinion, some provisions of the law infringe upon the rights of their minorities in Ukraine. In particular, we are talking about the fact that the language of the educational process in educational institutions is the state language – Ukrainian. However, the Ministry of education and science of Ukraine claim that this rule will not prevent representatives of national minorities learn another language.

For each of the countries, criticized Ukraine adopted the law on education, the use of cross-border communities was an important bargaining chip, and not always in cultural interests, so they are not interested to abandon it, told “Today” the Director of the Institute of socio-political designing “Dialogue” Andriy Miselyuk. According to the expert, on the contrary, they intend to defend their interests, including appealing to the European community and threatening Ukraine’s refusal to support its international endeavors. Moreover, the reaction of these countries could be harmonized or coordinated, according to Miseluk.

“Reaction, which is quite uniform, at once suggests the idea that it is at least coordinated campaign. Perhaps not from a single centre ongoing, but coordinated in the sense that the same claim form, response, timing, expressions etc., – the expert said, – I think that is the case, especially in Moldova, where a Pro-Russian President, coordinating their actions with Russia.”

At the same time, the analyst Yaroslav Makitra does not believe that these countries and their reaction to the adopted law should be associated since each of them has its own interest, which in this situation does not coincide with the national interests of Ukraine. As noted Makitra, the Parliament adopted the law may narrow the educational programs of such countries as Hungary and Romania.

“With the help of different educational programs they support their people here and, in fact, in the future, depending on what kind of development, it could become a serious instrument of influence on Ukraine, says the Nut, Is of Course, Hungary, Romania will protest because they are losing influence to these territories, on the situation in Ukraine, in fact. Including Russia”.

At the same time, in Ukraine there are regions where the residents, for example, the Hungarian community do not speak Ukrainian, and the education of children and even the documentation is being conducted in the Hungarian language. A similar story is happening with the Romanian community, he said.

“Actually, this is a big problem of Ukraine, which for many years did not dare. It is hoped that the education act is one of the elements of protection of national interests of Ukraine, – says Makitra, Sooner or later Ukraine would have to solve the issue. Because when hundreds of thousands citizens of other countries living in our territory, they have their own cultural identification, etc., you lose the element of statehood of Ukraine”.

According to Andrei Miselyuk, in this situation, Ukraine will defend its position on the adopted law on education. At the same time, the expert does not preclude attempts to negotiate.

However, as noted by Yaroslav Makitra, the criticality of the situation depends on how Ukraine’s decision was strategically thought out. So, if the rules of law have been taken spontaneously and with no clear strategy, then Ukraine can expect diplomatic problems with countries that are critical of him. If there is a clear strategy of how to react in this situation, and Ukraine has enlisted the support of this bill other players on the international stage, then perhaps she will be able to get away from this pressure and by “calming” the ambitions of opponents.

According to the analyst, Ukraine needs to appeal to the fact that the European Charter for regional or minority languages observed, and that this law in no way infringes on the right to education and cultural identity of minorities. To prove it, she will be able to “repel the attacks of these countries,” said the Nut.

What is “wrong” with the new law

Negative reaction of a number of countries was caused, in particular, what determines the Verkhovna Rada adopted the law, the language of the educational process in educational institutions is the state language. Persons belonging to national minorities guaranteed the right of education in native language along with the Ukrainian language in separate classes or groups in public institutions of preschool and primary education.

The Ministry of foreign Affairs of Hungary said that the decision of Ukraine is in opposition to European values, and “Ukraine plunged Hungary stabbed in the back by amending the law on education, which strongly violates the rights of the Hungarian minority”. According to the Hungarian side, the law restricts the rights of 150 thousand ethnic Hungarians. Moreover, Hungary turned to the EU, the OSCE and the UN with a complaint against a new education act and stated that it would no longer support the initiative of Ukraine in international organizations.

Criticism of the adopted law was made by the Ministry of foreign Affairs of Romania, stating that, in their opinion, this law violates the rights of the Romanian minority. Concerns about the fate of the Romanian and Moldovan communities in Ukraine in connection with the adopted in Ukraine, the law stated the President of Moldova Igor Dodon. He noted that in Moldova there are a number of schools in the Ukrainian language and the rights of the Ukrainian community are respected. He urged the Ukrainian authorities to withdraw the law “About education”.

Harsh reaction in Russia. In Russia believe that Ukraine, thanks to the new law is trying to get rid of minority languages in the educational system, the statement said the foreign Ministry. The Department stated that, in their view, therefore, Ukraine is trying to carry out a complete Ukrainization of the educational space of the country and allegedly violated the undertaken international obligations in the humanitarian sphere.

Reacting to the current Prime Minister of Ukraine Volodymyr Groysman instructed the Minister of foreign Affairs Pavel Klimkin and the head of the Ministry of education Lilia Grinevich together with the leadership of the Verkhovna Rada Committee on education to explain the EU some provisions of the new law. For this 15 September in Ukraine will visit several ambassadors of member countries of the European Union.

Ukraine’s position regarding some provisions of the law

The Ministry of education and science of Ukraine declare that the rate of language learning in the Verkhovna Rada adopted the law “On education” with the Constitution of Ukraine and the European Charter for regional or minority languages.

According to the Ministry, Ukraine in the languages of national minorities there are about 400 thousand children in 735 schools, and, as a rule, in such institutions the Ukrainian language is studied only as a subject. The Ministry of education “has to admit that there is a strong tendency to a reduction and deterioration in the quality” of school education among children from schools with instruction in languages of national minorities, which is confirmed by results of external independent evaluation (in 2016 for 60.1% of students from the Romanian and Hungarian minorities are unable to successfully pass the test on the Ukrainian language).

The Ministry noted that this situation leads to the violation of the constitutional rights of children for admission to educational institutions, so it is important to expand the teaching of subjects in state language in minority schools.

“For the first time in the history of independence at the legislative level expanding the volume of training in the Ukrainian language in state and communal educational establishments where teaching is in the languages of national minorities”, – stated in the explanation.

For children who are currently studying in the languages of national minorities, provides for a transitional period until 1 September 2020. These children will receive secondary education, with a gradual increase in the number of educational subjects taught in the Ukrainian language, and by 2020 should start teaching in the state language.