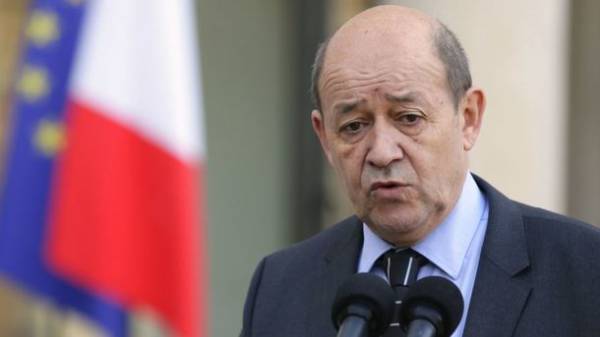 Foreign Minister of France Jean-Yves Le Drian said that the initiative of the President of Russia Vladimir Putin at the UN mission in the Donbass requires “thorough scrutiny”. He said this to journalists at a briefing in Moscow after talks with Russian foreign Minister Sergei Lavrov.

“We have read with great interest the initiative of the Russian Federation at the UN contingent, the security of the OSCE who work there. We now consider this initiative with great attention. Such decisions require careful scrutiny on our part and on the Ukrainian side. Additional comments will not” – said Le Drian, answering the question, should the UN peacekeepers be at the frontline or in the entire territory of Donbass, and whether the Russians to take part in it.

Earlier, Russian foreign Minister Sergei Lavrov disavowed the statement of the President of the Russian Federation Vladimir Putin on the entry of UN peacekeepers to the contact line in the Donbas. He said this at a briefing in Moscow after talks with French foreign Minister Jean-Yves Le Drian, that the initiative came from the President, but he would like to clarify the details.

“This is not a UN force, it is a mission to promote the security of the OSCE observers. It is in full accordance with the logic of the Minsk agreements”, – Lavrov said.