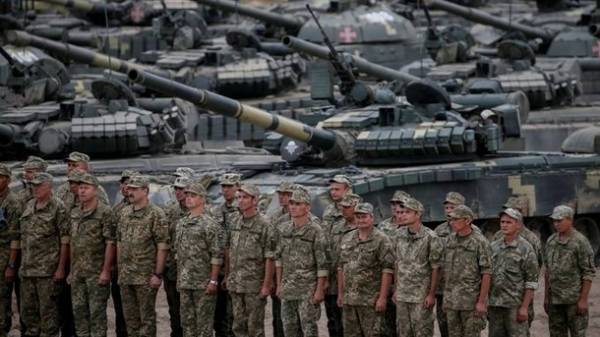 In Ukraine began to discuss the defense budget by 2018. According to the Secretary of the Council of national security and defense Alexander Turchinov, it needs to be at least 5% of GDP, that is about 162,7 billion. Of them to the needs of the Ministry of defense plans to allocate approximately 74 billion UAH. According to a member of the Committee on national security and defence, Dmytro Tymchuk, one of the main tasks for the Ministry of defense will spend the money because of the bureaucratic procedures of the state defense orders for 2017 is performed with difficulty. The Ministry of defence with these words do not agree, saying that hundreds of contracts have already been signed.

The army was strong

Recently, the national security Council discussed the defence budget for 2018. As reported by the NSDC Secretary Oleksandr Turchynov, the financing of the defense sector next year will be not less than 5% of GDP. “This position becomes an axiom for the budget policy of our state”, — said Turchinov.

According to him, the financing will be for the General Fund (i.e.
directly from the budget), which would be about 156 billion UAH. Special Fund (which is formed due to the specific economic activities of ministries and agencies) will be formed solely on the basis of proposals of power ministries and departments and will be about 6.3 billion UAH. “That is the total funding must be at least 162,7 billion (in 2017 was 134.5 bln. — Ed.)”, — said Secretary of the NSDC.

Earlier it became known and about how much money will be allocated for needs of the Ministry of defence. “If this year we were provided the financial resources at over 64 billion, next year will be 10 billion more,” — said at a press conference in July, first Deputy Minister of defense of Ukraine Ivan Rusnak. Thus, the Ukrainian army in the next year to around 74 billion UAH.

Speaking about the defence budget, Oleksandr Turchynov was referring to the tools that will be used to Finance all law enforcement agencies, defense Ministry, interior Ministry, security service, etc. sources in the defense Ministry explained that the defense budget should consider only those funds that go directly to the needs of the Armed forces. However, officially in the military satisfied the amount will be allocated in the coming year.

“The budget for next year will be sufficient to make a significant step forward and achieve maximum results in the reform of the Armed forces, the modernization, equipping, training,” — said the Minister of defence Stepan Poltorak. According to him, currently, create a modern infrastructure of training grounds and centres throughout Ukraine, which meet NATO standards, learning opportunities, leisure and training. “All that is in Ukraine today, seeks to army strong,” — said the Minister of defence. 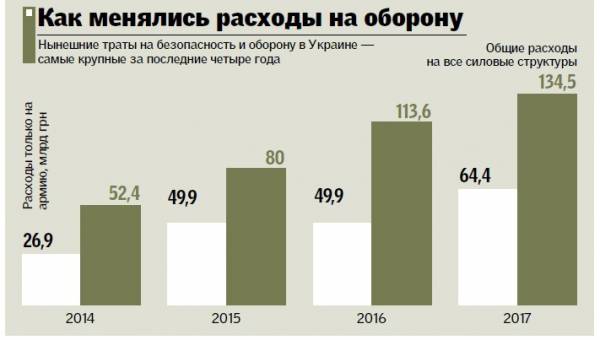 How to change the military budget

If in 2018 the army will get those 74 billion mentioned by Ivan Rusnak, it will be the largest defense budget in the last three years, and indeed for the whole history of independence.

In reality, this amount may be greater, because in the beginning of August, President Poroshenko signed amendments to the state budget of the current year, which include the allocation of additional 6 billion UAH for financing of several important trends in the defense sector of Ukraine. The money was confiscated from some high-ranking officials of the previous government should be directed, in particular, on the construction of a plant for the production of ammunition, as well as the acquisition of new types of weapons, including tanks “Oplot”.

However, 74 billion might not be enough for the normal functioning of the army. As reported by “Today,” even in 2017, the defense Ministry asked 108 billion funding for critical needs in 85 billion, and the world experience suggests that the needs of the army shall be calculated by the formula $10 billion for 100 thousand soldiers. And since the number of APU is about 250 thousand people, it is easy to calculate how much money really need our army of $25 billion, or 650 billion.

It is clear that the increase in funding is in any case well. “It indicates that will be strictly observed social benefits in terms of increasing the salaries of military personnel, an increase in provisions for the repair and modernization of military equipment and conduct exercises, improve combat training. This is the most relevant things in terms of aggression. Now the task of the Ministry of defense — master the money 100%,” — said the chief editor of “Information resistance” Yuri, Karin.

How to spend money

The question of how to spend money, perhaps equally relevant, as their relatively small number. According to a member of the Committee on national security and defence, Dmytro Tymchuk, military on the front lines in the fourth year of war cannot obtain advanced weapons due to the fact that the country is not fulfilled the state defense order. One of the reasons is the bureaucratic factor in the implementation of already approved contracts. “Even with the approval of the orders of new weapons due to the delay of signing of contracts for the production of military equipment do not get these weapons in time”, — said Tymchuk.

According to him, in 2016, state-owned enterprises began to work on the state defence order in may. And in 2017, the work had not begun as of early July: “as a result, in the first quarter of 2017, were produced only 5% of the ordered equipment.”

As Tymchuk noted, this leads to the fact that the new BTR-3 is not adopted and cannot be included in the state defense order, although they have long been used by the National guard and is actively operated during the hottest phase of the conflict in the Donbas. Hundreds of production enterprises, which employ about 80 thousand professionals are now busy working almost a third, and employees of these companies “are under threat of lack of money for salaries.”

The Ministry of defence to retort that as part of the defense budget 2017 have already signed hundreds of contracts worth $ 4.5 billion. “This year for the Mat we have purchased about 300 new and modernizirovannyi samples of weapons and military equipment. With the beginning of the year staff issued 17 thousand sets of armor, 16 thousand of Kevlar helmets, 220 thousand pairs of shoes and 23.5 thousand sleeping bags”, — said the speaker of the Ministry of defense Maxime Prout.