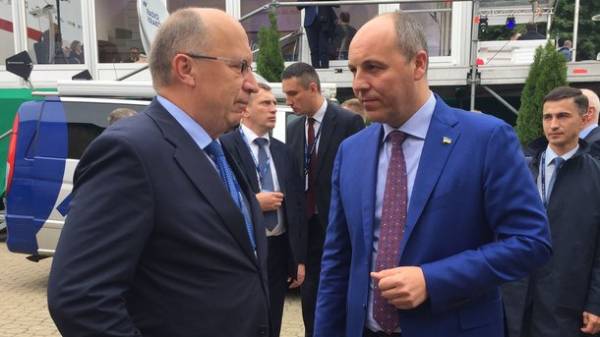 Ukraine and Lithuania agreed to establish a list of countries in the EU that may be skeptical of the idea of a “Marshall Plan for Ukraine”. This was on the sidelines of the Economic forum in Polish Krynica-zdrój, said the speaker of the Verkhovna Rada Andrew Parubiy.

“The idea of a “Marshall Plan for Ukraine” was first performed at the parliamentary Assembly Ukraine-Poland-Lithuania, where Lithuania was, in fact, presented this plan. And then we even in the final document of the Assembly, the idea was noted and agreed that we will together to implement it. I can say that Poland is our ally in this matter, and I asked their Polish colleagues to participate more actively in the promotion of this idea in the European Union”, – said Parubiy.

According to him, should convince skeptics of the plan, as a common position in EU about the “Marshall Plan for Ukraine” no.

“We even agreed on the position to determine the list of countries in the EU that may be skeptical of this idea and to send a parliamentary delegation and discuss with the Ministry of foreign Affairs that the idea was to convey” – said paruby.

Recall that on 6 September in the framework of 27-th Economic forum in Polish Krynica-zdrój, former Prime Minister of Lithuania, and nowadays the Deputy of the Lithuanian Parliament Andrius Kubilius presents a “Marshall Plan for Ukraine”.

In an interview with “Today,” he said that at the final stage of development of the technical plan is a Supplement to the main “Marshall Plan for Ukraine”. It will include investment proposals in three priority Ukrainian sector: infrastructure, decentralization, and small and medium businesses.