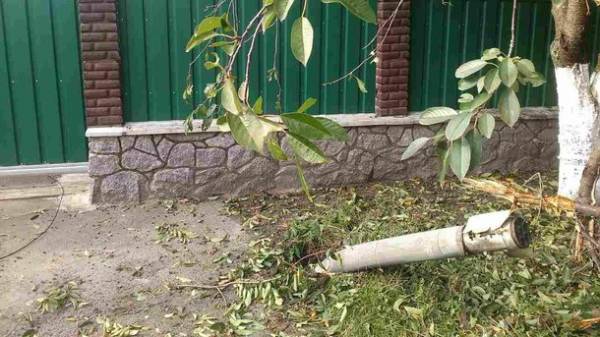 In the night from 26 to 27 September began a large-scale fire with explosions at an ammunition depot in the Vinnitsa region. The website “Today” has gathered all the details, facts, and versions that exist at the moment.

The evening of September 26 there was a fire at the ammunition depot near Vinnitsa, near the town of Kalynivka. First were heard the solitary sounds of explosions, which gradually escalated into gunfire. The explosions began to subside only in the afternoon of September 27. In the night of Thursday, September 28, the fire was localized.

Despite the large radius of the explosions, the winery in the affected area of ammunition did not fall.

Immediately to extinguish the fire were sent two military tanks of the SSES and a detachment. At the scene of an accident left the representatives of the General staff, Ministry of defense and the National police of Ukraine. Prime Minister of Ukraine Volodymyr Groysman, who arrived in Kalinovka, said that all measures are taken to eliminate the consequences of the situation. The President of Ukraine Petro Poroshenko has convened a war Cabinet.

“Mobilized all services, all work, the situation is under control, measures are taken to extinguish the fire, mobilized the equipment and personnel. Now everyone’s doing everything. Each division performs its functions – SSES, Netpolice, Ministry of defence,” – said Groisman.

Immediately after the bombing began immediate evacuation of inhabitants of nearby settlements. All were evacuated about 30 thousand people.

Now on the scene within a radius of 50 km there is a limitation of air traffic. “We are immediately “closed” the sky in a radius of 50 km above the epicenter of events. This restriction will last at least another day,” – said the Minister of infrastructure Vladimir Omelian.

Besides, near the place of incident were closed to traffic, the road was proposed safe routes to bypass the area of the incident. As of Wednesday evening, September 27 there was restricted movement of all types of transport, including vehicles on the highway Zhitomir – Mogilyov-Podolsk; railway transport on the stretch of Pine – Kalinovka South-Western railway.

The results of a large-scale incident

In the evening of 27 September, the intensity of explosions in Kalinovka seriously diminished. This was stated by the head of Vinnytsia regional state administration Valery Cow. “There are a few explosions, but the intensity decreased in 5 times,” – said the Cow. And from 19:00 Wednesday, as reported in the evening in the defense Ministry, there was not a single explosion. As of Thursday morning, the 28th of September was heard single explosions.

According to Koroviya, people were evacuated from the Kalinovka, as well as from the villages of Seal, mole cricket, Lavrivka. No fatalities, two people were slightly injured.

Fortunately, a large part of the Arsenal was not injured, said the officer of Department on public relations of the General staff of Ukraine Vladyslav Seleznyov.

“With the help of UAVs were studied the grounds of the Arsenal, it was discovered that about 70% of the Arsenal from fire has not suffered”, – he said.

After the incident in Kalinovka there began to appear the marauders. So, police arrested three people who may be involved in looting. But, according to the Deputy head of national police of Ukraine Alexander Fatsevich, the need to impose a curfew yet.

At the same time, the military across the country are taking action. On the territory of the Land forces of the armed forces introduced enhanced protection mode. “The personnel that is involved in the performance of duty daily attire duty under the Charter, the right to use weapons during military service. Command of Land forces of VS of Ukraine reminds that any unauthorized entry into the territory of the units shall entail liability under the legislation of Ukraine”, – said the Agency.

The military also appealed to the citizens with the request to inform the police about suspicious persons near military sites or in the locations of troops.

Versions about the causes of the emergency

The General Prosecutor’s office investigates the facts of explosions in warehouses in Kalinovka of Vinnytsia region and examines four versions of a criminal offence. Although many in Ukraine and in the government most likely option is called a diversion. The military Prosecutor’s office has already made in the unified register of pre-trial investigation proceedings under the relevant article (article 113 “Diversion” of the criminal code of Ukraine”).

Interestingly, on the eve of explosions in Kalinovka detained several subversive groups, said the officer of the Main Directorate of development and support of the material support of the armed forces Sergei Misyura.

“It’s a diversion. In this regard, and our intelligence even with the number 25 in the Vinnitsa region under the guise of anti-terrorist exercises were raided and prosecution of subversive groups. Yes, it’s not one person. Two days passed and maintain these groups. The bulk of them were detained. The majority, but not all. Therefore, one group was able to deliver on the drone explosive device” – said Misyura.

At the same time, the chief military Prosecutor of Ukraine Anatoliy Matios said on 28 September that no subversive group in the territory of the Vinnytsia region were found, none were detained and none escaped.

“Subversive groups, which says Facebook or other, the consequence … in the territory of the Vinnytsia region not found data on this. Second, data about unmanned aerial vehicles the investigation, which started work an hour and a half from the beginning of the explosions, did not set Any group mentioned by the Advisor to the Minister of defense, DRG or those arrested or who escaped – was not” – said Matios at the briefing in Odessa

Experts, in turn, tend to believe that the warehouse fire was started without the involvement of the Russian special services.

“I am inclined to think that it is a diversion, organized by our enemies – the Russians. This can be done using drones (in the words of fire among the local rumors about drones on a place of state of emergency – ed.) is very effective now, and the Russians is not the first time it is used. In addition, it is possible (act – ed.) of the agent, to recruit the guard and put the clock mechanism”, – commented military expert Ihor Romanenko.

Russia is interested in such incidents as the explosions of ammunition in military warehouses, I’m sure the veteran of foreign intelligence of Ukraine, Lieutenant-General Vasily Bogdan.

“Now in the U.S., and Canada addressed the issue of granting Ukraine of certain types of weapons. All acts of sabotage on the part of Russia aimed at weakening the combat capability of the APU, but not only. Another goal is to compromise Ukraine as a reliable partner in military-technical cooperation”, – said Bohdan.

At the same time, do not rule out some version of negligence. So, the media reported that earlier in Kalinovka were violations of the procurement of fire-fighting materials. In April of this year, Kalinowski, the court sentenced the commander of the military unit Igor Malezhik. He was accused of negligent attitude to military service in the conditions of the special period in the purchase of fire prevention materials.

Note, however, “Today” spoke with one of the former military Arsenal. He said that the regime was very strict – the passage to the area where the explosion occurred, with matches, cigarettes, and even mobile phones were banned.

“As for quadcopters, you know that against them were attempts to take action. That has created a special defense. But ended up to do it – is unclear,” said the ex-employee of the warehouse.

How to prevent similar situations in the future

In order to again avoid the fire in military warehouses, Ukraine should develop defensive and offensive weapons, experts say.

“I was involved, for example, in the tests certain means that must resist attack from the air, because I Pvoshnik. But it takes time, it’s quite a complex weapon. There is a small, for example, a drone that drops bombs and ignitors, it is difficult to see and destroy. They are expensive weapons, but we do it and move on,” says Romanenko.

According to him, the problem is, that for all time the independence of such equipment was allocated only 1% of GDP, but, as world practice shows, this may not protect the proper level.

Romanenko added that the restoration of the military reserves will take a lot of money. “In order to restore all this, we need funds we are lacking. We are building a new plant for munitions, and this is again the time and money,” – emphasizes the expert.

In Ukraine this is not the first and not the second such incident. Remember only the most recent. So, at the end of March 2017 burned ammunition depot in Balakleya, Kharkiv region. Then the fire started detonation of ammunition. The woman was lost, four more persons got wounds. 265 damaged buildings and evacuated more than 36 thousand people. After the incident was initiated two criminal cases under articles of sabotage and negligence.

A few days ago a fire broke out on the same stock in Novoyanysol ‘ under Mariupol. First burned field near the warehouse, and then the fire spread to the building itself. The fire was extinguished pretty quickly, no one was hurt. Pre-incident was qualified under article 194 of the Criminal code “Deliberate destruction or damage of property”.

In 2015 there was a fire at an ammunition depot in Svatovo Luhansk region, the radius of the explosion even reached the city limits, killing four soldiers, and four civilian were wounded. And in March 2014, lit up the warehouse with tanks tucked in Cherkassy, Dnepropetrovsk region, then burned two tanks T-64, injuring three soldiers.