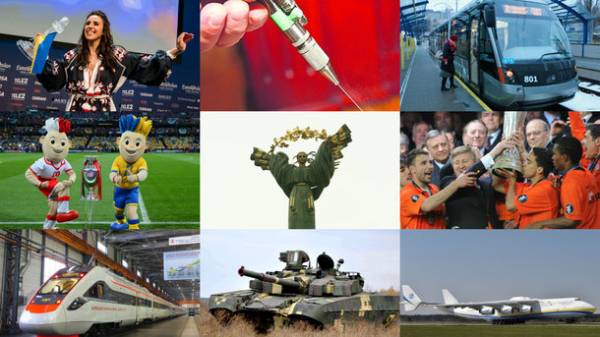 Over 26 years of independence, Ukraine has known its UPS and downs, but in the occasion you want to only talk about the good. The more that we have a lot of reasons that give the right to be proud of the country and an invaluable resource — people, burning with new ideas and reaching incredible heights. We need only recall the development of recent years, which the Ukrainians declared themselves in the world. One of them is a device for bloodless blood test, which was invented by the Kharkov. Now they are actively used by doctors in China, Saudi Arabia, Germany, Egypt, and Mexico. Thanks to the power of the spirit of our athletes associate Ukraine with the Klitschko brothers, who made a splash in professional Boxing, the owner of “Golden ball” Andriy Shevchenko and FC Shakhtar Donetsk.

Pride of Ukrainian aircraft manufacturers — world’s largest aircraft an-225. Constructed in 1988, for delivery to the Baikonur cosmodrome, ten years flying giant stood on the ground without engines. By 2001, the mu constructors Antonov modified and restored liner, which again spread their wings. On account of the Ukrainian “Mriya”, which can accommodate fifty cars, — 240 world records for flight distances, weight and dimensions of cargo. 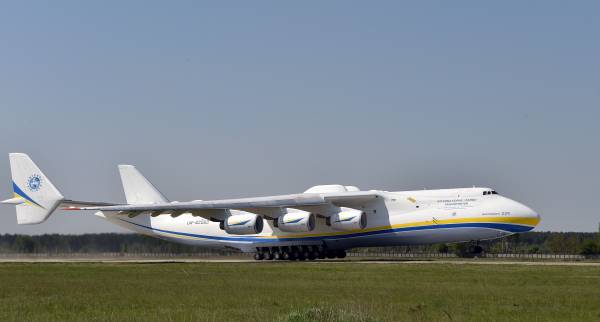 REASON NO. 2: “OPLOT” TANKS FOR THE ARMY AND FOR EXPORT

The symbol of the Ukrainian defense industry has become BM “Oplot”, the creation of which is from 1994 for 15 years worked Kharkiv designers. Taking a sample produced in the Union, T-80, the makers have equipped the tank multi-layer reactive armour, a more powerful engine and modern weapons. Due to upgrade it has no equal in a frontal collision. The crew of the 48-ton “Hold” will withstand temperatures from -40 to +55 °C, so the development of Ukrainians interested in hot Thailand, where the tank builders put 32 combat vehicles. 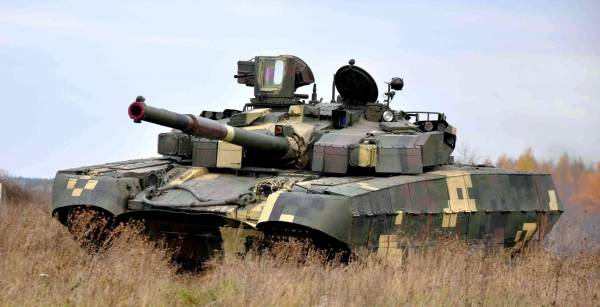 REASON NO. 3: LOW-FLOOR TRAM, FOLLOWING THE EXAMPLE OF THE GERMANS

The designers of Lviv of “Electron” Corporation designed the first low-floor tram of a domestic production, which is not inferior to Western counterparts, because in the Assembly used German technology. The new transport consists of five cars, which can be a time to carry 250 passengers. While 30-meter composition is less noisy and vibrates. Now three trams ply in the capital. 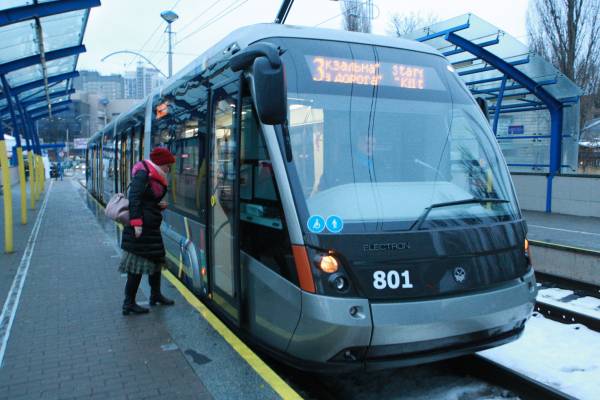 REASON NO. 4: HIGH – SPEED TRAIN TO SAVE TIME

Ukrainian railcar producers have proven that they can build trains not worse than the famous South Korean colleagues. For Euro 2012 with a pipeline of Krukovka carriages went two interregional dual-system electric passenger trains that can accelerate to a record high of 200 km/h trains Now run between the capital and several regional centers, several times reducing the travel time. 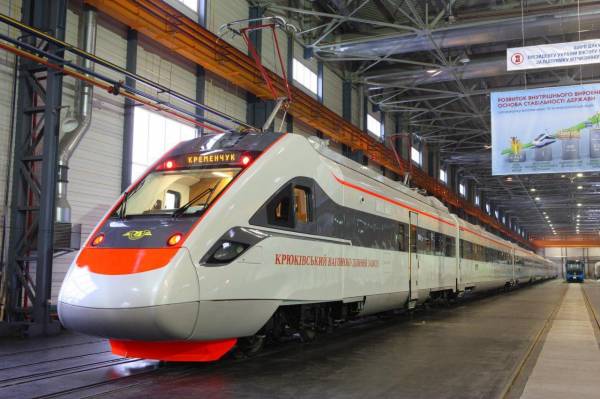 REASON NO. 5: SPACE EXPLORERS. “ZENIT” AND THE ORDERS OF THE US

Do not lag behind the colleagues and the rocket scientists. During the years of independence the employees of the Dnieper SE “Pivdenmash” 122 times launched domestic launch vehicles and by the order of 19 States, brought into earth orbit 238 satellites. This is the resumed production of the most environmentally friendly in the world rockets of the series “Zenit”, and the main customers have become the company of the United States, Italy, India.

REASON NO. 6: A BREAKTHROUGH IN SURGERY – HYDROSCALING

Scientists of the Aerospace Institute and National AsiaUniversalBank in 2012 created a liquid jet scalpel, which helps to reduce the time of surgery, and practically does not damage the vessels. 70-kg device is similar to the handpiece, from which flows a trickle of water cutting through tissue. Development has become indispensable in the handling of tumors and the removal of metastases. 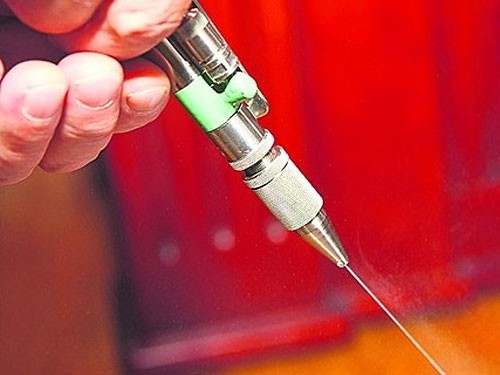 REASON NUMBER 7: THE FACE TRANSPLANT, SAVED AFTER THE BURN

Last winter experts Asinstitute surgery and Transplantology. Shalimov has held the first in Ukraine surgery, grafting skin on the face 48-year-old native resident of Sumy, which has lost half his face because of burns. In the five hours that the operation lasted, he was the recipient of 600 square cm of skin that was taken from the body. Thanks to the efforts of the medical man was able to drink and eat.

REASON # 8: IT MARKET. UKRAINIANS ARE CONQUERING THE WORLD

The Ukrainian market of information technologies were developing at an unprecedented pace and now brings the country more than $2 billion If the students wanted to become lawyers or managers, but now the majority is aiming at programmers, because there is a possibility, creating new projects, in the literal sense of the word to conquer the world. More than 100 thousand of our programmers work in international companies creating apps and games that are enjoyed around the globe. Among them, the popular messaging app WhatsApp has captivated gamers around the world Ukrainian post-apocalyptic game on the theme of Chernobyl S. T. A. L. K. E. R.

In 14 years of participation in the Eurovision song contest Ukraine was twice victorious. Respectively, and twice became the hostess of the contest. In 2004, a victory for the country was won by the singer Ruslana with her song “Wild dances”. Her energetic setting with Hutsul motifs was remembered by the fact that during a rehearsal of the Ukrainian glass artists scene could not resist the dance of pressure and cracked. In 2016, the main prize of the contest — crystal microphone — in Ukraine brought Jamal, has conquered the world with his touching song “1944”. Song contest in Kiev set a record by presenting the longest red carpet in the history of Eurovision with a length of 265 meters. 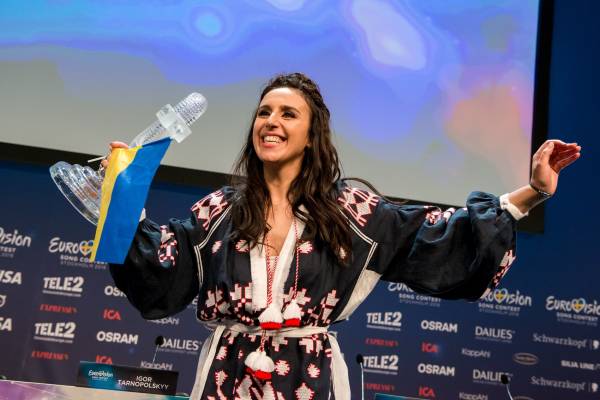 REASON NO. 10: THE OLYMPIC CHAMPIONS, A BREAKTHROUGH IN THE CASE AND A FEAST OF FOOTBALL

And how many reasons to be proud of our athletes, simply do not count. Only at the Olympic games “born” 41 champion, winning 46 gold medals. The record holder was the “goldfish” Yana Klochkova, who put in the Treasury of the four top awards.

Your contribution to the awareness of Ukraine in the world was also made by the owner of “Golden ball” Andriy Shevchenko and boxer-heavyweight Vladimir and Vitali Klitschko.

Great achievements can boast about in football: in 2009, the Donetsk Shakhtar under Mircea Lucescu has won last in the history UEFA Cup, winning in the final of the German “the Werder” with the account 2:1. And in 2012 together with Poland successfully held the European Championship, made happy millions of fans.