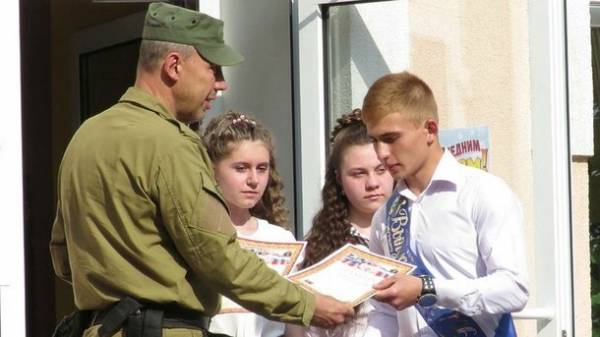 Students of Donetsk for the fourth time will celebrate the new academic year in the occupation. Every year pupils getting smaller: high school students leaving the territory to study and get an official certificate, Junior parents are taken away far from the war and poverty.

There are rumors that two or three schools in Donetsk September 1 will not open because of lack of students. But the serious shortfall in the universities — already a fait accompli. So, the fake “University of Economics and trade” in Donetsk — one of the once most prestigious educational institutions, where the competition reached 20 persons into place, — announced an additional set of entrance exams in early September. Donetsk residents say, “the Republic” made a bid for vocational schools and strongly invites Teens to learn from the painters, builders and seamstresses.

Donetsk mom complain: to collect the child in school — so empty your pockets almost completely. The range of shops and markets in the city seems to be needen, but nothing to choose. Clothing for students at reasonable prices and quality can still be found in consignment shops and second, but with the shoes trouble. If the price is affordable, the quality is poor. More or less decent shoes can cost half the salary of the parent, but it needs at least two pairs. Popular decision — trips “to Ukraine” for school supplies, but all of this also comes family a lot of money.

“Clothes for my daughter I ordered the Ukrainian Internet-shops. Until then walked around the market and shops of Donetsk. Experience — we have brought the cheapest “nepotrib”. Part of the children’s clothing is sold without tags, and it’s impossible to know who the manufacturer is. The sellers of course claim that this is Poland and Turkey. It seems to me that this is a cheap China cloth like glass, it is unpleasant even to touch, — told the “Today” donchanka Eugene Litinskaya. The end point of my hike was the “school fair” in one of shopping centres of Donetsk. One blouse for girls “pulled” for 1500 rubles (643 UAH according to NBU rate. — Ed.) pair of shoes is 2500 rubles (1071 UAH) — and it was sale! I came home, ordered in the Ukrainian Internet-shops, two pairs of pants, two skirts, school shirt and two sweaters, two pairs of shoes and a school backpack. For all this I paid nearly 3 thousand hryvnias — in 2-2,5 times less than in Donetsk”. 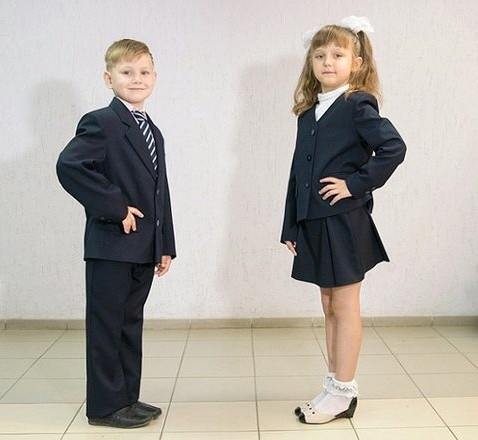 Form. Such clothes made for first graders Lugansk

The schools say they understand how difficult and expensive cost parents training children, and therefore in some schools allegedly lifted the mandatory fees to the Fund of the class and school.

“We are a second year is not officially collected from the parents nothing. They throw on any need — to change desks or door in the classroom. Typically, the contribution amount is 100 rubles (43 UAH) per month, but for some, and this amount has become unaffordable. These parents offer money instead of your service — wash, paint, repair,” — said the Director of one of Donetsk schools.

Parents occupied part of the Luhansk region are seriously concerned about the decision of “authorities” to introduce a mandatory school uniform. About innovation in the so-called “Ministry of education and science “LC” talking back in March. Say, such solution supports a significant part of educational institutions. However, people complain that the form developed by the local designers, not cheap by local standards. So, the suit will cost 2100 rubles (900 UAH), blouses — 600 rubles (257 UAH), a sundress, skirt or pants 800 rubles (343 UAH) by unit.

“I’ve always tried to pick up her daughter something more classic, and make it practical in everyday life. To buy school uniform I am personally not ready. Well, there are comments in the diary — so will be” — says Lugansk resident Natalia Starling.

However, the first-graders of the so-called “authorities” promised to give for free. “But, as always, not without insanity. We are still in early summer, the school asked the size of clothes. And the son over the summer, grew up and skipped an expected size!” says luganchanka Irina.

THE RULERS WILL DO PROPAGANDA

A solemn line on September 1, traditionally, is not without propaganda. As told by teachers of schools of Donetsk, the lines they are expecting various guests, including from the ranks of the militants. “Must be the anthem of the “Republic” and require reading children “Patriotic” poems. The musical accompaniment is also under strict control — the preference of only the songs of the Russian performers. I know that in one of the schools kicked out the Director, that somehow “unpatriotic” has issued the last call. And most interestingly, she was one of those who very actively supported the “DNR” and quickly eliminated Ukrainian classes in the school”, — says a teacher of one of educational institutions.