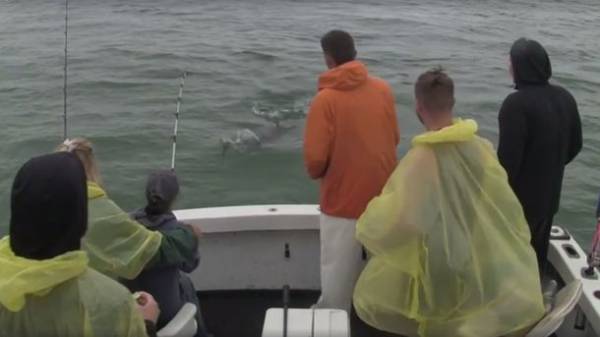 White shark stole the catch from the tourists fishing from a vessel in Cape cod Bay off the coast of the U.S. state of Massachusetts. Video of the incident published in Facebook the captain of the 11-metre boat Stunmai II hap Farrell (Hap Farrell), it drew the attention of the publication UPI – reports “Tape.ru”.

In the first case, a four-meter shark caught up with the ship and caught striped bass that was caught by one of the fishermen. On the hook was the head of the fish.

The second incident occurred on the same day with another group of tourists. A three-meter shark was fully out of the water with a perch in its mouth. Anglers responded to jump with excited cheers.

Great white shark — one of the largest predatory fish in the world. The average members of this species grow to 4.6-4.8 meters in length, but some specimens up to a length of six meters. Considered the most hazardous to human species.

Earlier it was reported that the diver for the experiment cut my hand surrounded by sharks.