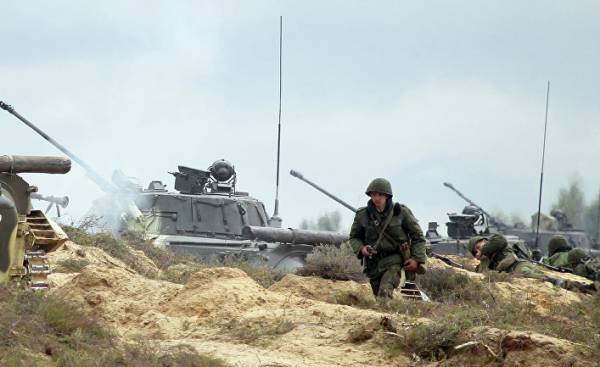 The first Russian soldiers have already arrived in Belarus, and anxiety have long been here. Planned joint Russian-Belarusian military exercises “West-2017” has caused in the region strong concern. Ukraine and the Baltic States and Poland feel threatened. But Moscow is the logic of these exercises are necessary because Moscow sees a threat to NATO.

Recently, Ukrainian President Petro Poroshenko met with his Belarusian counterpart Alexander Lukashenko, it had to go mainly about one subject: about the exercises “West-2017”. Back in the spring Lukashenka assured Ukraine that during large-scale exercises a single tank on the Belarusian territory has crossed the Ukrainian border. But Kiev fears that Russia may use the exercises for “aggression against any European country”. In any case, the Independent newspaper quotes the Minister of defence of Ukraine Stepan Poltorak.

But worry and rest. First of all, Poland and the leadership of the three Baltic States and NATO itself. Exercises “Zapad” held since 2009 every four years, but this time Europe has responded much more sensitive than before. This is the first exercise from the beginning of the conflict in Ukraine and a severe political crisis between Russia and the West over the annexation of Crimea.

Exercises will be conducted from mid-September for nearly one week. According to Moscow to participate in 12.7 thousand military personnel. 1st guards tank army, which was formed during the Second world war and reconstructed in 2016, also should be there. Panzer army was re-established by Russia to intimidate the West.

Moscow is usually pre-inform NATO about the numbers. But the Western defensive Alliance doubts that data passed in are true. Although NATO Secretary General Jens Stoltenberg, the received information arranged, he stressed that the number of troops will be questioned by member States of the Alliance. The previous exercises demonstrate that Moscow used “substantially more troops” than stated. “The Vienna document on confidence-building measures and security” provides that if the exercise involved more than 13 thousand people, then the teachings should be allowed observers from other States. The number of troops of Russia and Belarus, participating in the maneuvers, does not reach this threshold. In the “West-2017” to their 300 soldiers less, but according to Lithuania — tens of thousands more.

Defense Minister Raimundas Karoblis (Raimundas Karoblis) even talked about 100 thousand Russian soldiers, with which President Vladimir Putin allegedly is going to “validate NATO.” Lithuania fears that after the end of the exercise, soldiers can be left at the borders of the EU. “A serious concern is the fact that they are not going away, and that’s not paranoia,” the newspaper quoted New York Times one of the generals of the United States.

Belarusian opposition politician Mikalay Statkevich, a former presidential candidate, also considers it possible “that as a result of the exercise we can get thousands of foreign troops on its territory and loss of independence.” The suspicion is rejected, the President of Belarus Lukashenko. “How will the troops entered, so they are here and gone.” The two fraternal Slavic States emphasize the “defensive” nature of the exercise, therefore, for the Minister of foreign Affairs of Russia Sergey Lavrov about the cancellation of the exercises cannot be considered.

Charges on the one hand, a verbal counterattack on the other, the present time is daily. Psychological cycle, which exacerbates the distrust. In 2014 Russia annexed Crimea, sending “little green men”, soldiers without insignia on Ukrainian Peninsula. This caused an increasingly rapid exchange of blows by conducting military exercises. In any case, the number of training maneuvers over the last three years has increased. According to Russian defense Minister Sergei Shoigu in 2017 assigned to more than 2.8 thousand exercises of different nature. In the spotlight large-scale maneuvers. Only by the logic of Moscow to the West unfairly expressed concern after the Crimean experience, but Russia should fear NATO aggression.

Shoigu regarding the “West-2017” pointed to the increased activity of NATO. Russia “has to undertake appropriate defensive measures”. Under this Moscow implies that the West exercises in the Baltic sea “Baltops”, the NATO exercise “Noble Jump” in Bulgaria, Romania and Greece, “Saber Strike” and “Sea Breeze” on the Black sea, which involved Ukraine. Russia, which considers itself surrounded by NATO, meets “West-2017” for the stationing of a few battalions of NATO in Estonia, Lithuania, Latvia and Poland, the total number of soldiers which is about 4.6 thousand soldiers, although they, in turn, were placed there only in response to the annexation of Crimea and because of the fear of Eastern Europeans.

Intimidation or a real threat? That depends

NATO again practiced an old tactic, decorated with new appliances. Such army as the US army and the Bundeswehr, after years of operations outside of their areas of responsibility, for example, in Afghanistan, and now only pay attention on not to lose sight of the classical mission of armed forces: the defense of the country as part of the NATO Alliance. This echoed the rhetoric of the cold war, and indeed, such a thing as a “Fulda corridor”, i.e. the place, where the NATO felt the most vulnerable to the Soviet Union, was changed to “Suvalki corridor”. This refers to the area which, on the one hand, connects Poland and the Baltic States with NATO, and on the other hand, Belarus and the Russian exclave of Kaliningrad. As a result of funded Pentagon research, for example, the Rand Corporation developed scenarios for which the Russian soldiers could be in for 60 hours to penetrate into the Baltic capitals, which NATO practically nothing to oppose. Intimidation or a real threat? Depends how you look at it.

Distrust of the teachings of the “West”, anyway, great. His contribution made and recently conducted joint exercises of the Russian-Chinese Navy. Although they are held annually since 2012, this time they took place not in the distant Pacific ocean, and the Baltic sea, near Kaliningrad. The Minister of foreign Affairs of Lithuania Linas Linkevičius (Linas Linkevičius) saw in them “a potential threat to stability in the region”. At the graduation exercises of the Russian Vice-Admiral Alexander Fedotenkov said that the exercises were “not directed against any third state”. But so signal was given on the Russian-Chinese solidarity. Just in case, US also want to send a signal; according to the Lithuanian President Dalia Grybauskaite (Dalia Grybauskaite) during the maneuvers “West-2017”, the number of patrolling fighters USA will be doubled.