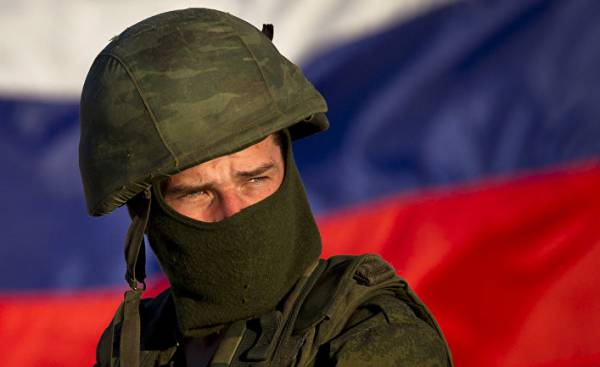 “Such decisions are taken once in a hundred years,” says the VoiceOver in the trailer of the film “Crimea”, the big-budget Russian blockbuster, which shows the capture of the Peninsula by Russia in 2014.

In this film, which will premiere in Russia in September, shows Russian soldiers, tanks, planes and a love story that the Director has called the story of Romeo and Juliet.

The annexation of Crimea by Russia, which provoked the imposition of sanctions and the sharp cooling in relations between Moscow and the West, was declared illegal throughout the world. Meanwhile, in Russia, this event is depicted as an achievement that proved that it again became a great power, having survived a long period of humiliation that began after the collapse of the Soviet Union.

And the pride of Russia is reflected in the film “Crimea”. In the center of the story is love story of a young Kyiv journalist, who supports the Pro-European uprising in the Maidan, and resident of Sevastopol, which after the victory of Euromaidan in Kiev joins the ranks of Pro-Russian resistance.

According to the Director Alexey Pimanova, this film is dedicated to the Ukrainian and Russian officers who refused to shoot at each other and managed to prevent large-scale bloodshed in the time of the seizure of Crimea. “We wanted to make a film about how we should love each other, not shoot each other,” he said.

According to Pimenova, after he helped the family of his cousin to leave Lugansk, which has become one of the epicenters of fighting between Russia-backed separatists and Ukrainian government forces, he wanted to make a film about how Russia’s invasion of Crimea prevented a bloodbath.

Meanwhile, in Ukraine and in other countries, this film is likely to be perceived as an attempt to glorify the annexation of Crimea. Critics of Russia said that the bloodshed in East Ukraine started in the first place due to the fact that Russia has transferred weapons and military across the border.

“Crimea” does not show in Ukraine, where Pimanov 2014 is persona non grata where he was in the sanctions list, which also includes other Russian journalists and cultural figures, which Kiev considers propagandists of the Kremlin. In fact, this film is unlikely to show anywhere except Russia and Belarus. Earlier in August, after the theaters started to show the trailers of the film “Crimea”, Ukrainian Embassy in Belarus sent a note of protest to the Ministry of foreign Affairs of this country.

Pimanov insists that this film is not propaganda, adding that the main character is a really friendly girl and a sincere supporter of the ideals and goals of Euromaidan. However, there is no doubt that this film reflects the Russian point of view on the events of March 2014, one of the sponsors of the film became the Ministry of defense of Russia. Pimanov personally acquainted with defence Minister Sergei Shoigu, and, according to him, the idea of creating this film belongs to him.

“Once, in March 2014 we were talking and during the conversation realized that these events have global significance. He said, “Try to film it””. According to Pimenova, Shoigu helped to find planes and other military equipment used in the process.

After the annexation of Crimea, Vladimir Putin’s rating, which was down sharply rose to a record 86% amid a wave of nationalistic fever sweeping Russia. “Our Crimea” became the most popular slogan, and “return” Crimea — so these events are called in Russia — was positioned as proof that the country is once again able to defend its interests in the international arena.

Date of presidential elections which will be held in 2018 and which, as expected, Putin will take part and win, was transferred on March 18 to mark the fourth anniversary of the official annexation of the Crimean Peninsula. The Kremlin hopes that the unification election day with the anniversary of the annexation of Crimea will cause a surge of patriotism and increase voter turnout.

Crimea was part of Russia within the Soviet Union, but in 1954 Nikita Khrushchev approved the transfer of the Peninsula Ukraine, so many residents of the Crimea always consider myself more Russian than Ukrainian.

But not all the inhabitants of the Crimea supported the annexation: the majority of Crimean Tatars oppose this step. Currently, some of them are under investigation in connection with the clashes between Crimean Tatars and supporters of Russia, which happened in the period of the annexation, and many others complain that they are persecuted and trying to intimidate them.

The Crimean Prosecutor’s office insists on eight years of imprisonment for Akhtem chigusa, one of the leading politicians who defend the interests of the Crimean Tatars. In his closing speech in court earlier this week, his lawyer, Nikolai Polozov, said that Russia is behaving as a fascist state, and compared the seizure of Crimea with the Anschluss of Austria by Nazi Germany.

But Pimanov does not pay attention to such comparisons: “Many Westerners do not understand what happened in the Crimea. It was the will of the people.”