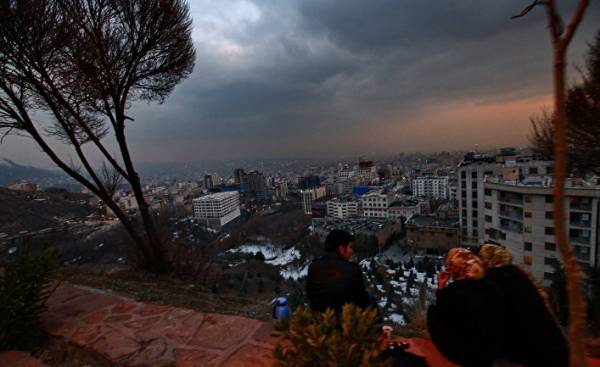 Vice-President of the Islamic Republic of Iran, the head of the Organization of cultural heritage, Handicrafts and tourism said: “One of the most important steps is to eliminate those drawbacks that are associated with a lack of our knowledge and understanding of the travel market, and it should be put on the agenda as soon as possible. Russia is a huge potential market for our tourism industry; and we must take on this huge market its definite place.”

According to service of public relations in the organization of cultural heritage, today, Saturday, the 27th of the month mordad 1396 [corresponds to 17 June 2017, the European calendar — approx. transl.] a meeting of workers of the tourism industry, in which participated Ahmadipour Zahra (Zahra Ahmadipoor), Vice-President of Iran and head of Iran cultural heritage, Handicrafts and tourism industry, Murtaza Muchhad (Murtazah Rahmani Mouahhed), Deputy head of the Organization Department of tourism, Ibrahim Eurfrac (Ibrahim Yourfaraj), head of the Association of tour operators of Iran, as well as the heads and representatives of tourist firms and organizations, working directly on the territory of Russia.

During this meeting, Ahmadipour, noting that following the holding of such meetings will certainly be performed important practical steps and measures, also stressed: “the Fact that we have not yet succeeded in attracting tourism from those countries with which we have very good political relations, is a story that needs to be subjected to most careful and most serious study”.

“The President of Iran, she continued, — during the celebration of nooruse [name of the Iranian new year holiday falling traditionally on March 21, approx. transl.] also touched upon this topic, I asked the question, why is our number of tourists from such countries as Russia, Turkey, Georgia, etc., occurs and develops only in one direction, and what measures and what program perform leadership and service Organization of Iran cultural heritage, Handicrafts and tourism industry, in order to align and balance the tourist flow between Iran and the mentioned countries.”

Vice-President of Iran, noting also that the practical measures and programmes are steps in these areas must have a specific and concrete nature, added: “the Elimination of gaps that are associated with a lack of our understanding of the travel market, should be an important and priority agenda item. Russia is a huge market for our tourism industry and we should certainly take on this huge market its definite place.”

“Development projects of different kinds of campaigns and activities, the increased presence at exhibitions, master-classes, trainings and seminars for tour guides tour groups, training of guides who speak Russian, the translation and publication, in the form of magazines and brochures, information about attractions of the country in the Russian language, and issues related to the cost of tours and package tours are among the most important steps to be taken to buy the most worthy place on the Russian tourist market. These are all questions that are on the agenda of the Organization. But the most important part of these programmes is the development of various forms of cooperation with private business”, — continued the head of the IRI cultural heritage, Handicrafts and tourism industry.

“You need to perform several steps and preparatory measures aimed at redressing the imbalance in tourist traffic between Iran and Russia on the gradual alignment of the number of tourists traveling to Russia and coming to our country. But this important task could not be solved without the contribution of individuals and private business,” she added.

“Organization of Iranian cultural heritage, Handicrafts and tourism industry, providing support to the private business and initiative groups working in this area, and she is also working carefully and meticulously to carry out the necessary practical steps and measures” — continued Ahmadipour.

“A particularly important topic in this regard, which should also pay particular attention to is the use of those opportunities which will provide carrying out in Russia of world football Championship. We need to use at the proper level the potential and the opportunities that are associated with it,” said the head of the Organization.

Vice-President of the Islamic Republic of Iran added that any travel Agency that arranges trips outside the country should also “study the issues and the entry of tourists from Russia to Iran and have their program on this occasion”.

Murtaza Machhad, head of the Department of tourism at Organization of Iran cultural heritage, Handicrafts and tourism, at this meeting, also, for its part, said: “Russia is one of those countries that are a priority and goal in terms of the development of our tourism industry. During 3 last years the topic of expanding cooperation between Iran and Russia on the lines of tourism was one of the most important that were discussed on the agenda of our bilateral cooperation”.

He continued: “the Program of joint steps that we have signed with the head of the Federal Agency for tourism of the Russian Federation, and the holding of meetings on the implementation of the points of this program is also one of the most important steps that have been undertaken on tourism development and tourist traffic between the two countries. And these meetings eventually culminated in the initiation of the process of the abolition of visas for tourist groups coming from Iran to Russia and back. However, the completion of the process of the abolition of visas with the Russian side was long and took a long time.”

“A preliminary consultation with the Embassy of Iran in Russia, we also held several meetings with the Executive Director of the Association of tour operators of Russia, during which it was decided that in October 2017, will host a study visit of the delegation of Russian tour operators in our country. The purpose of the trip will explore our potential for development of tourism and attractions of Iran. The official host for the Russian tour operators will be the Association of tour operators of Iran and Organization of Iranian cultural heritage, Handicrafts and tourism is also committed to support this event,” continues Rahman Muchhad.

The head of the Association of tour operators of Iran Ibrahim Eurfrac who participated in the meeting, said: “the Russian travel market is huge and important to us, and in order to achieve success, it is necessary to develop a very serious and targeted programs.”

“Ideas of Russians about Iran is very weak and small. On this basis, the participation in exhibitions is one of the important goals in this area, and it can also lay the Foundation for exploring and presenting the Russians about Iran, its attractions and possibilities of the country,” he continued.

Another Eurfrac added that Iran, for its presence in a very important and attractive Russian tourist market, “it needs initial investment, in order to more effectively conduct PR promotion of the country and its attractions, and to inform on the potential market need for information about Iran.” Similar problem, he said, must take the state. He added that the need to resolve the issue of fares for package tours. According to Surfarce, it is “also one of the important tasks that must be solved, because currently 45 to 50% of the cost of a tour to Iran is connected with the hotels.”

Travel to Iran is expensive

Also in attendance at the meeting, the Executive Director of travel Agency “Rastina” Gambar Akbar (Akbar Ghamghar) said: “the Russians, in order to escape from the extreme cold, long frosts, extend the Sunny season, and for the treatment of various ailments associated with vitamin deficiency and lack of vitamin B, are traveling in countries such as Turkey, Egypt and in Dubai.”

“Russian tour operators have very little understanding about Iran and about the opportunities that we have in the country. On the other hand, another reason why the Russians do not go to Iran is a very large expenses associated with this trip. But there is another problem where we are losing this very important and attractive for us tourist market is a shortage of guides who speak Russian,” he continued.

“The Russians do not really travel in order to get acquainted with the monuments of history and culture, and mostly for the sunshine and take advantage of the Sunny weather. We must strive to create opportunities and infrastructure, taking into account the specific needs of tourists from Russia”, — said Gambar.

“Russia’s 25 million Muslims, and we can work out the appropriate program, given these opportunities”, — added the Executive Director of travel Agency “Rastina”.

The Russians are also interested in monuments of history and culture

Also present at the meeting, Mohammed Alishahi, Executive Director of another travel Agency “Shokouh-e Iranian” he said: “Contrary to the words of Mr. Hamara, I am convinced that the Russians are traveling abroad not only because of the sun, and they also will be of interest visit and inspection of our cultural and historical attractions”.

He also continued in this regard: “as an example. In the past year, a group of tourists who arrived in Iran as part of a tour of Russia, visited and toured the city of Isfahan, Shiraz, Yazd and Kashan. According to guests, for them it was a great pleasure to visit all the monuments and sights [in these cities — approx. transl.]. We should have package tours that include all aspects, and we should not be restricted to only one subject and one direction.”

In Russian market we have many competitors

Muhammad Ali Ashraf, Vaghefi, Executive Director of the tourist company “Iran-Dastan” at the meeting, pointing out that the mechanism and functioning of the tourist market of Russia has many differences from other regions of the world, explained: “If we succeed in attracting the Russian tourist market, we will also be able to bring to Iran and the tourists from the Central Asian States”.

“Our task in the Russian tourism market is very difficult, because we have many competitors, he continued. — In the framework of the cultural days of the [Iran — approx. transl.], as well as, maintaining liaison with the offices of companies and agencies that work in Russia, we must use every opportunity to acquaint the people of Russia and the Russian tourist attractions of the country.”

PR companies should be targeted and regular

Roxanne Karampour, Executive Director of travel Agency “Setara Haftrang” during this meeting, pointing to the results of their research on Russian culture and the interests, customs and habits of the Russians, said: “the Russians almost did not have information on historical sites and monuments of Iranian culture. We, therefore, traveled almost the whole of Iran, collected all available information on the attractions of the country, and then moving it, published in our cyberspace.”

She also said: “Russians are a people who believes that it can sacrifice if necessary, and draw in Iran tourists and with the small [material — approx. transl.] opportunities. Advocacy and public relations companies should be targeted and regular, that they bring the best results.”