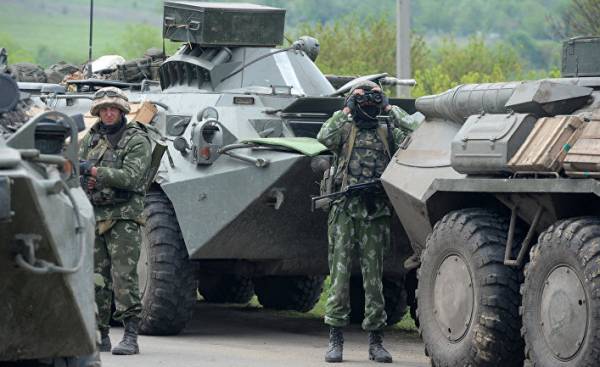 Although officially, the US does not put Ukraine offensive weapons, from the leaking of documents, it became clear that actually, despite prohibiting it at the moment, American law, Kiev signed an agreement with AirTronic USA purchase of 100 rocket-propelled grenades PSRL-1 554 574 dollars.

The agreement was signed on November 11, 2016 with the Obama administration three days after winning the Donald trump. Apparently, Obama decided to finally spoil the life of the successor…

According to currently available data, these grenade launchers were delivered to the national guard and, in particular, the battalion “Azov” (the organization is prohibited on territorii of the Russian Federation — approx.ed.) in violation of existing bans the sale of weapons and training Ukrainian neo-Nazi groups.

Meanwhile, on 7 August, Poroshenko launched a campaign to mobilize Ukrainians in age from 20 to 27 years in the national guard within the framework of compulsory military service. It is worth noting that the national guard and neo-Nazi battalions are most actively manifested itself in the beginning of the war in the Donbass, when the regular army refused to fire on civilians.

All this points to the intention Poroshenko to resume soon the fighting in the Donbass, as recently told the leader of the Donetsk people’s Republic. These words were confirmed by the movement of heavy weapons to the front lines with the Ukrainian army, which does not shy away from placing artillery in residential areas, for example, in the same plant.

Or destruction of the chambers of the OSCE, which are not allowed to act in total impunity, for example, shoot at a water treatment plant in Donetsk. Just a day after installation, the camera was so badly damaged by the Ukrainian army that stopped working, and observers of the OSCE had to pick her up.

The staff of the Joint center for control and coordination (JCCC) are hardly more secure than the camera of the OSCE, since last night at 22:30 Ukrainian army shelled with tanks and mortars the Nameless village including the post of observers SCCC, forcing them to take refuge in the shelter.

Just over the past day Ukrainian army 54 times violated the ceasefire, firing a total of 315 rounds banned by the Minsk agreements of caliber, including 30 artillery shells of caliber of 120mm and 152mm, with 34 of a tank shell and 251 mortar projectile 82mm and 120mm.

The number of violations from the Ukrainian army and the number of shells is prohibited caliber is steadily growing, this is not to mention firing on OSCE observers and the SCCC and their equipment. This means that Ukraine is increasingly ignored its obligations under the Minsk agreements and is looking for war.

DNR, in turn, still supports peaceful settlement of the conflict, continuing negotiations on the draft of the new state, which should replace the Ukraine. The head of the DNR has received numerous comments on this matter, and although the idea of reorganization of States has broad support, the name “Ruthenia” is not met with a positive response.

Anyway, there is nothing to worry because, as said from the beginning Alexander Zakharchenko, the main goal is to initiate a broad discussion and to consider the proposals of each, to form attracting the greatest number of people project.

Again, most do not like this name, will be found a new in agreement with the population. This precisely is the principle of democracy and values that the head of DNR stands for and wants to base the new state. The main thing is not the name, and the Foundation of the new state.

Ukraine is in this perspective becomes an example of what not to do. Thus, the Ukrainian trade Union of journalists reported 40 cases of physical aggression against its members during the first half of the year. Even in areas that have nothing to do with the conflict in the Donbass. The attackers go unpunished, which only contributes to new forms of aggression.

It is worth Recalling that after the Maidan in Ukraine, killing several journalists and employees of media, including (partial list): Andrey Stenin, Anatoly Klyan, Igor Kornelyuk, Anton Voloshin, Andrea Rochelle (Andrea Rocchelli) — they all died in 2014 in the Donbass as a result of deliberate shelling by Ukrainian army (and that was often known that it was about the journalists). Oles Buzina died 18 April 2015 in Kiev after their personal data appeared on the website of “the Peacemaker.” 20 Jul 2016 Sheremet died in Kiev in the explosion of his car.

Given the gaining strength of clashes between Ukrainian neo-Nazi battalions and the regular army, chaos in the country will only grow. So, 59th brigade of the armed forces fired on the positions of the “Right sector” (organization banned in territorii of the Russian Federation — approx.ed.) the Food from systems “Grad”, which, of course, had not the taste of the Nazis, who decided to take revenge. Fighters of “Right sector” went to the area of responsibility of the 59th brigade on the bus, armored vehicles and trucks.

Not retreating at the sight of this Ukrainian commander led the local unit to combat readiness and intends to shift potential losses to attacks by DNR. Well, when there is a fault, even if the army falls apart, and the battalions squabbling among themselves.

It should say that Ukraine is approaching the point of no return. She’ll have to start a war again (albeit losing), because otherwise the government will have to admit to the people responsible for the devastation of the Maidan.