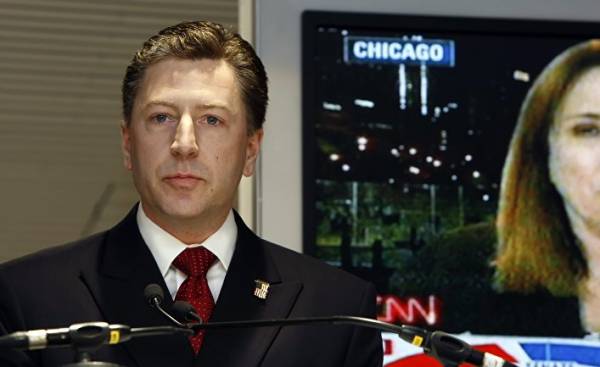 Scheduled for a late August visit to Moscow of the Commissioner of the United States Ukraine, Kurt Volker, will, it seems, in the first place, under the sign of the new us sanctions against Russia and discussions about the possibility of granting Ukraine lethal defensive weapons. Interlocutors “Apostrophe” to indicate a strategic turn Washington in the Ukrainian question, meaning more tight dialogue with the Kremlin. Part of the turn just was the appointment, Kurt Volker, the state Department’s special representative to Ukraine. The mentioned meeting for the Russian leadership seems the last chance to reach the positive dynamics in relations with the United States. However, we have reason to expect from the talks of breakthrough results, not so much.

Shortly after his statements on expediency of granting Ukraine lethal defensive weapons, US special representative for talks on Ukraine Kurt Volker will meet in Moscow with assistant to the President of Russia Vladimir Putin, Vladislav Surkov. Officially, the meeting date has not yet been announced. Russian journalists, citing diplomatic sources said that it is most likely talking about the last weeks of August. Visit of Volker in Russia was preceded by a meeting of foreign Ministers of the US and Russia to the Philippines capital Manila. Among other things, discussed the Ukrainian question. According to U.S. Secretary Rex Tillerson, Russia showed “some willingness” to negotiate ways of settling the conflict in Ukraine.

Special envoy for the Ukrainian settlement, Walker was appointed a little over a month ago, on 7 July. His statements, he met expectations, because the U.S. environment spoke about Walker, in the past after the US in NATO, as a typical “hawk”, from which we should not expect any overtures to Moscow. Thus, the view that granting Ukraine the American of defensive weapons will only exacerbate the situation in the Donbass, Walker in late July called simply incorrect. According to him, the administration trump is considering such a move. Last month, the state Department spokesman called for the East of Ukraine, then called the conflict of the real hot war. And met with officials from the EU, NATO, Germany, France and the UK.

The above-mentioned meeting take place against the backdrop of a new round of aggravation of Russian-American relations caused by the new sanctions of the USA against Russia and retaliatory measures of Moscow. Donald trump signed the law in early August. The Kremlin responded with a demand to reduce the number of U.S. Embassy staff in Russia for 750 people.

“The figure of the Walker associated with a certain twist in the strategic U.S. approach to the resolution of the Ukrainian-Russian conflict, — said in comments “Apostrophe” political analyst at the Institute for Euro-Atlantic cooperation Vladimir Gorbach. — The supply of weapons, in fact, would be a serious step forward, and even cancel the actual embargo on arms and components. But the most important evidence of this reversal was the policy of sanctions by Congress, which means that the US are in direct contact with Russia and negotiations Volcker with the Russian representatives will conduct a much more intense and Frank conversation than the one that was conducted in the framework of the “Normandy format”. The United States begin to more severe pressure on the Russian side. Will combine all means: diplomatic, economic (through sanctions), and military-military (through the help of weapons to Ukraine)”.

The agenda of the meeting

Invited expert at the Kennan Institute, managing editor of the online magazine Intersection Anton Barbashin of the opinion that Surkov’s meeting with Volcker is a “last hope of Moscow” to achieve at least some positive development of relations with the new U.S. administration. “After the adoption of the sanctions law, the future of Russian-American relations seems to be extremely pessimistic, so any opportunity to negotiate Donbas, at least, try to avoid the radicalization of the US position on this issue — last chance before this relationship should give up,” he said.

Moscow believes Barbashin I will try to present arms supplies to Ukraine as a step towards escalation. The other major argument is that direct American-Russian dialogue can supposedly be more productive: “the argument is simple — the supply of lethal weapons will increase the risks for all parties and certainly will not lead to the pacification of the conflict. The only solution to the conflict within the Minsk, the translation of the dialogue in the format of a Washington — Moscow”.

“I think that this would indeed be a very important meeting — said the “Apostrophe” program co-Director of foreign policy and international security Razumkov Center Alexei Miller. And statements to be made at the end of the meeting, perhaps Surkov, but not necessarily Mr Walker — I will not say that will reveal a lot of details, but they will give us to understand what may be the future, so to speak, a roadmap of the conflict settlement in the Donbass. The negotiation conditions have changed significantly compared to what it was before the advent of the new presidential administration of the USA. On the basis of the statements made by Walker, and some other facts — I would like to mention the flights of American strategic reconnaissance UAV over the territory of hostilities — obviously Walker will come not with empty hands”.

According to Alexei Miller, Walker is unlikely to take the time to listen to the Russian version of events in the East of Ukraine. In addition, it seems that Walker, in the tradition of American policy, acts within its powers and is not obliged every small step to discuss with the White house. Therefore, it should be expected a more serious negotiating position. The expert adds that the results of the meeting are likely to be. But some will only be able to make clear statements. Perhaps they will affect the decision on providing Ukraine with lethal defensive weapons.

Researcher, Institute of world history of NAS of Ukraine Sergey Tolstov believes that, unlike former U.S. assistant Secretary of state for Europe and Eurasia Victoria Nuland, Kurt Volker gives the impression of a “serious expert with extensive diplomatic experience.” He agreed with the view that Volcker was given a “very wide discretion”.

“Walker will not be involved in the various intrigues and try to accurately understand the depth positions of all parties involved. His trip to Europe was fundamental — it is, in fact, met with all the people whose opinion is relevant to the problem,” Tolstov said “Apostrophe”. At the meeting with Surkov, you can expect some concrete proposals for settling, and trying to understand whether Moscow is ready to participate. The Kremlin, experts say, obviously interested in such a meeting because it desires to continue negotiations on Donbas, Syria, and North Korea. And while the Russian leadership is not to focus on the new us sanctions, because he understands that their introduction reflects, in particular, the conflict of powers in the United States.

Moscow is the visit interesting. The Kremlin may feel that a direct dialogue with the United States, instead of the discussion in the format “Norman Quartet”, for it is more profitable. But is it really?

The white house had been unable to make significant concessions to Moscow. Tillerson is obliged to stick to the presidential line on improving relations with Russia, while simultaneously not giving Congress reason to suspect the White house in the surrender of American interests. Turns out, after another public confrontation between the US and Russia concessions even less likely. And no matter what was Europe’s reaction to the fresh us sanctions, what do the statements of the German politicians of the second echelon on the need for time to “forget about Crimea” and go to detente with Russia, U.S.-Russian relations are far from optimal. Washington (if you take it whole, with the Congress), and Moscow is not ready to substantial concessions, including the Ukraine.

Sergey Tolstov indicates that the US is not going to become a party to the Normandy format or its alternatives. And this format remains the key to resolving the conflict in the Donbass. The last meeting in the “Normandy format” held last fall. It is expected that soon the representatives of the Quartet try to negotiate a new one.

From the meeting with Surkov Volcker Tolstov does not expect any progress in the political settlement of the conflict on Donbass: “to Assume that Volker about something agree with Surkov, the Kremlin is happy to support, despite the fact that with [ex-foreign Minister of Germany Frank-Walter] Steinmeier and [former foreign Minister of France, Jean-Marc] Ayrault was easier to agree — I see no reason for such a situation. Moscow will not hand over their positions and make concessions without understanding their own benefit”.

Similar opinion is shared by Anton Barbashin He indicates that Washington still can’t afford to look weak and, especially, to compromise without serious winnings. Hardly ready for them.

“Some uncertainty still remains. Moscow deliberately took a pause with the answer to sanctions of the law and, apparently, waits for the end of negotiations Volcker — Surkov. But it was probably an illusion”, he concluded.

Vladimir Gorbach agrees that the meeting is unlikely to bring breakthrough results. Almost certainly the Russians will continue to stick to their line and will try to respond asymmetrically and indirectly: “I would not expect from the Russians concessions. I think they will tolerate his teeth. At least until the presidential election next March. Can the Russians go for some escalation? Can, but very carefully and preferably not with your hands, and North Korea, Assad, or even some other. Meanwhile, still to endure, endure and endure again…”