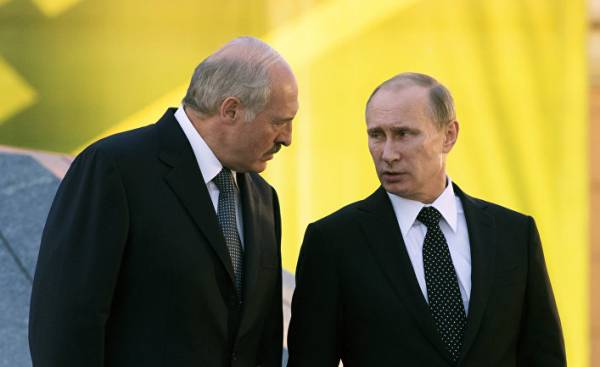 In the days of the ninth anniversary of the Georgian-Russian war, the then leader of Georgia Mikhail Saakashvili said that the next target will be Belarus. “What we see in Belarus — I think that Russia is going to occupy and Annex Belarus. During the exercises will be brought infrastructure. Thus, the threat has not disappeared, it only increases. Just now the Ukrainians its delay on its borders”, — Saakashvili said, briefly came to Lithuania.

According to him, NATO is now more realistically assesses coming from Moscow danger, so the threat to the Baltic countries less than a few years ago, but the risk of betrayal of the West is preserved.

49-year-old Saakashvili is currently stateless. Last month the President of Ukraine Petro Poroshenko has deprived him of Ukrainian citizenship. Saakashvili has said that Poroshenko did so, fearing the growth of its popularity.

“The real reason I became overly serious opponent. His popularity is very low, and my rapidly increasing. We start to find common ground with other opposition leaders. Since the election of Viktor Yushchenko (former President of Ukraine — approx. ed.) or since the start of his presidency, nobody else has collected such a crowd which collected in Ukraine, I support companies is huge. He became nervous, became jealous, and decided therefore to get rid of his opponent,” said the former leader of Georgia.

He said he wants to return to Ukraine to defend their rights in court. “Now go to Europe. From Lithuania leaving today, will visit several European countries, then his supporters are going to return to Ukraine. From legal terms (terms) of the purpose of the meeting (the court) will depend on when I’m with supporters in Parliament and society of Ukraine, I will return to Kiev to fight in court,” he said.

Saakashvili came to power in Georgia during the “rose Revolution” in 2003 that toppled former President Eduard Shevardnadze, the former foreign Minister of the Soviet Union. He was forced to leave the country in 2013, when prosecutors issued a warrant for his arrest, accusing him of abuse of office. A year and a half Saakashvili worked as a Governor of the Odessa region, but last year resigned, saying that he couldn’t fight corruption.

Statements about the preparation of Russia for the annexation of Belarus, made during his stay in Lithuania, Saakashvili, not supported by evidence, say the scientists.

“Judging from publicly available information and in recent years, Russia sought rapprochement with the US President and his team, it is very doubtful that the benefits of the annexation of Belarus to the ruling circles of Russia will exceed any damage caused by such act in the international arena”, — said the Director of the Institute of international relations and political science of Vilnius University (VU kopn) Ramunas Vilpishauskas.

According to the Professor, voiced by the former President of Georgia, the warning is not new and appeared when it became known about the Russian-Belarusian military exercises “West — 2017”. However, as the analyst said, more realistic to believe that after the exercise in Belarus may stay more of the Russian Armed forces than now.

According to the lecturer of the Institute of Laurynas of Jonavicius, Saakashvili just juggling words and threats, but does not result any argument in favor of why Russia needs to Annex Belarus and what benefits it will bring to Moscow.

“Yes, it is possible to think that Russia is interested to have a full-fledged military base on the territory of Belarus, but she is just not interested to lose the last ally on the Western front”, he said.