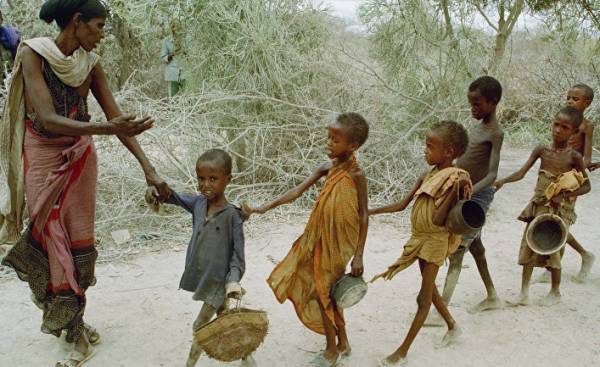 Although almost all regions of the world the birth rate is falling in Africa she is at a stable level and amounts to an average of 4.7 children per woman. This figure is alarming the international community and demonstrates the large discrepancy.

According to the UN, at the end of June, the world population amounted to 7,55 billion. Africa ranked second with a population of about 1.3 billion (16% of the world total), second only to Asia, with its 4.5 billion. And if worldwide population growth is slowing, and Africa, he still maintains a high pace. On current projections, African population will reach 2 to 3 billion by 2050 and will reach 4.5 billion by the year 2100: by that time, the continent will account for 40% of all people on the planet. Thus, between 1950 and 2050 the population of Africa will grow in 11 times, but, for example, the population of Latin America — in 4.6 times. All this is alarming in other regions of the world.

Held from 7 to 9 July in Hamburg the G20 summit Emmanuel macron made clear his concern about this situation, thereby causing an unhappy reaction from the Africans. On the question of the journalist from côte d’ivoire on the need for a “Marshall plan for Africa” (by analogy with what was proposed by European countries after the Second world war), the French President said: “Africa faces a challenge of a different order. Today it is civilizational in nature. If countries a woman still has seven or eight children, they can spend billions never stabilize”.

After that loud statement, we are seeing a return of interest in the demographic issue. When West African parliamentarians decided on 22 July to call on their governments to take policy measures to reduce the number of children per woman to three in 2030, the citizens began to produce in the social media fantasy about the intentions of the Macron. But how things really are? Is it really so difficult to accelerate changes in demographic processes?

For a better understanding of the current situation you need to put the issue of demography in historical perspective, the researchers note. At a particular stage of its development, all societies of the world have resorted to high fertility as opposed to high mortality rates. “I had to give birth to six or seven children to at least two of them had a chance to reach adulthood and also to procreate, to prevent the disappearance of the group” — said the Professor of the Institute of demography and socioeconomics, University of Geneva clementines, Rosie (Clémentine Rossier). In a system where high fertility was balanced by high mortality, the population is not growing. It was not until the XVIII century, when the development of science and economy has changed the situation. Anyway, societies have needed time to adapt, since the birth of large numbers of children for the survival of the group was still firmly anchored in the mores. Changing demographic processes could not pass quickly, and the population continued to grow.

“Europe’s rapid population growth coincided with a massive wave of emigration to America and the colonies. On the background of further change with the industrialization and development of services for success in the new economy children had to be sent to school to try to advance them as far as possible, explains Clementine, Rosie. It means investment in each child. And it is not cheap. This has led to a reduction in the number of children and the new demographic balance.”

At the same time, Africa is experiencing the effect of restoration after demographic of fences as a result of Arab and intra-African slave trade, and sending slaves to America. “In the second half of the eighteenth century was achieved by simply huge numbers. Many hundreds of ships each year were taken from 150 000 to 190 000 prisoners. Growing insecurity in many regions, exacerbated by poor harvests, famine, and outbreaks of local and imported diseases, especially smallpox. The epidemic began,” — wrote in 2007 Louise Marie Diop-Maes, Louise (Louise Marie Diop-Maes), the author of the book “Black Africa, demography, soil and history. Interdisciplinary critical analysis”.

To all this must be added the consequences of colonization: the colonial authorities approved birth-oriented demographic policy on the basis adopted in the metropolis 31 Jul 1920 law.

“The goal was to obtain sufficient labour for resource extraction. In those days contraception was still considered tantamount to abortion, so no one even could not imagine the thought of birth control,” recalls Jean-Francois Kobian (Jean-François Kobiané), Director of the Institute of population, University of Ouagadougou.

Unlike the English part of the continent, where countries like Kenya have been sensitized to this issue in the 1960-ies, most of the Francophone States have realized the importance of changing demographic trends only in 1980-ies, repealing the 1920 law.

Half a century after independence, African post-colonial economy has changed little. It relies on rents from agriculture for their own needs. The state and capitalism has penetrated into all spheres of society, and family is the substrate of the community. Parents consider children to be the guarantors of old-age mentors and the younger brothers and sisters. In the article “Demographic variables and education in Africa or the Mirage of the Millennium development goals” economist and senior research fellow, Institute for strategic and international studies Philip Yugon (Philippe Hugon) writes the following:

“Big family is the main place of production necessary for the existence of wealth, reproduction facilities and the formation of the labour force. The connection of generations, the rights and obligations of senior and Junior compensate for the lack of unemployment benefits and social production, and also contribute to the high birth rate.”

Danish economist ester Boserup (Ester Boserup), in turn, noted the lack of mechanization in agriculture, which requires intensive labor and large families, “where children perform most of the field work, the father of a large family rich, and father of a little family poor.”

Clementine, Rosie believes that the high fertility countries of sub-Saharan Africa is primarily due to the poverty of the region:

“A significant part of the population lives through agriculture. Over the past 50 years mortality has been reduced, including through vaccination. Nevertheless, the economy was not so rapid development. In rural areas families still need a lot more hands, i.e. children.”

Over 50 years in black Africa has been on the tangible progress, says Jean-Francois Kobian. On the background of the development of health since the late 1950-ies on the continent started a change in demographics with the relative decline in fertility.

“In 1960 the number of children per woman was equal to 6.7. Today the average is less than five, and in urban areas it even is three. This means that changes in demography are even still at a low rate,” he explains.

In addition, he called for a guard against hasty conclusions, because the average figures hide strong disparities between regions on the one hand and rural and urban areas on the other. In particular, he indicates the well-developed South Africa, where the family model is characterized by monogamy, and the youth for a long time to learn, which increases the age of marriage. In this region the average birth rate is 2.5 children per woman. The same applies to the Eastern part of the continent, where the demographic situation is changing thanks to the processes in education. Only in the area of the Sahel and the Equatorial region is still observed indicators in six children per woman. This situation is associated with a low level of education of the population, especially in rural environment:

“Take the village girl who finishes school at 11 or 12 years old. She has no chance to continue studying. She remains but marriage? This means that you need to quickly have children. But if she had continued studies, it would postpone family life and motherhood, to pay more attention to the future.”

All the research suggests that the higher the education level, the lower the total fertility rate, i.e. the number of children who can produce a woman. Thus, in Burkina Faso, he is three children per woman in urban centers, four or five children in the suburbs and nearly seven in rural areas.

The acceleration of the process

So what to do? To accelerate the demographic changes in the current situation, when population growth in some countries still is 3% per year, the parliamentarians of the Economic community of West African States (ECOWAS), Chad and Mauritania have committed to the call of July 22, to invite governments to take measures to significantly reduce the birth rate. Was the stated purpose to come to the target of three children per woman by 2030, which caused ambiguous reaction of the population. “It was not a good move from the PR point of view,” admits Jean-Francois Kobian.

The fact that demographic change requires better management at the state level, greater investments in education and health, youth employment, women’s autonomy, access to contraception. All of these perspectives are covered in the call for West African parliamentarians:

“Measures must be accompanied by a competent state policy to ensure that women and young people the full rights in the field of sexual and reproductive health, to ensure investment in education (especially for girls), to promote the formation of productive and decent jobs, to secure effective leadership”.

According to Kobian, if these key questions are solved, the birth rate will decrease by itself without any government regulations. Says Clementine, Rosie, “it is necessary that the rural population has seen the improvement of living conditions, particularly in terms of education and opportunities for young people in the area of skilled employment.” Thus, the goal of three children per woman by 2030, while that seems very optimistic.