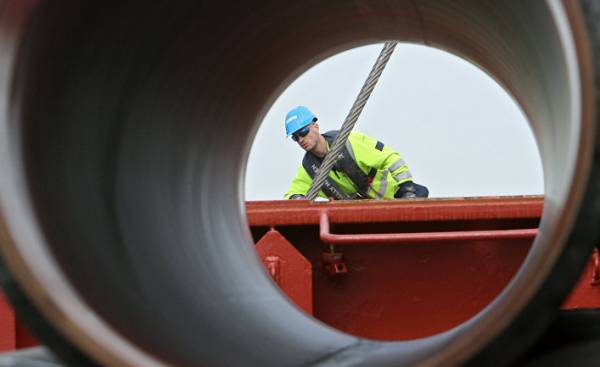 The solidarity of today’s liberal democracies depart on the second plan, when success began to seek different kinds of populists. Therefore, the new democracies of Eastern Europe is not easy to seek inspiration in contemporary Western European politics.

The idea of “America first” threatens the solidarity, because it brings to the fore nationalistic and egoistic action. In the long term the loser will be all but worst of all have a small country with little influence in the negotiations. Not only in North America but in Europe they are building walls in the name of selfish interests.

A subsea pipeline “Nord stream” — a wall in the Baltic sea. This wall separates the Baltic gas market from the European one. Nord stream, connecting the gas markets of Russia and Germany, much more expensive and dangerous for the environment than counterparts.

In addition, the pipeline bypasses Eastern Europe. In 2011-2012, the Europeans could still keep the naivete of the question on the first thread “Northern stream”, “Nord stream-2” is clearly a political tool of the Kremlin.

Gas prices have long remained whip of the Kremlin in relation to the East European democracies and stick to the correct regions of the satellite. The best example of this is the Maidan. After the change of government in 2014, the price of gas for Ukraine has increased so that now the country buys Gazprom’s gas to Western Europe.

Fortunately, Ukraine has three alternatives. And the Baltic States until 2014. Estonia, Latvia and Lithuania were strongly tied to their energy source, the pipelines of Gazprom, which supplies gas from Siberia. The Kremlin’s gas whip was reined in and consumers, and politicians.

Until 2014, when in Klaipeda opened the first Eastern European terminal for gas imports, Lithuania pays for gas most in the world. After launching the terminal price is reduced by a quarter.

The Baltic countries have paid the price for his independent views, in particular, open criticism of Russia, higher price. In September the Arbitration Institute of Stockholm chamber of Commerce rejected the claim of Lithuania is to Gazprom 15 billion kronor (1.4 billion euros). The amount represented the difference between the market price of gas and the price which in 2011-2012 were paid to Lithuanian consumers.

Lithuania argued that the monopoly Gazprom has established unmotivated high price. The problem of monopoly lies in the fact that the buyer either accepts the price or not. Other options do not exist.

“Nord stream” eliminates alternatives to the monopoly gas and reinforces the hegemony of the Kremlin in Eastern Europe. Nord stream is not a commercial project. The first branch is only working at 50% capacity. However, there are plans to build a second pipe to supply Europe Putin gas. This will allow forever to establish control over Ukraine, or at least until the moment when the power will be the new Pro-Kremlin government. In the long term, “Nord stream-2” and get an additional branch to Kaliningrad.

That’s why for us, the inhabitants of the Baltic sea region, “Nord stream” — it is a wall. Neighboring countries must not isolate each other for profit. On the contrary, we should build bridges, such as electrical cable Nordbalt between Nybro in Sweden and Lithuania. After he was commissioned in early 2016, a fifth of imported electricity, which the Baltic States was received from the Russian coal and nuclear power plants, was replaced by imports from Scandinavia about 700 million kroons.

Now the residents of Blekinge there is a rare opportunity to lead by example and to influence international policy. The situation can be compared with the decision of Seattle in the Bank “wells Fargo”, which is financed by a North Dakota pipeline, recently approved by Donald trump.

Blekinge similarly can affect the situation and block the gas pipeline “Nord stream-2”, which agreed Gerhard Schroeder (Gerhard Schröder). The decision is in your hands.